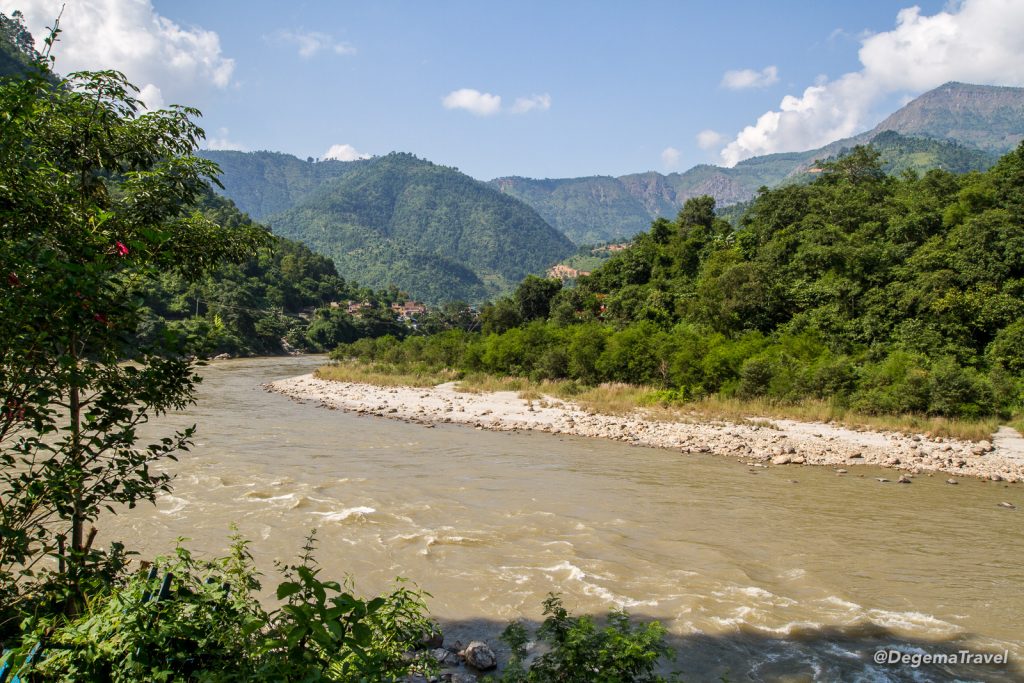 The Long Road to Pokhara

On Wednesday 9th October 2019, I presented myself at the little office of Osho Vision Treks & Expedition P. Ltd for what would be a transit day, though one of the most amazing I’ve ever spent. For the first time in this trip, I properly felt like I was actually in Nepal. Or, to be more accurate, what I suppose I had expected of Nepal.

I left Kathmandu at 11am in a private car – effectively a hatchback, though I didn’t note the exact make and model – with a driver and…another bloke. I never caught his name or his purpose. I think he was just getting a lift some of the way. Anyway, I’d volunteered to sit in the back, partially to allow the two to chat among themselves easily but mostly so that I could sit on one side of the car and stick my feet in the footwell on the other side. It’s not completely comfortable, but it sure beats having your knees jammed in the glove compartment!

After getting out of the traffic of central Kathmandu, we headed west on the main rode towards Gorkha. We had a brief stop just outside the capital to grab some snacks and a cup of tea then continued along the 141-km road. The actual distance between the two points is only about 75 km but, this being Nepal, the road inevitably had to twist and turn the whole way, mostly following the Trishuli River. It’s a good thing I don’t get car sick because I don’t think there was a single stretch of straight road even a single kilometre in length.

The condition of the roads in Nepal meant that it was impossible to make notes in my journal during the five-hour trip. I wasn’t really able to do much of anything, though I didn’t really want or need to do more. I looked out of the windows of the car, taking a few photos along the way, and enjoyed watching this beautiful country go by. Once I reached Gorkha, however, I noted in my journal that “I finally feel like I’m in Nepal”.

Regular readers of this blog (both of you) will recall from one of my posts about my trip to Southern Africa in 2011 that the scenery there reminded me a lot of the video game Far Cry 2. Well, I can’t deny that one of its sequels – Far Cry 4 – heavily influenced my expectations of Nepal. Fair play to the developers, they certainly do their research well and successfully make their fictional countries very faithful duplications of the countries they are based on. The fact that this landscape met the expectations the game had set is probably what made me feel like I was finally there.

We reached Gorkha at 4pm. The driver asked which hotel I had booked a room at – I hadn’t. I did the booking through the Expedia app just as we were arriving in the city. The one I ended up picking was a budget hostel – very budget. So budget that the owner’s internet connection really struggled to refresh his email inbox in order to confirm that I had indeed booked a bed, even if just 10 minutes earlier. As I recall, I was the only one there.

To be fair, there’s really not that much to Gorkha, so there was no good reason to expect many other tourists. It’s most famous as the home province of the Gurkhas – the incredibly brave troops of the British Army (and the Nepali Army, of course), who are said to be both fiercely loyal and completely fearless. If a man tells you he does not fear death, the saying goes, he’s either lying or a Gurkha. That was enough to make me interested in breaking my journey to Pokhara, but apparently I’m the only one who bases their travel plans on the notoriety of infanteers.

I explored the extremely small city in pursuit of a post office. I found one but, despite it being World Post Day, it was closed because of Dashain. Virtually everything was – the main street was effectively deserted, with almost every shop shuttered. I wandered around some more, finding a small temple, some pretty good views out across the valley the city is above and some dinner.

The following day, we continued on our way to Pokhara. As previously, we stopped for a cup of tea and a snack along the 110-km road. As we set off so much earlier and didn’t have to contend with Kathmandu traffic, it took only about half the time, so we reached Pokhara at 9am.

In the final stretch, the first snow-capped mountains came into view. As far as I can recall, they were the first I’ve seen from ground level in my life. Even if that recollection is incorrect, the sight gave me a bit of a thrill.

I’m afraid that I’m going to leave my arrival in Pokhara for the next post, so you’re only getting the day of travelling in this one. I hope it at least gives you some of the background and thought processes behind this trip.