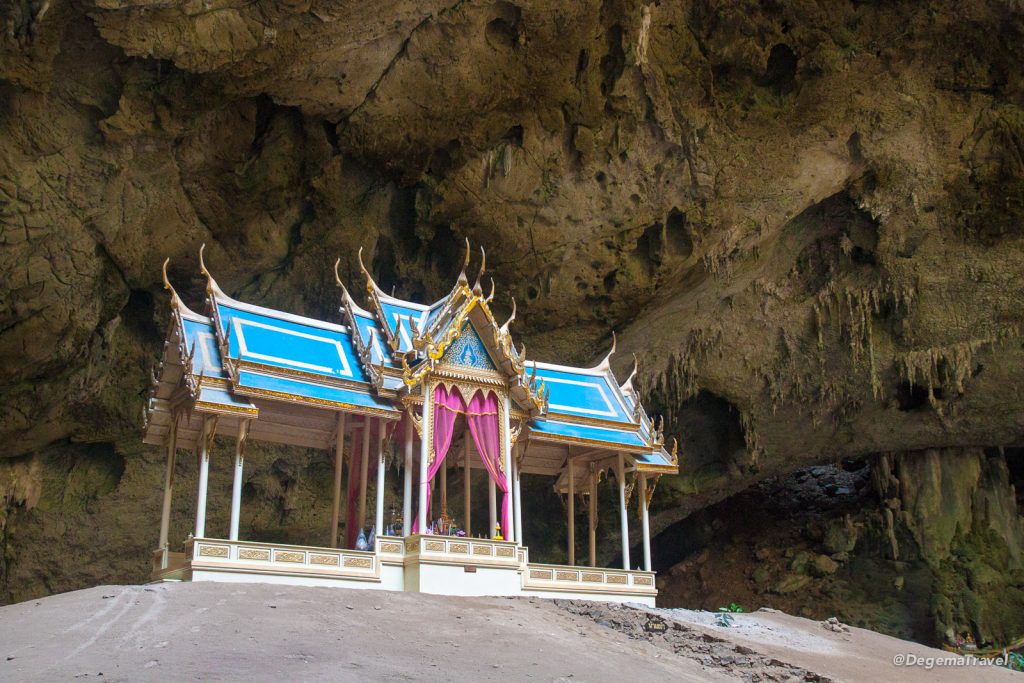 I am delighted to report that I have completed the first of my main objectives for this bout of Songkran travelling, though at quite a significant cost. I came dangerously close to suffering from sunstroke and my camera is now inoperable.

The day started at around 10am (because I’m not a morning person, by nature, and I love a good lie-in). I set out with the intention of renting a motorbike to drive to Khao Sam Roi Yot National Park. I was apprehensive about doing so, however. I don’t know the roads, the rental companies or the police and military checkpoints in the area and a quick check on Google Maps showed that the park is over an hour’s drive away from Hua Hin.

Within a handful of metres of the door of my hotel, a tuk tuk driver asked if I wanted a lift. On instinct, I declined. However, on looking at her vehicle, I noticed a sign listing tourist attractions and, out of curiosity, asked how much she would charge to take me to Khao Sam Roi Yot. She said 1,500 baht for a round trip, which I felt was actually pretty reasonable, so I agreed and jumped aboard.

After the aforementioned hour-long drive – made significantly more comfortable because it wasn’t me driving it – we arrived at Bang Po Beach. My driver – Preda Na Chanan, according to the information in her vehicle – took me to one of the buildings there, where a slightly brusk lady told me the tour options. I could choose any combination of three star attractions: the cave, the islands and the canal. I went for all three, at a price of 1,200 baht.

After buying a couple of bottles of water, a bottle of Coke and an ice cream (90 baht), I walked out to the long-tail boat which would be my transport for the day. There is no jetty or pier – you literally walk out across the muddy shore and wade through knee-deep water to jump onto the boat. At this point, I began to doubt the wisdom of having warn hiking boots.

I had the boat entirely to myself, which was quite helpful as it meant I could move around and take pictures at whatever angle I pleased, though the boat did noticeably pitch to whichever side I moved to. The quite elderly captain of the long-tail (also a woman – seems like it’s mostly women in the tourism industry around here) did not object to this, however, and we were soon on our way to “the canal”.

This was actually reasonably interesting. Basically, it was the narrow estuary of the river which comes out into the Gulf of Thailand in this cove. I’d glimpsed it as the tuk tuk crossed the bridge leading to the tours area, lined with elevated buildings and fishing boats of all shapes, sizes and vivid colours. While fascinating and picturesque, our visit was a brief one. We motored up to where the bridge was – a distance of about 1.1km from the mouth of the estuary – turned around and went back out to sea, getting a second look at the wading birds on the beach as we passed.

This, bluntly, was a disappointment. While I would certainly recommend that you do take this boat tour yourself, I would suggest sparing the few hundred baht they add to see the islands because, frankly, the four specs of land we went vaguely near were not that impressive. It was quite cool to pass right between the two smallest, but there are much more remarkable places to see islands like them in Thailand – particularly the Phi Phi Islands.

As we sailed from the islands towards “the cave” – Phraya Nakhon Cave, the whole point of this trip – we were joined by a flight of seabirds, which appeared to be common terns. They were following us because our passage through the water was kicking up some small fish, which they immediately swooped down on. In fact, some of these fish ended up jumping right inside the boat!

In case you’re not familiar with the expression which the title of this piece is referencing, it is a famous line from Noël Coward’s 1931 song, which says that “mad dogs and Englishmen go out in the midday sun,” implying that they are the only ones dumb enough to do so in hot climates. Sure enough, it was 1am when I waded ashore at the beach near Phraya Nakhon Cave.

It should be noted that there is a bench with a set of taps for you to wash your feet under so that you can put on your hiking shoes here. This is located on the extreme right of the tree line as you approach it from the sea. It needs noting because I didn’t see it until the return trip, when it was of absolutely no use to me. There was also a small restaurant and toilets in the shade of the trees.

Bypassing all of these, I rather foolishly went right for the hill up to the cave. Here, the boots absolutely justified themselves. While some people were wearing flip-flops and sandals to climb the 430m trail which nearby signs laughably described as “gradually sloping”, it would certainly not be my first choice.

So, with about three-quarters of a bottle of warm water, sand in my shoes and the sun glaring down during the hottest part of what was already an abnormally hot day (it was about 34°C), I made a start on the trail. It was quite a clear and relatively easy trail, with surprisingly even steps made of rocks rubbed smooth by countless footfalls.

I should mention that I suck at climbing hills; a result of hereditary weak knees. They wear me out in next to no time, leaving me to take long, humiliating rests while young children and elderly ladies spring up the path without even sweating. I got about two thirds of the way up, just past a very pleasant viewpoint, when I was genuinely concerned that I might collapse. I found a rock to lay on and must have stayed there for at least 30 minutes, if not a full hour.

I have always found that outdoor-type people are some of the most caring. Sure enough, two people gave me some of their water, which really helped a lot. With that and a long period of cooling down, I was able to recover enough to very carefully continue. So, my eternal thanks go out to the French guy (who said that he, too, had had some difficulties on the way up and was sort of passing on the kind act) and the Thai guy – neither of whose names I got.

I met the Thai guy again once I’d finally descended into the cave. We shook hands and posed for a couple of photos together. It is a photo I will treasure, simply because it shows the unlimited kindness you can sometimes receive from complete strangers. However, I will also be treasuring my pictures from the cave itself. For one thing, they may very well end up being the last that my Canon REBEL T1i ever takes.

The Phraya Nakhon Cave was named after the ruler who discovered it about 200 years ago when sheltering from a storm. In 1890, King Rama V ordered the construction of the Khuha Kharuehat Pavillion atop the central mound in the largest of the three limestone caverns which make up the cave. It made for quite a striking photograph, which the near-fatal climb made all the more significant. It was definitely worth the difficulty.

Sadly, on the way back down the hill, I saw a picture I wanted to take and switched on my camera. Nothing happened. I popped out the battery and reseated it, then it started continuously taking pictures, even when I switched it back off! I suspect that I had sweated so much that enough of it got into the camera, frying the electrics! Suffice it to say, I’m going to need a new camera body, though I’m ever-hopeful that it will dry off overnight and start working properly again. I am not totally distraught about this because I still have a spare (a Canon 400D) in Phuket.

The downhill trip was obviously much easier and I got back to the tuk tuk safely. The driver was a little peeved that what was meant to be a half-day tour ended up taking the full day, but she never demanded any more money – just kept repeating “full day!” This was the end of my full day, though. Despite the fact that loud music is blaring across the city, I have absolutely no energy left to go out and enjoy it.

I can confirm that what my friend, Rina, said yesterday about how Songkran starts on the night of the day before the official beginning of the festival (which is Wednesday 15th April 2016) is entirely true. I spotted a number of water-gun-totting people covered in white paste when I nipped out to grab a bite to eat earlier. Fortunately, it seemed to be confined to the tourist area behind the Hilton Hua Hin Resort & Spa and I managed to avoid getting soaked.

I also noticed a parade or protest of some kind – a long line of what appeared to be students in sports kits holding hands as they crossed a busy junction. I couldn’t understand what they were saying and I had no recording gear on me (and I hadn’t eaten all day), so I didn’t pursue it.