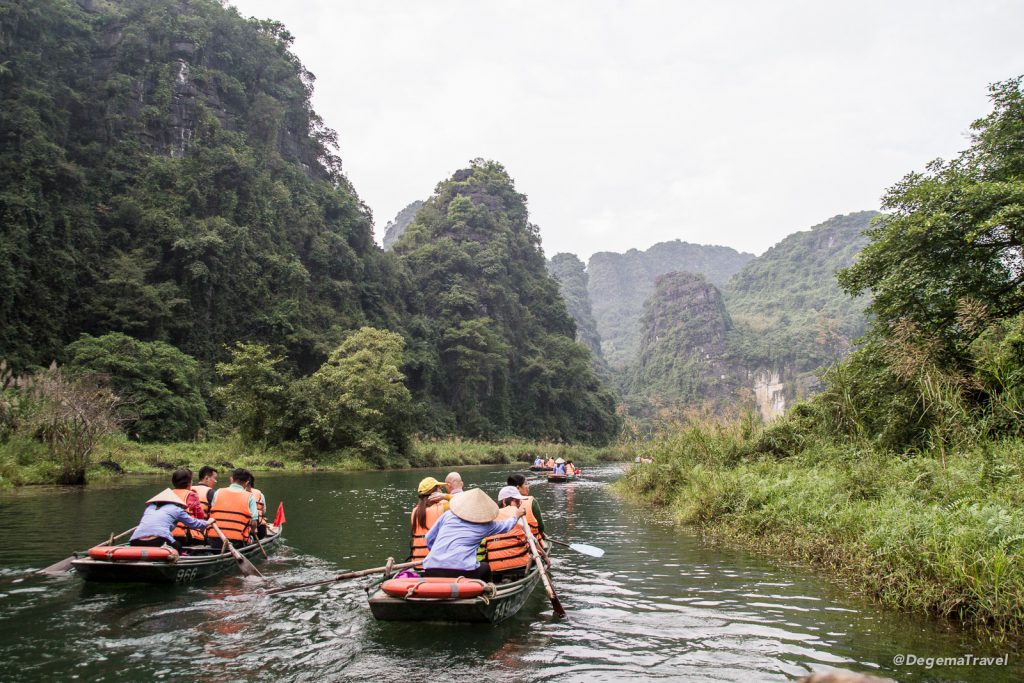 Playing the Tourist in Tam Coc

I arrived at Ninh Binh train station from Hanoi as the sun was dropping out of a hazy sky. I had the general intention that I wanted to rent a motorbike and find a homestay (the Vietnamese name for a hostel), but that’s about as far as my plan went.

I didn’t realise, at that point, just how little time I had available to achieve that meagre aim. The nightlife in the country’s capital was tame enough. In the countryside, all life basically ceases at nightfall!

Fortunately, my task was significantly simplified by the presence of touts directly outside the train station. I made my own life a little more challenging because I hate touts and have become accustomed to ignoring them. It was only when a woman approached and asked me a question instead of just shouting “you rent motorbike” at me that I finally actually listened to the offer.

This woman worked at a nearby restaurant and was willing to rent a motorbike for the price that my friend in Hanoi said it would cost – 100,000 dong per day. It wasn’t an especially good motorbike and it had next to no petrol in it, but it started ok, if you gave it a little encouragement. I drove off towards the homestay the woman had recommended, reminding myself that they drive on the right in Vietnam (not the left, like in Thailand and the UK). I turned right at the first junction I came to and immediately started heading down the wrong side of the road.

It was going to be an interesting few days…

Now properly night time, and having taken at least one wrong turn along the way, I got to the Tam Coc Riverside Homestay. It’s quite an optimistic name, given that the nearest river is half a kilometre away, as the crow flies. I was happy enough with the rate of $5 per night for a rather hard bed in a mixed dorm, anyway.

The owner had kindly given me the lowdown on the local attractions and, during the night, I’d picked out the ones that seemed interesting to me. I headed out into a faintly drizzly Sunday morning, aiming for Hang Múa Viewpoint. I somehow managed to take yet another wrong turn along the way, driving most of the way down a rough dirt track before realising that it was basically someone driveway and turning back. As I returned to the road, I was slightly relieved to find that a couple of Canadian cyclists had made the same mistake as me, and I pointed them in the right direction.

My visit to Hang Múa didn’t start well, as I had to pay 10,000 dong just to park my motorbike and a further 100,000 dong to enter. Realistically, that’s extremely little money. However, I hadn’t fully formed an impression of the value of the local currency yet, so it seemed like quite a lot. My sense of having been ripped off worsened as I walked along the path to the bottom of the staircase up to the viewpoint, past the sort of tacky displays you see in the worst kind of tourist traps. There was a nice waterfall along the way, though.

I’ll be honest – I’m not great with stairs. They tend to exhaust me extremely quickly. Along flat ground, I can keep going for miles, but stick even a slight incline in my way and I’m soon puffing like a steam engine and sweating like a horse. However, I’d paid 100,000 dong and I’d be damned if I was going to walk away without seeing the view.

I got about halfway up before stopping for a bit of a rest. This allowed a gaggle of middle-aged Vietnamese ladies I’d passed near the entrance to catch up. By coincidence, I kept pace with them most of the rest of the way up and, as they stopped to take photos, I stopped to rest some more. Eventually, they asked if I’d mind taking a photo for them so all four of them could be in the shot – I happily obliged. I then asked if I could take a shot with my own camera, purely so that I could illustrate this story here in my blog. They obliged in turn.

This kicked off a conversation about who I was, where I was from, how long I’d be in Vietnam and so on. I was very happy to chat, as any solo traveller is, and soon learnt that the ladies all worked in the accounting department of Vietnam Airlines. This chat snowballed into me taking even more photos of and for them as we continued our climb to the top of one of the two peaks at Hang Múa – the one with a little pagoda on top, which was being used as a backdrop by a surprisingly well-equipped fashion shoot.

Finally, as we were making our way back down the hill, the ladies asked if I wanted to join their tour group. It turns out they’d taken a detour from the planned itinerary because they had already seen the place they were meant to visit first and wanted to see something different. They were going to rejoin the group for lunch before setting off for Trang An – an area which was marked as a highlight in my own plan. They were nice and friendly folks and I was very happy to agree to stick with them for the rest of the day.

Lunch was…unremarkable – standard tour group fare. What followed was anything but standard. Trang An is a beautiful spot, somewhat reminiscent of Phang Nga Bay, but inland instead of at sea. The analogy was certainly helped by the fact that we were paddled around the place in a canoe. Describing the scenery is beyond my capabilities, so take a look at the photos and judge for yourself.

An unfortunate side effect of my career as a photographer, journalist and blogger is that, on seeing these kinds of sights, my mind tends to get ahead of itself. I start to think about how exactly I’m going to phrase things in my later write-up, instead of just enjoying the experience. I caught myself doing it, this time, and decided to try something different.

As soon as I felt my thoughts galloping off, I’d say “om” in my mind. Up to this point in my life, I’d never seriously considered the prospect of meditating. However, using that simple mantra, my mind instantly snapped back to the present. Details and colours in the mountainous terrain seemed to pop out of the scenery and I felt, for the excruciating want of a better term, present in the moment. It was an incredible sensation, which sent shivers through me.

A further comparison between Trang An and Phang Nga Bay is that both have been used as movie sets. The latter famously starred in two James Bond films while the former played a titular role in the 2017 movie Kong: Skull Island. I’m not a massive film buff, so this fact didn’t particularly impress me, though it did seem to impress my companions.

This amazing day galloped to a rather lacklustre conclusion. Once we’d been canoed back to the start point of the tour, I bid a hurried farewell to the lovely ladies I’d spent the day with, exchanging Facebook friend requests before jumping on a motorbike taxi back to Hang Múa to recover my motorbike. I arrived back at my homestay just as night was falling. As I noted in my journal evening, while recording my experiences: “I’m still kind of astounded that I’ve only been in this country for just over two complete days. So much amazing stuff has happened in that time that I’m starting to worry about how the hell I’m going to write it all up in my blog! Each day will have to be a two-parter!”

Given that it’s already mid-February and I’ve only written about two days of an 11-day trip, that’s an extremely prophetic insight!