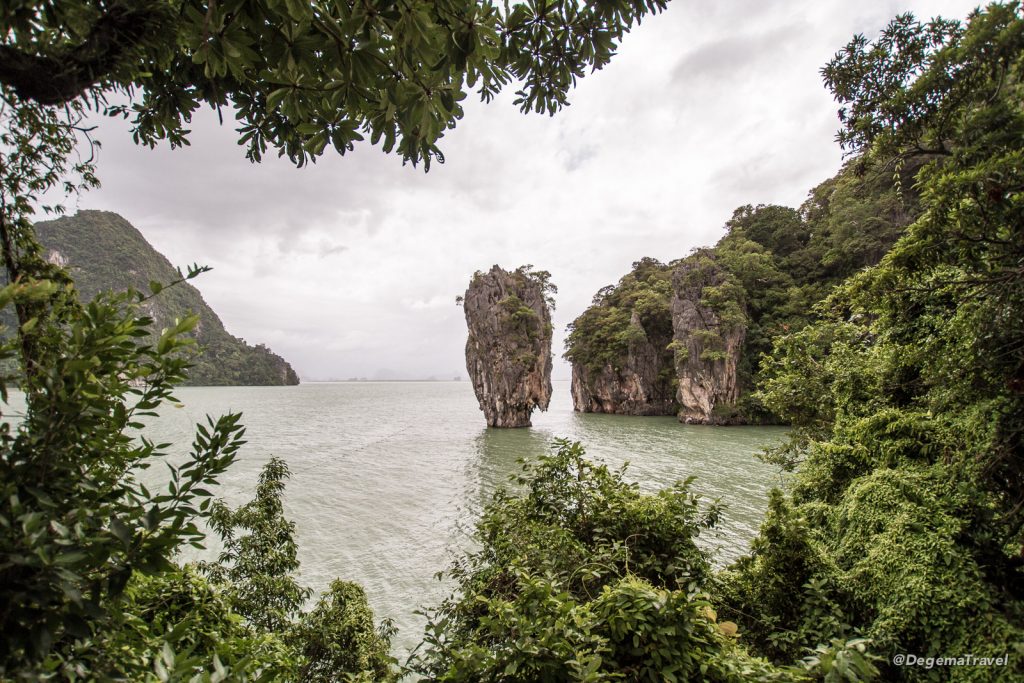 Playing the Tourist in Phuket – Part 2

My weekend of looking at Phuket through the eyes of a tourist, instead of an expat, continued with a trip to one of the most famous and impressive parts of Thailand – Phang Nga Bay. This has been on my bucket list for much of the four years I’ve lived in Phuket for yet, just like the Big Buddha, it has taken me the better part of all four of those years to get around to it. If it’s always going to be there, what’s the rush?

Except it isn’t always going to be there. Eventually I’ll move away from Phuket and end up missing out. That was my concern which, fortunately, my birthday weekend with Malinda put an end to.

Phang Nga Bay justly deserves its renown. The limestone pillars and islets towering out of the emerald water are really striking. The area is sometimes likened to Vietnam’s Ha Long Bay, to the extend that it was actually used to shoot the parts of the 1997 James Bond movie Tomorrow Never Dies that are set in Vietnam. It was also, more famously, part of the setting for the 1974 movie The Man with the Golden Gun.

I arranged a tour of the bay through my friend Jiew at Traveliss.com. I had previously been on a speedboat tour of the area…about 15 years ago, when I visited Phuket as a child with my father and brother. This time, I wanted the more immersive (and cheaper) cruise, which includes kayaking around some of the larger islands.

The tour also included collection from my apartment by minivan, which happened quite early in the morning. However, after a long and very heavy night’s sleep, both Malinda and I were ready to roll mostly on time (the bus was slightly ahead of schedule, which caught us off-guard). We had a couple of bizarre stops on the way, which we’d thought were to allow us to pick up more passengers, but could have just been smoke breaks for the driver. However, we made it to the pier and boarded the boat in good time.

Sadly, of the three days of this long weekend, Sunday 12th August brought the worst weather. It was overcast all of the time and rained quite heavily at a couple of points, though we got extremely lucky with the timing of these downpours. To be fair, it’s the middle of the rainy season here, so that was always going to be a risk. Despite this being Malinda’s first experience of the place, she remained amazingly chipper about it, not allowing the weather to disrupt her enjoyment of it. She’s just that kind of person.

With a briefing from the quite entertaining guide, we puttered along through the islets to our first port of call – to so-called James Bond Island. As I mentioned above, Phang Nga Bay was the setting of The Man with the Golden Gun, and the island of Koh Khao Phing Kan played the part of Francisco Scaramanga’s hideout (spoiler warning). Somehow, over 40 years after the movie was released, the island still attracts visitors, to a frankly excessive degree.

We had to board a smaller boat to actually dock at the island. There, we walked around and took photos for a bit. There’s nothing much else to do, other than buy overpriced trinkets from the group of stalls on what you could optimistically call “the beach”. The iconic image is that of Koh Tapu, which means ‘Nail Island’ in Thai. It takes its name from the construction implement, which the pillar is shaped rather like.

Finally, our time exhausted, we returned for a lengthy wait by the dock. We watched the small boats struggle in the powerful waves, occasionally knocking over and breaking the old wooden piles used to protect the boats from the hard edges of the concrete dock. Finally, our boat arrived and took up back to the main tour boat. Just as we boarded, the heavens opened and it rained really hard.

Just, as the rain eased off, we arrived at Koh Hong. Hong is the Thai word for ‘room’, and the island takes its name from the fact that tightly grouped islets, caves and rock formations create little rooms that you can explore from a kayak. I was still concerned about the weather, so didn’t take my own camera onto the kayak, instead relying on Malinda’s phone, which was in a waterproof case.

The island itself was interesting, and our friendly guide (who also did all of the paddling), pointed out various interesting formations. The guides must get pretty bored going around the same islands every day and, as a result, they’ve given names to loads of rock formations that vaguely resemble anything from a turtle’s head to an upside-down chicken.

Our exploration of Hong Island was interesting and fun, but perhaps a little short. There maybe wasn’t much more to see, but I noticed other kayaks paddling off to parts we never reached. It was pretty crowded, to be fair, which actually created some congestion in one or two places, especially the dead-end cave we briefly went into. As we returned to the boat, the rain started once more. However, this was also lunchtime, so we had a bit of a distraction. The food – mostly simple Thai dishes – was really very good, for a buffet.

Our final stop was Koh Panak, where we again boarded the kayaks. This time, I’m very glad that I did take my camera because the experience here was amazing. We arrived barely minutes before the tide was low enough for us to enter the cave that would take us through to the isolated lagoon at the heart of the island. We were the second boat in, and the water was still so high that we had to lie flat in the boat with the top of the boat scraping the roof of the cave, despite some of the air having been let out of it. I even laid my head to one side to make sure my nose didn’t hit any stalactites.

I only discovered afterwards that Malinda isn’t massively keen on confined spaces.

As we emerged into the lagoon, the sun also emerged from behind the cloud cover, lighting up the tree-covered vertical walls. Honestly, this part of the trip really made my day, and it’s virtually impossible to explain why with words, so here are some pictures instead:

We returned to the boat once more and made one final stop, still around Koh Panak. This time, we were in a small cove where the boat anchored and we were given a bit of time to do whatever we wanted. Some took the kayaks out to paddle around, many others jumped off the boat’s upper deck and into the cool, green water, including both Malinda and me. It was nice to have a chance to cool off and relax for a bit.

During this period, there was a weird spectacle that I got front-row seats for. A girl was paddling a kayak back towards the boat when a group of guys accosted her and they chatted for a bit. The guys then approach the kayak, flipped it and boarded it, leaving the girl to swim back to the boat. If they were going for a flirtatious approach, I think they kind of failed at the final hurdle. Possibly they just really wanted to be in that kayak…

Finally, we sailed back to Klong Khien Pier, where we boarded the minivan to head back to Phuket. That wasn’t the end of the day, but it is the end of this part. The story will continue soon.