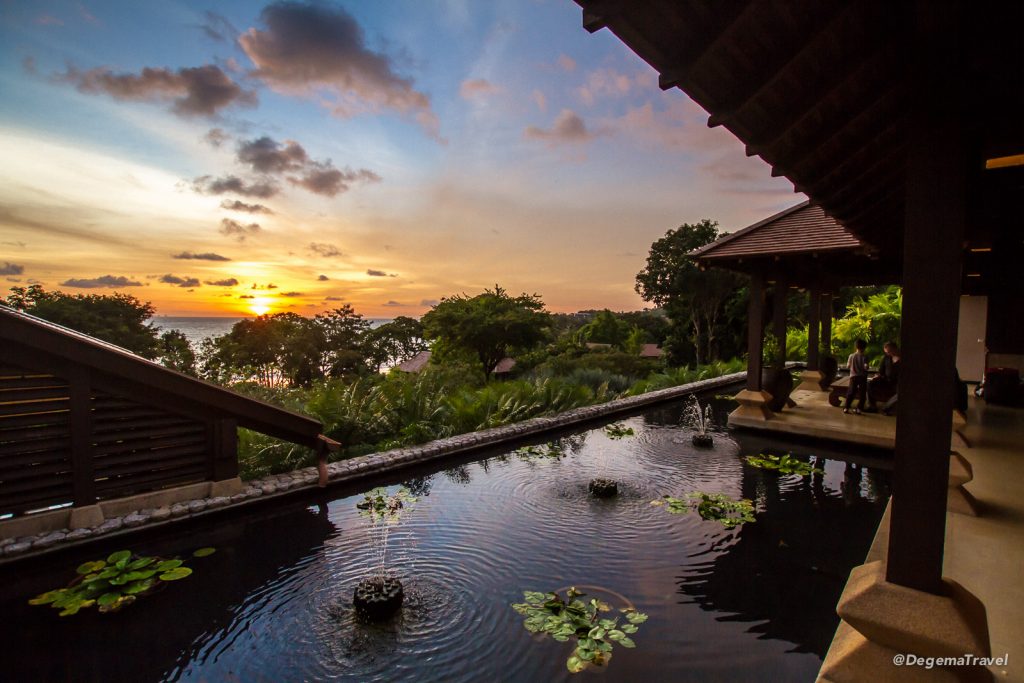 Recommend: The surf and turf buffet at Rak Talay.
Avoid: Getting a room at the top of the hill.

Reviewed on 23rd October 2017. Details may become inaccurate over time.

Over the last weekend – a long one, thanks to a national holiday on Monday – I had a little getaway with my girlfriend; an unrivalled opportunity to relax and unwind. It was an opportunity to explore a tropical island destination in Thailand which is slowly growing in popularity, and enjoy the hospitality of what is, at the moment, the only five-star hotel there: Pimalai Resort & Spa on Koh Lanta. Such are the perks of working in the travel industry!

Pimalai Resort & Spa is set on a hillside. That’s the important thing you need to take away from this section. Yes, it’s an extremely picturesque part of an extremely picturesque Thai island, but it is still a hill, and it’s a pretty steep one. For some reason, we got put in the room as high up that hill as it is possible to get, with the beach, pool and restaurants right at the bottom of that hill. Whatever you do, don’t accidentally leave the sun cream in your room when you go down to do some sunbathing.

The hillside location does have its upsides, too. This was no more evident that when we first arrived at the resort, after three hours of driving from Phuket to Krabi Airport, about 40 minutes waiting around there for the complimentary transfer, an hour’s drive to Pimalai’s private pier, a 30-minute boat ride to the Koh Lanta Old Town Pier and, finally, a further 30 minutes in a minibus, driving to the other side of Koh Lanta, and Bakantiang Beach. As we were being checked in, we were treated to a glorious sunset from the high elevation of the very pleasant reception area. Words cannot do it justice, so a photo will have to do it.

The beach itself, right at the bottom of that oft-cursed hill, is a fine one – the sand is clean and soft, though it is a sort of beige in colour. The sea that laps at it is warm and clear. I’ve heard Koh Lanta described as “what Phuket was like about 20 or 30 years ago,” in terms of how ‘developed’ it is, as well as how clean. It’s more developed than Koh Phayam, though I couldn’t call it less clean for it. If you’re looking for a proper paradise, but without having to suffer the full Robinson Crusoe experience, this is the island for you.

I said that we had been put in the room highest up the hill, which is actually not entirely true. Our room – 201 – was the highest of the Deluxe class of rooms, but there was an entire additional area of hotel – the resort’s so-called Villa Estate – featuring the second swimming pool and two restaurants, among other facilities. On the beach side of a small, quiet road, what you might call the standard rooms are separated into tiny villages, consisting of two or three buildings each, with each building housing on a few rooms. This design means that even the deluxe rooms are fairly quiet and private.

For once, the naming convention actually makes a certain amount of sense. Even the Deluxe rooms are luxurious, boasting a supremely soft king-size bed, an impressive widescreen TV with a good package of satellite channels, a fan-cool balcony and an awesome bathroom, separated from the sleeping area by a sliding screen.

It perhaps seems odd to be that impressed by a bathroom, but this one was a considerable size, taking up easily a third of the room’s 48 square metres, and featuring a rainfall shower, pretty good toiletries and a deep-soak bathtub long enough for me to sit up in without having the bend my knees (for reference, I’m 193 cm tall in total). Unfortunately, as is fairly common with hotel bathrooms, the toiletries did not include bubble bath, so I made-do by using the body wash for the same purpose.

Having checked in to our room, my girlfriend and I headed down to Pimalai Resort & Spa’s beachfront eatery: Rak Talay Beach Bar & Restaurant. There, with a glass of wine apiece, we enjoyed the outstanding surf and turf buffet. My girlfriend, being a chef, was a little tougher to impress than I am, and felt that the food did not quite justify the not-inconsiderable cost (for two buffets, two wines and a bottle of water, THB 4,929.28). Even she agreed that the ham was exceptional, the sushi was remarkable and the little potted starters were very good, especially the tuna and avocado one. I found the barbecue to be very good, especially the lamb, but I thought the desserts were a little over-sweet.

While the food was fantastic, the setting really takes some beating. While not technically on the beach, our feet were in the sand on the slightly elevated beachfront. The best seating was in a selection of cabanas facing the sea and, unsurprisingly, they were all taken by the time we got there. We still enjoyed a romantic table for two, serenaded by a trio of live musicians playing popular classic songs.

The next morning – and every morning – we went to Spice n’ Rice Thai Restaurant for the breakfast buffet. This, too, was exceptional in quality. Surprisingly, the fried breakfast included pork sausage, while most hotels offer only chicken ones. Other high-quality offerings included cold cuts, cereals, freshly cooked eggs, pancakes, pastries, salad, fruits, cheeses, rice and more. It was definitely a tasty way to start each day!

Pimalai Resort & Spa has two other restaurants in the Villa Estate – The Seven Seas Restaurant & Bar and The Banyan Tree Poolside Café – but we did not try either of these. As we were there to relax and were spending a not-inconsiderable amount of time in our room, we did try the room service. For THB 1,365.32, we had a very good pizza, a generous serving of Spaghetti Bolognese and a Greek salad, all of which were excellent and arrived at our room nice and hot – quite a feat for room service.

There’s not much to say, in this regard – the service was fantastic throughout. One especially fine example was by the swimming pool, where we were given a glass of ice-water each which was kept constantly filled throughout the hours we were there. As the waiter came around to fill the glasses, at one point, he recognised the couple on the sun loungers next to us and chatted with them a while. That kind of personal touch and friendliness was evident throughout our stay at Pimalai Resort & Spa.

I have been listing the name of the hotel fully as “Pimalai Resort & Spa” and, indeed, the place has a spa. It is one which an excellent Thai travel Instagrammer named Angie Thien (@angiethien) recommended that I should try out, but I unfortunately did not get the opportunity to do so. For what it’s worth, her opinion is that it is a “must-try”.

The other facilities available include an extensive sports facility with tennis courts and two swimming pools. As I said above, we spent some time by the lower of the two, which had a covered baby pool at one end and a large covered Jacuzzi at the other. We watched someone getting a diving lesson, but the water was only 1.25 metres at its deepest, so comfortable to swim in without needing scuba gear! Down on the beach, there’s a selection of water sports gear available for use, including kayaks and bodyboards.

Pimalai Resort & Spa fully deserves every one of its five stars. While I’ve been a little sour about having to climb the hill, this is the tiniest of tiny objections in what was otherwise a blissful, relaxing and romantic weekend away.

The prices for pretty much everything are a little higher than I would usually be comfortable with, but then this sort of hotel is normally beyond my price range. I was fortunate enough to get the room for free, through work. Regardless, the prices are fully justified by the quality of everything, including the rooms, service, food and setting. I had a thoroughly enjoyable stay and would heartily recommend the resort.

As stated above, I stayed at Pimalai Resort & Spa for free, though I did have to pay for my meals. The booking was listed as an “incentive room”, so it is possible that the staff may have gone to extra effort to impress me. However, it is important to note that the room was provided through my employers, not directly from the hotel, and only as a gift at the last new-year’s party. I was placed under no obligation to even review the hotel, let alone do so favourably.