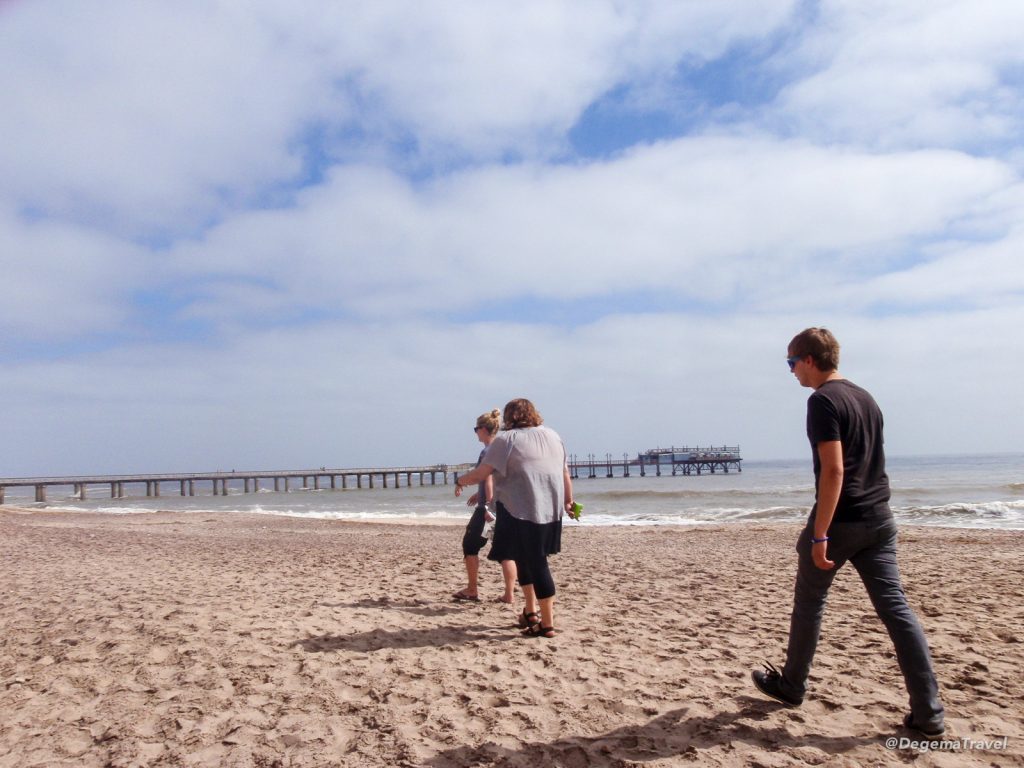 Sleeping on top of a rock in the middle of nowhere was quite the experience. The stars glittered above the five of us who had chosen to make that outstanding spot our bed for the evening. The morning after was also quite an experience, though not really for the same reason.

I stirred from my punch and Sambuca-induced unconsciousness once in the night and had just enough awareness to think ‘where are the stars?’ before going back to sleep. The answer, it transpired, was ‘behind the cloud’. At some point, the weather had turned and, despite having been assured it would be clear all night, we awoke with a thick layer of dew dampening out sleeping bags.

I actually woke up with even more liquid on me than that. At some point in the night, I’d had a nosebleed. I descended from Mt Bedroom with five sleeping mats draped over my arms and a trail of blood down my cheek, in dire need of a shower and a change of clothes.

After a short drive, we arrived in Swakopmund, and I enjoyed a very refreshing shower. Tom, Emma, Emily and I went for a fast-food lunch and a wander around the city. Undoubtedly a result of colonial influences, it looks a little like a novelty German theme park, with classically Renaissance-style architecture throughout. My confusion and discomfort about how the place looks probably explain why I took next to no photos of it.

While we were having a rest from the road, Helena needed a rest, too. According to Gino, the starter button was playing up, which explains why he and Jase had been bump-starting her in reverse. The air brakes also needed some attention, especially since Gino had been smacking them with a hammer at 8am because he’d parked on an incline and the brakes had locked on.

Our wander around the city of Swakopmund revealed that the word “city” is perhaps a little generous. It basically boils down to nine blocks arranged in a grid, with a bunch of outdoors shops and mechanics specialising in off-roaders. It almost seemed like the city only existed to serve overlanders.

We stocked up on snacks from Pick ‘n’ Pay and, after a substantial amount of rest, we headed out for an outstanding seafood dinner at Ocean Basket.

Jase didn’t join us for dinner – he went off to eat on his own. The reason given was a fair one, though. He wanted to avoid a pair of nutters from a previous trip that he’d spotted in town. They were an elderly married couple, the husband of whom invented Malarone, the anti-malarial medicine I was taking. The wife, so Jase said, was the real nutter. I can believe it because we saw the couple knocking at his door three or four times. He succeeded in avoiding them, in spite of their best efforts.

And that was it – a very quiet day, all told. After dinner, we went back to our rest camp, played some card games, drank some more and called it a day. We were in Swakopmund for a couple more fairly uneventful days, which I’ll summarise in the next post.