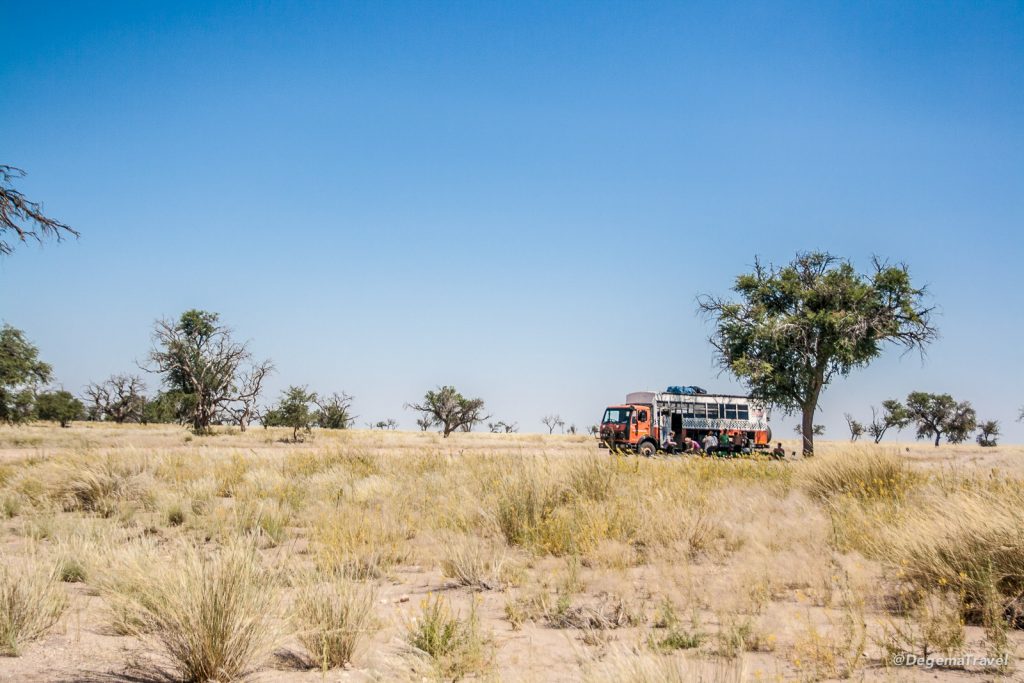 Ordinarily, I’m not a morning person. At least, I wasn’t in 2011. The only four o’clock that I knew of was the time when any right-thinking Englishman would get a brew on for afternoon tea. However, in spite of my thinking that the hour was purely one of myth and legend, we arose at 4am and departed from the campsite in Sesriem in the dark.

A little time later, as the sky was starting to glow from the early morning rays eking over the horizon, we reached Dune 45. Its odd name comes from the rather prosaic fact that it’s located by Kilometre 45 on the road between Sesriem and Sossusvlei. However, standing at about 170 metres in height and believed to be made up of five-million-year-old sand, it undoubtedly stands out from the surrounding desert.

As well as being ‘not a morning person’, the version of me that stood at the base of this colossal sand dune was also really not a hills sort of a person. I burn out too quickly and end up winded and exhausted. Hiking in Oman had improved my endurance a little, but certainly not enough for a long, steep climb up loose sand. I tried to stick to the footprints of the people who had marched on ahead, seemingly unphased by the incline, on the basis that they would have compacted the sand a little, giving me a better footing. It didn’t help and, while the majority of my travelling companions took a seat at the highest extent of Dune 45, I sat a good 50 metres or more back along the track, thoroughly demoralised. A mere 50 metres may not seem much to you, dear reader, but it seemed more like 50 miles to me.

The rising sun somewhat changed my mood. As the sky blended seamlessly from black to green to orange to blue, the sheer scale of the landscape that was gradually being illuminated before me gave me a sense of perspective. It was one of few occasions when I’ve been able to see that it is not the sun that is rising, but the Earth that is revolving, exposing previously shaded areas to the stationary star.

Then I got bored and ran down the near-vertical front slope of the dune. It’s kind of amazing I didn’t trip and injure myself.

We had breakfast at the base of the dune before setting off towards Swakopmund – one of Namibia’s larger and more important cities. The countryside we drive through was staggering, particularly for how much it reminded me of the video game Far Cry 2. Granted, the game is set in a fictional Africa country, so the similarity shouldn’t be that surprising, but the landscape in the sandbox game had always seemed somehow unbelievable to me; like it was larger than life. And yet, here it was, gliding past the window.

Along the way, I started to properly get to know my travelling companions – especially Jase, one of the tour leaders. He was officially designated the driver/mechanic since Gino was the tour leader. While they shared the driving role, Jase was the only one I saw working on the engine.

By the time I met him, he was already 40, but certainly didn’t look or act like it. His body was toned and muscular in the sort of way you don’t get in a gym but from a life of heavy-lifting. He had a few tattoos, including a Buddhist mantra across his back and the words “Your Name…” on his left buttock. That tells you a lot about his sense of fun and humour – that he would permanently mark his body just so that he could accurately say to people: “I’ve got your name tattooed on my arse”.

By April 2011, he’d lived on the road for 22 years. As he phrased it: “I went travelling when I was 18 and just never went home.” In that time, he’d been cabin crew for Virgin Atlantic, a host for Club 18-30 and worked for Dragoman for a hell of a long time. If memory serves, he claimed to be the longest-serving employee in the company, with experience on every single trip they sold. He’d done all sorts of stuff in between. He mentioned that he’d been in the military, at one point – probably a reservist, based on what he said, but spent some time with the British Army in Germany.

With all his remarkable experience and wisdom, he was a truly remarkable man. I genuinely feel that my life is richer for having met him.

Pissing in the wind

We didn’t make it all the way to Swakopmund on that day. After a lot of driving, we pulled up at an outcrop of silicate rock in the middle of an otherwise featureless plain. Well, almost featureless – just a dirt road and some really weird electricity pylons that looked like they’d been erected upside-down. They were balanced on a point and held up with steel cables. It seemed like a really impractical way of doing things, but I don’t know enough about architecture to say if that’s true.

There was a small hollow in the shaded side of the rock – not deep enough to be called a cave – where a few stone tables had been set up. In the shade of the rock, we made out encampment and there followed what might be one of the most glorious evenings of my life.

It started, as any great night does, with yoga. Yes, that was definitely sarcasm. I can’t remember how that got started, but almost our entire group went for it in a big way. From there, Jase and Gino showed off their juggling skills, which got progressively worse as more and more booze was consumed. We kicked a football about for a bit and made some pretty convincing attempts to decapitate each other with a frisbee. As the sun went down, we made a fire and pretty potent punch.

With considerable quantities of said punch consumed, I attempted to show Emily how to jive – it being virtually the only form of dancing that I know how to do – and we had some particularly deep and meaningful discussions while she was, for some reason, sat on my knee. Other scraps of drink-hazed memory include various members of our group dancing on the stone tables and two or three of us virtually dragging one especially drunk person up onto the top of the rock, where we’d set up our beds. It being a clear night, we’d decided to forgo the tents and sleep under the stars. Even with the punch, that was a memorable experience.

At various points through the night before then, I needed to answer the call of nature. Lacking any alternative facilities, the only solution was to walk for about 20 metres away from the camp into the scrub that surrounded us to the horizon in every direction. As I was…communing with nature, I looked up into a crisp, clear, starry night. And I started to laugh. There was nothing especially funny up in the sky, I wasn’t being tickled by nature. It was just raw joy.