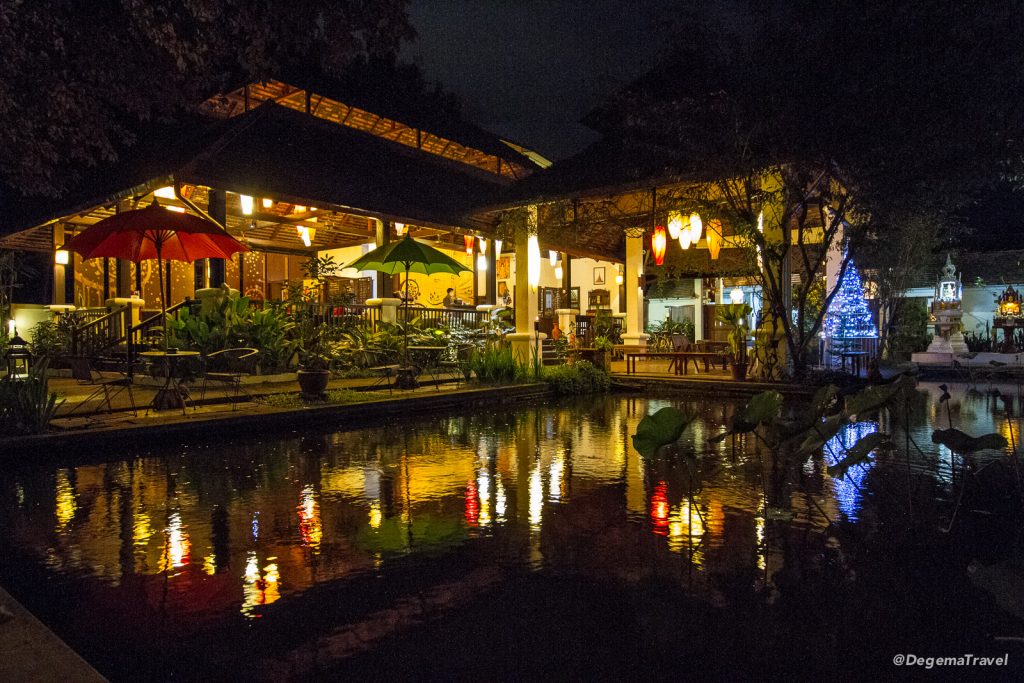 Recommend: Relaxing on the huge balcony.
Avoid: Stubbing your toe while trying to find the light switch.

Reviewed on 17th December 2016. Details may become inaccurate over time.

I took a quick two-night trip up to Chiang Mai last week – and yes, the ability to say that is pretty awesome, and one of the better perks of an expat life. It was for a photography workshop, which was a lot of fun and I will probably write about some time soon. One of the two nights was spent in the Lanna Dusita Boutique Resort (by Andacura Hotels & Resorts), which is what I’m going to be writing about now. So, without further ado…

The Lanna Dusita has a lovely rural setting, right on the western bank of the Ping River, which passes through Chiang Mai just the the east of the Old City. Of course, “rural setting” is kind of a nice way of saying “it’s quite a long way from the city centre”, but it actually works to the place’s advantage, in this case. It’s the sort of resort where being far from the bustle of the Old City is practically its best selling point! Additionally, it is only about 5 km from the city – maybe a little far to walk, but you can rent a bicycle from the hotel or it’s only a 10-minute drive, which you can easily arrange with the tours desk or the concierge.

The resort is nicely self-contained, being behind an imposing frontage and surrounded by walls, which creates a nice sense of exclusivity. The fact that it opens onto the river at the back, with a lovely and open view across the calm water, means that the walls don’t also create a sense of being hemmed in. The resort is well-designed to maximise the amount of rooms without feeling cramped, if that makes sense…basically, they hit the sweet spot of design, where it is compact without being what you’d think of as ‘small’.

The one downside to the location is that you are under the flightpath of commercial aircraft heading north out of Chiang Mai International Airport (CNX). However, with the airport being practically right in the middle of town (slightly to the west of the centre, if you want to be pedantic), there’s virtually nowhere in Chiang Mai you can go which isn’t under the flightpath and, by the time they get over Lanna Dusita, the aircraft are high enough that you can hear them, but the noise isn’t rattling your teeth as it can if you’re staying in town.

It should be noted that the hotel is also directly over the road from the local fire station, which may occasionally make a little noise. It didn’t while I was there, and I don’t suppose it would be anywhere near as frequently noisy as the jets, but it would probably make you jump if there was an emergency.

The half-dozen two-storey structures where you will find the rooms all have a lovely old-fashioned design, with lots of stained wood on show. However, the rooms themselves are surprisingly modern-looking on the inside, as well as being fantastically spacious and pretty comfortable.

Lanna Duita Boutique Hotel has three room classes which, as seems to always be the case, have mostly baffling names:

I was in a Superior Room and, with 28 sq m of floorspace and a king-size bed (which must have been designed for a king of the dimensions of Henry VIII, because it was massive!), it felt like the daft naming convention might actually be accurate, for once. I was also very impressed with the comfy chairs. This may seem silly, but I find a lot of hotels get this wrong and provide chairs which are very far from comfortable. These ones were a delight to sit in.

The in-room amenities were perhaps on the plain side, but certainly adequate. You get an old CRT TV with a fairly basic channels package, the obligatory tea and coffee making facilities and an en-suite bathroom with toiletries. Nothing particularly astounding, but far from being actually bad. The shower, in fact, was fantastic. I was initially a little down on it because it is quite a modern white PVC thing in a bathroom which is otherwise pleasantly rustic. However, it uses two taps to control the temperature. While it took me a minute or two to figure out which was hot and which was cold, I was able to easily and precisely control the heat once I had. Many hotels favour the single dial control, for which you need the patience and dexterity of a safe-breaker to find the sweet spot. This, by contrast, was one of the most enjoyable showers I’ve had in years.

The really fantastic part of each room is the balcony. At 10 sq m, it is almost bigger than some hotel rooms in the world! It is home to a comfortable chair, clothes drying racks and a padded seat along the front edge, making it quite a pleasant place to chill out. However, I couldn’t find the light switch, which made it also quite a dark place, in the evening. I’m pretty sure there is a light somewhere, but an exhaustive search failed to reveal a switch. It is worth mentioning that the set-up of light switches around the room is a little odd, to the extent that it is impossible to turn on the lights around the bed from the door.

Unfortunately, I arrived at the hotel pretty late and had to leave pretty early the next morning, so I didn’t actually get a chance to dine at the hotel. I can therefore only give you my impressions of what I saw, which were very good. The Lanna Dusita’s main restaurant has seating with a beautiful view right over the river. Named Wai Restuarant, after the prayer-like gesture used as a formal greeting in Thailand, they serve predominantly Thai cuisine, with some local specialties.

There is also a small coffee and snack bar by the pool, named Hohm Dee (I’m not totally sure what that translates as). It boasts an interesting selection of special local teas and hilltribe coffees, alongside a collection of classic hot beverages, soft drinks, pastries and cakes.

As the weather wasn’t that great while I was there, the breakfast was being served in the rather lovely lobby building, at the front of Lanna Dusita and well away from the river. I was told that it would normally be down by the river, allowing you to enjoy your food with the fantastic view. I had a quick peek in the dishes and found that it was pretty normal hotel breakfast fare, with a couple of local additions.

It should be noted that, because of Lanna Dusita’s fairly remote location, you are a little limited in dining alternatives. There are one or two little local restaurants within a short walk. Fortunately, it would appear that you have two of the best (in the immediate area) on site.

Despite such a short stay in the Lanna Dusita Boutique Resort, I saw no shortage of examples of the outstanding service they provide. The guys on the 24-hour reception desk were especially friendly, helpful and welcoming (and the welcome drink they provided was really tasty!). While I was taking a wander around the resort in the morning, everyone said hello or wished me a good morning. It’s a very simple gesture, but a very much appreciated one. I have always found Chiang Mai to be one of the friendliest parts of Thailand and Lanna Dusita demonstrated that better than most. At the same time, said staff were assiduous about their duties. The whole place was very clean and tidy.

As I said earlier, the Lanna Dusita Boutique Resort is well designed, making optimum use of a modest amount of space. This includes an impressively large swimming pool, not far from the river, with an adjacent sundeck. Massages are available and there is a tours desk at reception.

On the downside, the hotel does not have an on-site bar, but that seems to be the nature of this rural area of Chiang Mai. Indeed, the whole city is not what you’d call famous for its nightlife. Even so, it would be nice to have the chance to enjoy a couple of drinks by the river in the evening.

Lanna Duista Boutique Resort is one of those wonderful ‘get away from it all’ places, which are increasingly challenging to find in the mid-range price bracket. I’ve used the word “sweet spot” a couple of times above, and that perfectly describes the whole resort – it is away from the town, but not remote; it is compact, but not small; it is affordable, but not cheap; it is simple, but not uncomfortable.

The resort’s location is probably its biggest asset. The pool, sundeck, restaurant and even several of the deluxe rooms overlooking the gentle river, creating the sort of countryside scene for which the word “charming” was invented. Charm just drips out of every surface, from the beautiful lobby and its nearby fishpond to the river-side dining deck. The rentable bicycles near the entrance even have a charm of their own, and the thought of cycling along the riverbank into town makes me wish I’d had the chance to stay there longer.

When talking about the service, I said that Lanna Dusita demonstrates the friendliness of Chiang Mai better than most, and that is also true of practically everything else. It is like everything that makes the city such a wonderful part of Thailand, distilled and contained in one resort.

I stayed at Lanna Dusita Boutique Hotel for one night. My stay was arranged by a third party with a view to providing a review. The room therefore did not cost me anything and it is highly probable that the staff were well aware of who I was and why I was there.