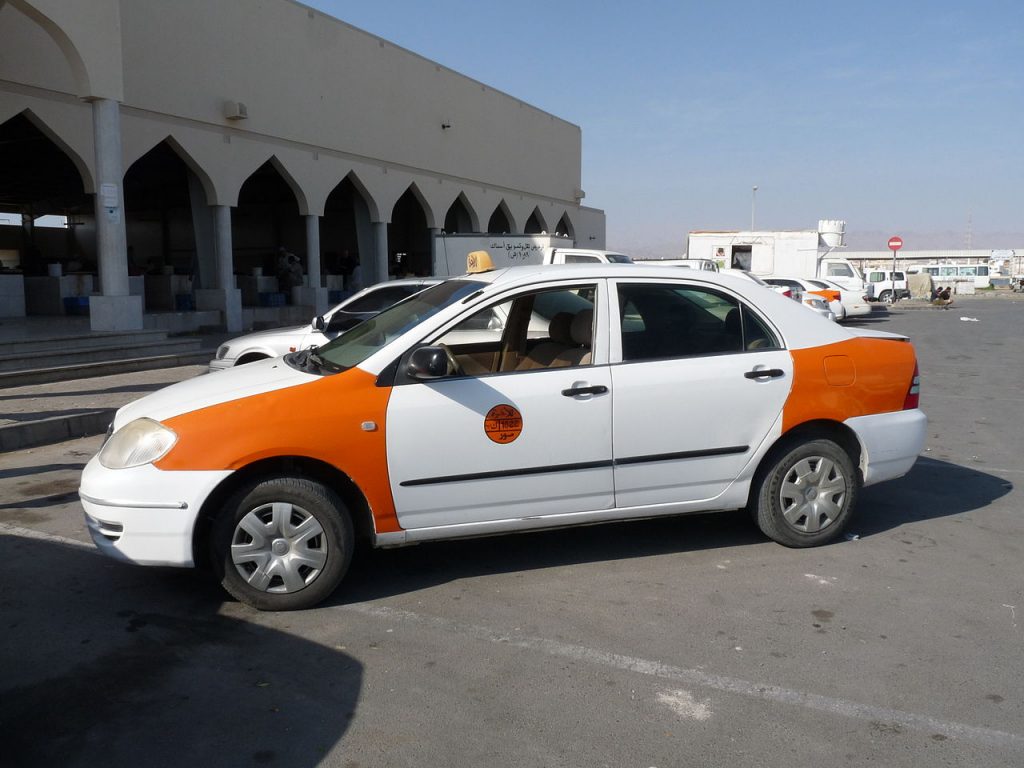 Getting Screwed by Taxis

Regular readers, who have been following the ongoing Adventures of Lady Macbeth, will perhaps be wondering why I decided to buy a car in the first place. I alluded to one of the reasons in the first post on the subject, when I said that Oman has pretty much no public transport. The nearest equivalents were minibuses, which followed seemingly random routes, were often overloaded and were not especially safe or comfortable. Extremely cheap, they were known as ‘Baisa buses’, after the sub-unit of the Omani rial. I used them maybe twice, if that.

The second alternative was a taxi. There were plenty of the orange-and-white vehicles plying their trade around Muscat and, after using them for about a year, I became determined to get my own transport. I have had more than my fair share of annoying experiences with taxis pretty much everywhere in the world. Here are some of what, for lack of a better word, I will call the ‘highlights’.

One of my early solo taxi rides came less than a day into what was technically my first solo travel experience. While I usually flew over to Thailand to see my dad with my brother and sometimes also my step-brother, there was one occasion when both of them were unable to get the free time. So, at the tender age of about 17 and as naïve as they come, I flew out to Bangkok on my own.

This happened to coincide with the time my dad had decided to have a little cosmetic surgery to remove the bags under his eyes, so he took me from the airport to the Amari Boulevard Hotel, got me settled in and told me to get a taxi the next day to Bumrungrad International Hospital, where he would be recovering from his operation.

When I went down to reception the next morning and asked for a taxi to the hospital, the staff looked a little confused, but I put this down to a language barrier. At the time, you see, I did not realise that the hospital is about 650 metres from the hotel – about a 10-minute walk, if that! However, a taxi was hailed, the destination explained, and off I went.

Evidently realising that he had a passenger who had absolutely no idea where he was going, the driver took me on a trip which must have taken about 20 or 30 minutes, going all around the houses and through some rather narrow, congested side-roads, all the while trying to sell me on anything from tours to dirty massages. Even then, he wasn’t satisfied with having made a 35 baht taxi ride up to over 100 baht. My dad only having given me a 1,000 baht note, the driver suddenly decided that he only had 400 baht change. By this point deeply confused and frustrated and just wanting to get out of there, I gave him the mother of all tips. A journey which should have cost me 35 baht or a 10-minute walk ended up costing 600 baht! In 2004, that was about £8 for a 50p trip.

“My Brother Will Beat Me”

Jump forward to 2009 and I’m in Muscat, on my way from my newspaper’s office in the Central Business District to the Grand Hyatt Muscat to cover a story. Sweating considerably in the desert heat, I finally manage to flag down a taxi, and he wants 5 rials for the journey. Having finally learnt how to haggle, I convince him that the correct price is about 2 rials, and we’re on our way.

Throughout the 13.5 km journey, I noticed that the driver’s traditional dishdasha is kind of ragged and grubby, his car’s not in a great condition and he’s blinking and sniffing a lot. He looks decidedly unhealthy. I later realised that these looked kind of like withdrawal symptoms from some kind of hardcore drug.

Reaching the end of the journey, I hand over my 2 rials, at which point the driver quite literally begs me to make it 5 rials. “My brother will beat me,” he pleads, still blinking profusely, but now seemingly fighting back tears. I’m still not convinced that is the true reason he wanted the higher amount but, not being hard-hearted, I gave him the extra 3 rials, though I seem to recall slamming the car door shut in annoyance as I alighted.

Another day, another story. If memory serves, I was on my way to speak to Nabil al Busaidi, an Omani adventurer. I’d already interviewed him about his trek to the North Magnetic Pole, which he was the first Arab to reach, and I was now hoping to talk to him about his next exploits. We were to meet at a housing development just north of the airport called The Wave Muscat (which now appears to have been renamed as Al Mouj).

Once again, having waited some considerable time, I finally got a cab from near the office in the CBD and told him that I wanted to go to The Wave. He looked blank, apparently having never heard of the single largest property development in town, which had completely transformed the coastline in the area. After a few more attempts at repeating the name, I added the name of the district it was in – Seeb.

This seemed to make a connection and his face lit-up. Having agreed a fair price (10 rials), we set off and I sat back for the fairly lengthy drive. The driver made a phone call, which was not very usual in itself, but I noticed that he clearly said “The Wave” in English amid all the Arabic. He then handed the phone over to me. Apparently, he was still not sure of where I was asking to go and had called up a friend who spoke better English. I tried the name again and met the same obstacle. I explained that it was behind the airport and, apparently satisfied, he asked me to hand the phone back to the driver.

About 50 minutes later, we arrive…at the Golden Tulip Hotel, just over the road from the airport – almost on the exact opposite side of the airport from The Wave.

By now deeply frustrated, I managed to convince my assigned photographer to come and collect me. He’d refused to come all the way back to the office to do so, but was rather more willing to basically drive from one side of the airport to the other and back. Suffice it to say, I was very late for the interview.

To be fair, my selection of bad experiences with taxis is far outweighed by my positive experiences. Some have been extremely helpful, most have been very courteous, a few have been willing to put the pedal to the floor in order to get me to my destination on time and the overwhelming majority have just quietly and quickly got me from A to B. It is simply that the negative experiences stick in my head much better than the positive ones – that’s just how my brain works. I generally have very little against taxis and their drivers, though I still prefer to be independently mobile.