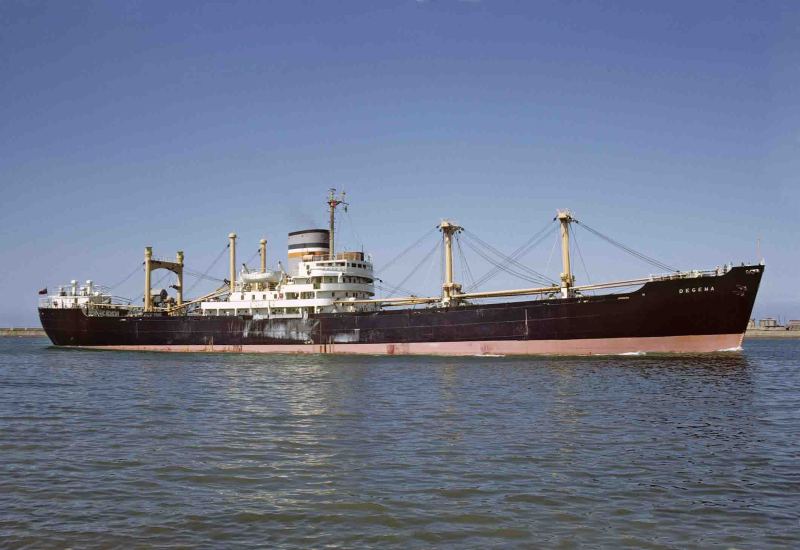 The Degema was a general cargo ship built in the UK in 1958 for Elder-Dempster Lines, Ltd. The 1,295th hull to come out of the West Hartlepool shipyard of William Gray & Company, Ltd., she was launched on 27th November 1958, making a short trip up to Liverpool to be baptised and registered with the name of a town in the River States of Nigeria. She was then completed and entered service with the line on 8th April 1959.​

The second of Elder-Dempster’s D-class ships (after the Daru and before the Dixcove, Dunkwa, Deido and Dumurra), the Degema was speedy for the time. She had a single screw, powered by heavy fuel oils feeding a single 5,500-bhp Doxford 67LBD5 diesel engine built by Central Marine Engine Works (part of William Gray & Co.), and was able to reach a top speed of 14 knots.

While her gross tonnage was listed as 5,902 tons at launch, most later sources give the figure of 8,153 tons and a deadweight of 10,111 tons. This might be a result of a modification on an unknown date, which saw the installation of heavier king posts at the aft. These would have improved her originally quite light cargo handling gear, which consisted of 10 derricks (two 20-ton, two 10-ton, two 7.5-ton, two 5-ton and two 3-ton). She was also fitted with tanks for transporting vegetable oil, latex or glycerine.

Elder-Dempster’s main shipping route ran from the UK (initially from the company’s home port of Liverpool and then from Southampton after 1972) to Las Palmas (Gran Canaria), Freetown (Sierra Leone), Monrovia (Liberia), Tema (Ghana) and Lagos (Nigeria). Ships of the line were also occasionally chartered, sometimes even serving briefly with other companies. The Degema may or may not have been under the command of a Captain “Paddy” Ralston while she sailed on this route.

Exact details of individual sailings are difficult to find, but it is possible that it was during one of the Degema’s special charter voyages that it docked at Port Harcourt in Nigeria some time in 1976 or ’77. At this time, my mum came across the ship and possibly even Captain Ralston. The ripple effects of that meeting continue to this day.​

In 1979, after completing 20 years of service with Elder-Dempster, the Degema was sold to Arphaxad SA of Puerto Cortes, Honduras and was renamed as the Veejumbo. She was later renamed back to Degema in 1982.​

On the 21st December 1982, the Degema sailed from Port Sudan on her final voyage. She arrived at the ship-breaking yards of Gadani Beach (just north of Karachi, Pakistan) on 30th January 1983.