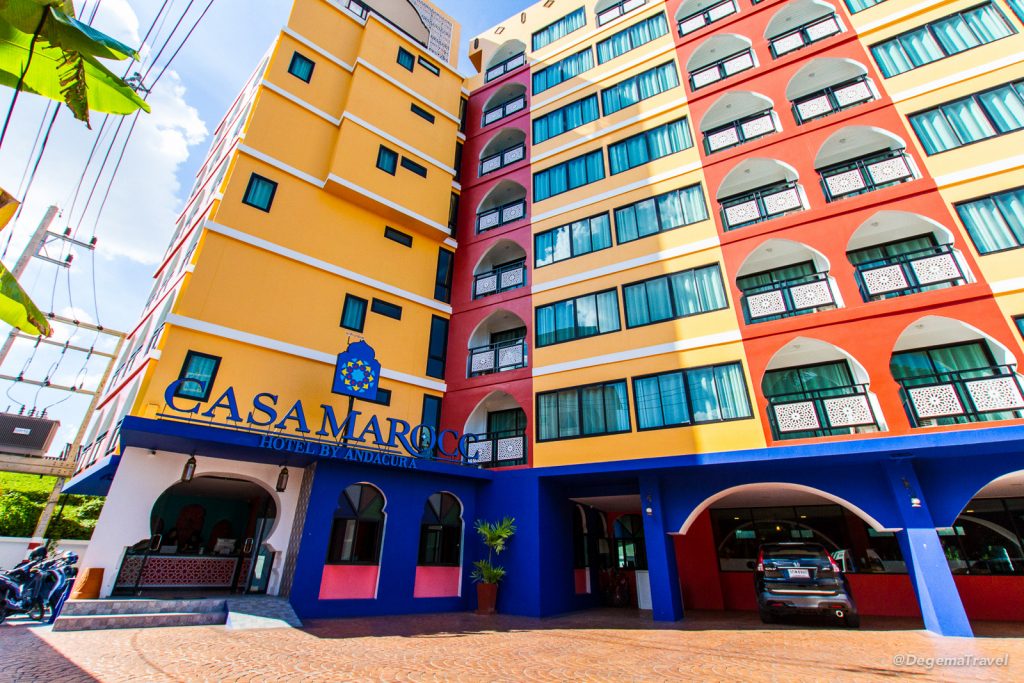 Reviewed on 11th November 2017. Details may become inaccurate over time.

In recent weeks, I’ve been up and down Thailand from end to end twice. My first trip up to Chiang Mai was to see Loy Krathong, which I wrote about in my last piece. The second time, I was going to attend my friend’s wedding. On the first trip, I stayed in a little hostel in the Old City part of Chiang Mai, which was comfortable enough, but predominantly unremarkable. For the second trip, I arranged a stay at Casa Marocc Boutique Hotel by Andacura Hotels & Resorts.

Casa Marocc is very firmly in the Muslim quarter of Chiang Mai, to the south of the Old City. Clues to this included the fact that the surrounding stores and food vendors sold mostly Middle Eastern dishes and the fact that the calls to prayer from Chang Khlan Mosque were very clearly audible, it being only 120 metres away. Fortunately, having lived in Oman for two years in an apartment with mosques well within earshot in two directions, this is something I’m very used to.

Other than being convenient for the mosque, the location of Casa Marocc Hotel by Andacura is genuinely pretty good. There’s a modest shopping plaza within easy walking distance, the Ping River is only a couple of hundred metres away, the fun Art in Paradise 3D gallery is not much further and the Old City is maybe a five-minute tuk tuk ride away, depending on traffic. It makes for a good combination of quiet and convenient.

Given that it’s only a three-star hotel, the thing which really impressed me about Casa Marocc Hotel by Andacura was the size of the rooms. I’ve stayed in modern five-star places with rooms literally half the size! Unfortunately, the room classes have the standard baffling names, as follows:

They at least managed to avoid my least favourite – Superior. However, as usual, that’s a rant for another day. For now, I will say that 30m² Deluxe room I was in had more than enough space for a king-size bed, a generously-proportioned work desk, a wardrobe, a widescreen TV, a small balcony and an en-suite bathroom. There was also a minibar (which contains no alcohol – another clue that this place is mostly for the Muslim market), a complimentary fruit bowl and tea and coffee makings.

The Arabic-style design was rather funky, but does seem a little out of place in Thailand, and especially in Chiang Mai, which is famous for its beautiful Lanna style of architecture. It did love the light behind the bed, though. A string of LEDs back-lit the Mughal-style arch in a very attractive way. Those iconically Arabic arches were all over the room and the hotel generally, including on the balcony access. Sadly, the view from said balcony was rather lacklustre, but the attractiveness of the room makes this minor fact forgivable.

Casa Marocc Hotel’s ground floor is home to the Aladin Café & Restaurant. Somewhat simple in its design, this little place has plenty of punch where it counts – on the menu. The menu is entirely halal, but is also very Thai, with just a few international options. For dinner on the night I stayed, I ordered room service (available from 10:30am to 9pm) because I was busy working at the aforementioned oversized work desk. A personal favourite Thai dish and a Chiang Mai speciality is khao soi – a chicken and noodle curry. It was delivered very promptly, was well-priced (at 99 baht) and was very tasty.

The following morning, I went down to try out the buffet breakfast, which is served from 7am to 10:30pm. While the choice was quite limited, the quality and variety still impressed me very much. Available dishes included stir-fried tomato, bitter melon soup, fried noodles, build-it-yourself salads and fried breakfast (using chicken as opposed to pork, obviously), among other common items.

Truth to tell, I didn’t get that many opportunities to interact with the staff at Casa Marocc Hotel by Andacura. Those interactions I did have were excellent. The guys on the front desk were friendly and professional, the lady on the neighbouring tours counter was very pleasant and chatty, the young man who delivered the room service was smart and courteous and the people in the Aladin Restaurant were doing a great job. All in all, the few staff I did speak to made every effort to ensure that I enjoyed my stay, not only at the hotel, but in Chiang Mai generally.

As the hotel has no pool or bar or much in the way of other social spaces or facilities, I got no other opportunities to test the service. However, as the basic purpose of a hotel – and especially a three-star place like this – is to provide a comfortable place to sleep, I think the limited facilities are perfectly adequate and the service, under those circumstances, is excellent.

Casa Marocc Hotel by Andacura calls itself a “premium three-star hotel”, boasting four-star quality at three-star prices. These boasts, I am pleased to say, are fully justified. The place may be rather limited in its facilities, but what little it does offer, it does very well. If you are looking for a comfortable room in a convenient location for a reasonable price, you couldn’t do much better.

As if it isn’t obvious already, I will reiterate that this hotel is primarily targeted at Muslim travellers, and particularly those from Arabic countries who like their surroundings to have an air of familiarity. Despite being neither a Muslim nor an Arab, I still very much enjoyed my brief stay.

I stayed at Casa Marocc Hotel by Andacura for one night. My stay was arranged by a third party with a view to providing a review. The room therefore did not cost me anything and it is highly probable that the staff were well aware of who I was and why I was there.