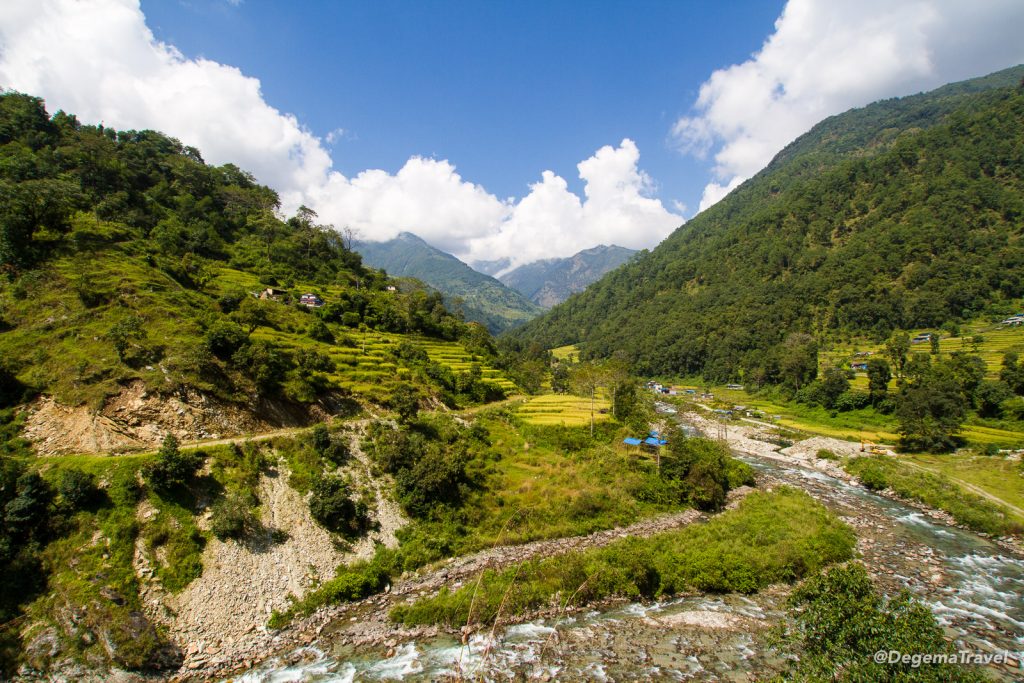 My sixth day in Nepal was also the first of my trekking trip, as arranged by Osho Vision Treks & Expedition P. Ltd. in Kathmandu. I was met, that morning, by the guide I had been introduced to the previous evening – Bishnu. He was a friendly, knowledgable chap, though not always the clearest speaker. He and I were driven up to the start point of the hike, which was in the little town of Nayapul, a good hour and 20 minutes up the road.

The initial stage of the trek was just a case of getting out of the town, which stretches down the valley created by the Modi river on the narrow ledge of land that’s flat enough to build and farm on. A sturdy but clearly very old bridge marked the entrance to both the town of Birethanti and the Annapurna Conservation Area, meaning that my ‘trekking passport’ needed to be stamped – something that Bishnu dealt with while I had a little rest and took some photos.

From here, we turned off the Modi and onto a little tributary – the Bhurungdi. This valley was wide, well farmed and vibrantly green. However, the path was getting gradually rougher and steeper, which started to become an issue for me. With few trees by the road, I was fully exposed to the midday sun and, more importantly, I had made a very foolish mistake: I brought all of my luggage with me on the trek, rather than travelling light and leaving the rest in Pokhara.

To be fair, it wasn’t like I was carrying a giant rucksack. Sure, my backpack was well over the standard cabin baggage allowance of 7 kg, especially when you add the separate camera bag, but it was still just a 35L daypack. However, having not trained for the trek in the slightest and living the sedentary lifestyle of an office worker, my body was not ready for all of that weight on top of Nepali inclines. Eventually, I had to hand my camera bag off to Bishnu. Since I felt somewhat guilty about even that, I didn’t often ask him to hand over the camera so I could take some photos, meaning that I have relatively few of even this first day of the trip.

We eventually reached a village called Tikhedhunga – a pretty, jungle-shrouded spot with a rope bridge across the river’s deep gorge. Or, at least, whatever you call the metal equivalent of a rope bridge. On the other side of it, another hiker asked if the bridge was still intact and, once we’d confirmed it was  and they continued on their way, I joked with Bishnu that I probably wouldn’t be in a position to say either way if it wasn’t – I’d be stuck on the other side of the river!

As pleasant a spot as Tikhedhunga seems, I only remember it as the beginning of my own personal Hell.

I’ve said, on several prior occasions (such as here and here), that stairs are something of a nemesis for me. They exhaust me at a terrific rate and, had someone forewarned me of just how many I would face on the Annapurna Loop, I would probably have stayed in Pokhara. In hindsight, I’m very glad no one did. At the time, I was both surprised and disappointed that I hadn’t died.

I was using a British Army surplus 3L CamelBak as my water supply for this trek, and I managed to drain it after having covered a shockingly short distance. I tried to count the uneven stone steps and would maybe get to about 60 before my heart was hammering and my head swimming and I would need a rest. Clearly I was not the first to find this particular part of the trek challenging as there were regular sidings off the zigzagging staircase where you could sit for a rest – or, in my case, collapse in a sweaty heap for 20 minutes. Little shops at each siding sold drinks and snacks – a service that, if I remember right, I had to avail myself of at least twice in order to refill my CamelBak.

For many years, I have experienced extreme shame around exactly this sort of situation. I think it may come from a camping trip to Brothers Water in the Lake District with my brother (somewhat ironically, given the name of the place), one of my sisters and her family, which I think happened in the the mid-2000s. My brother’s utter ineptitude when it comes to map reading led us up the near-vertical side of a valley, which I struggled to climb while all of the rest of my family breezed up it with ease. It’s possible that the shame originates from some earlier event, but that’s the one that stands out in my memory.

While Bishnu is obviously no relative of mine, the same shame reared its head as I saw that, while I was leaving literal puddles of sweat at every third or fourth siding, he didn’t even have a sheen on his brow, very occasionally sipped from a small water bottle and never even took a seat to rest. The fact that the fairly pretty owner of one of the stores was having a good giggle at what I assumed was my expense wasn’t helping. Stupidly, perhaps the greatest shame came from the thought that I was inconveniencing and frustrating Bishnu, especially as he said he wanted to reach a specific spot and doubted we’d be able to at the pace we were making.

I ran a few half-marathons during the time I lived in Phuket and the trend I discovered is that, over the course of 21 km, you eventually find a group of familiar faces that are running at about your pace. You’ll maybe pass each other every few kilometres or so, but you generally end up finishing at about the same time – at least, you do if you’re as unfit as me. Anyway, this happened on this hellish staircase – a Chinese girl and her Indian friend, travelling without a guide, were stopping often enough for me to pass them at fair regular intervals, only for them to pass me again when I stopped.

Something I observed in this couple was that the Chinese girl was far fitter than the Indian girl, just as Bishnu was to me. Finally, when it got too dark for Bishnu and I to continue and we stopped at one of the many teahouses along the route for the night, I went over to the girls and, with a lengthy preamble and apology for the weird question, I asked simply this: “How are you handling this?” I had to explain that, while the physical effort was a challenge for me, the mental torment was infinitely more punishing. They eventually got the gist of what I meant.

The Chinese girl gave a fascinating answer, which came in two parts. Firstly, she pointed out that, unlike the aforementioned half-marathons, this isn’t a race. There are enough places to stop along the route that you can take a break whenever you need, either for a short rest or for the whole night. That being the case, she was perfectly happy to wait for her friend out of basic kindness. Obviously, I don’t have that level of friendship with my guide but, as the girl pointed out in the second part of her answer, he’s being paid to go at whatever pace I am able to maintain. It doesn’t make a difference for him if I stop every 60 steps or every six steps – he still gets paid. As answers go, it’s an interesting mix of warm sympathy and cold pragmatism, but it cheered me up and I thanked her for it.

Sadly, I would not get the opportunity to catch up with the kindly pair and never saw them again on my trek. However, the following day would bring new encounters with people travelling at my pace.

I’m sorry that this particular entry ended with such a shocking look into my tormented psyche, but it’s essential for putting the rest of the trip in its proper context.