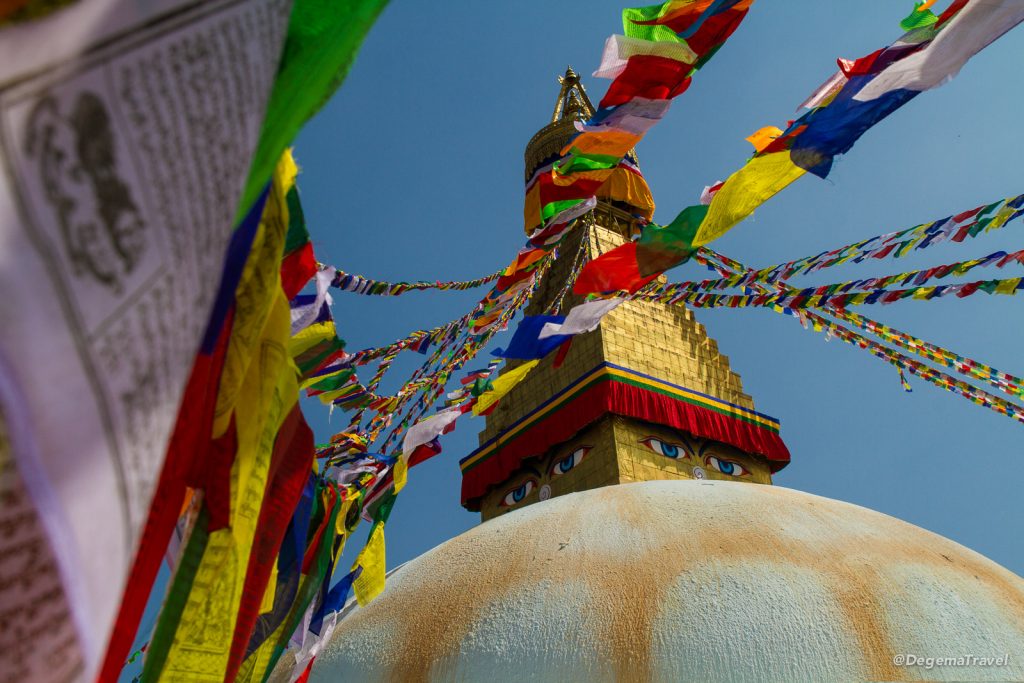 A Tale of Temples in Kathmandu

Nepal has quite a staggering array of beautiful tourist attractions — particularly temples and religious site. I’m delighted to say that they have largely survived or been restored to their previous glory since the April 2015 earthquake, as I discovered on 7th October 2019.

My day started with the interesting adventure of trying to find the house of my friend, Anima. She lives with her parents and two younger siblings in the eastern part of Kathmandu. As hailing a street taxi and trying to explain where I wanted to go would be hopeless and no buses went close enough to my destination, I used an app called Tootle — basically Nepal’s version of Grab in Thailand or Uber in most of the western world. The driver didn’t really know where he was going and took at least one wrong turn, but we did eventually get to the meeting point and Anima came and found me.

Meeting the family was a remarkable experience — about as far from my touristy experiences of the previous day as it’s possible to get. That’s not to say it was devoid of challenges, though. Of the household, Anima has hearing problems (which she’s raising money to get treated) that make it easier to talk to her in writing, her father barely spoke, her mother was keen to interact but can’t speak English and her brother was only interested in playing games on his phone. That only left her sister, Manima, who both spoke English and was interested in writing, which is something I can help with.

The big icebreaker was the late breakfast Anima’s mother kindly invited me to join them in. It was a rather tasty dal bhat — effectively Nepal’s national dish — which is supposed to be eaten with your hands. Anima told me that her mother had found it hilarious to watch me struggle to get the food in my mouth and not all over my face. Apparently it was like watching a child eating. Perhaps that’s why she refused to take “I’m full” as an answer and insisted on refilling my plate over and over again — she was enjoying the show too much to let it stop!

Fit to burst with rice and lentils, Anima, Manima and I caught a bus for the first stop on the day’s itinerary: Boudha Stupa. The 36-metre-tall stupa is one of the more popular attractions in Kathmandu and it certainly makes for some beautiful photographs. The problem I often have with religious sites anywhere in the world is that it’s difficult for me to feel a strong connection to them as I don’t really understand what they’re supposed to represent. It doesn’t mean I don’t enjoy seeing them — just that I feel like I’m missing some intrinsic part of the experience.

From here, we had a long walk to the next stop: Pashupatinath Temple. This is one of the more famous and sacred Hindu temple complexes in Nepal. Its location on the Bagmati River is quite a significant feature as there’s a line of funeral pyres alongside the flowing water, which the ashes of the dearly departed eventually end up in. That particular sight was, it must be said, rather moving. Unfortunately, the other geographical feature of the temple is that it’s located on a hill, which my knees and general lack of physical fitness had some objections about.

Our little group had a number of curious interactions. For one thing, a guy approached me saying that he collects foreign currency and asked if I could swap some of my home currency for his Nepali rupees. Unfortunately for him, I’ve heard that scam before, so he got nothing out of me. The more interesting one was talking to Manima about religion while Anima went to do her prayers in the part of the temple I, as a non-Hindu, was not permitted to enter. I explained that I am not only a non-Hindu, but am an atheist. Surprisingly, Manima hadn’t even heard the term before and was a little shocked to discover its meaning.

Sadly this marked the end of my guided tour of Kathmandu. It was getting towards being quite late in the afternoon and the sisters had stuff to do at home, so they plonked me on a Tootle back to my hotel. Shattered from walking around all day under the hot sun, I spent what was left of the afternoon and evening sleeping, only waking for a few hours to eat at the hotel restaurants before going back to bed.

The following day was the my last in Kathmandu before I was due to head off on the trekking part of the trip. I went looking for a post office so I could send some postcards home and found that it was closed for Dashain. Along the way, I came across a little stupa hidden in the middle of Thamel — Kaathe Swayambhu Shree Gha Chaitya. It’s supposedly a miniature copy the Swayambhu stupa, which I then went to see later in the afternoon.

This particular complex is located on top of a hill, with 365 steps up to its summit. While the climb is a little arduous and the 200 rupee entry fee for foreigners is a little disappointing, both are well worth it. It’s a rather compact complex, so it did seem a little crowded, but it’s still a beautiful spot. The views across the rest of the city are great, but I preferred the views of the stupa and surrounding monastery buildings.

The whole complex actually covers two or three peaks, the others being shorter and hosting less impressive attractions, making them therefore less crowded. I found a quiet spot where I could enjoy the sunset in relative peace on one of them, the only disruption being one of the brazen monkeys stealing my bottle of water. The experience made a pleasant bookend to my time in Kathmandu, marking the end of one chapter of my Nepal trip and the start of the next…

Well, nearly. There was one last noteworthy experience in Kathmandu. I decided to go out into Thamel that evening to see if I could find some kind of nightlife. I was aiming for a particular club that a quick bit of online research suggested was pretty popular. I found that, like the post office, it was closed, but there were some sounds of revelry coming from an Irish bar nearby. It doesn’t matter where I go in the world, there is always an Irish bar!

Inside, I had a beer at the bar while a fairly good band played some Irish folk music. A random French-Canadian bloke with a slightly malformed right hand and a substantial amount of booze in his system decided that I was his new best friend. It’s always fascinating when this happens. After this chap expounded his theories about the most attractive women in the world (because he seemed to think he was some kind of Canadian Casanova), I called it a day and headed back to my hotel, stopping along the way only to buy some souvenirs and another beer for the road.