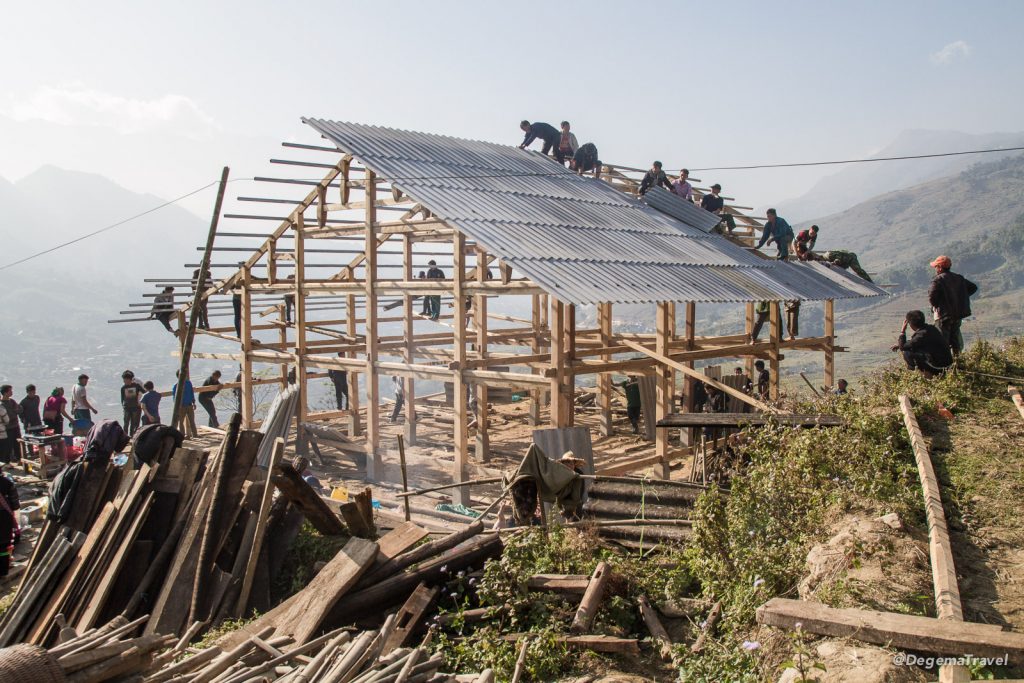 A Local Experience in the Muong Hoa Valley

I awoke on the 26th December 2018 perhaps the freshest and best rested I’d been all year. The dead quiet of the Mường Hoa Valley, combined with the unbelievable comfort of the bed in Mama Chu’s house and the fatigue from the lengthy trek to get there all combined to create the perfect conditions for a refreshing night’s sleep. I was a honestly quite reluctant to rise from the super-soft bed and its almost mattress-thick blanket but, with the rest of the household already up and about, I felt a little guilty sleeping in.

The household, which I barely touched on in my last post, consisted of Mama Chu herself, her rather uncommunicative husband and two or three of her five-ish children. The exact numbers are honestly a little difficult to pin down. Not only was our discussion and comparison of families a little hampered by the language barrier, but the village community was incredibly close-knit. It made it difficult to tell if all three of the girls that hung around the place were Mama’s daughters or if one or two were just good friends or grandchildren or cousins. I wasn’t helped in my calculations by the fact that the kids weren’t that much more talkative than the man of the house but, to be fair, I made as little effort to communicate with them as they with me.

Not without my phone

I studiously stayed out of everyone’s way while the morning chores were completed and a breakfast of fried rice was prepared. It didn’t take too long as the house wasn’t especially large. Adding to my description from the last post, there was a spacious and mostly empty chamber that was joined to the kitchen through a small area with a couple of beds where an indeterminate number of children slept. Beyond the empty room, at the far end of the house from the kitchen, were the main bedrooms – the guest room containing three large beds downstairs with Mama and her husband sleeping in the loft above.

Outside was a covered area which was effectively the living room since there was more natural light there than in the windowless house. There was a small pigsty and chicken coup against the outside wall of the kitchen, a few small patches of vegetable garden and a little outhouse containing a shower room and a toilet

With our fast well and truly broken and the morning air getting warmer, Mama and I set off for a trek down the valley. We didn’t get more than a few hundred metres before Mama realised that she’d forgotten her phone. I sat by the path for a while and waited for her while she nipped home to get it. We then continued down the valley.

We continued along narrow trails through tiny villages, sometimes walking right on the edges of paddy fields. We passed a couple of larger buildings were some kind of big party was happening – celebrating a birth, if I remember right. We walked past the church and I was a little surprised to find that many of the hill tribes are Christian. That being the case, the Christmas celebrations were surprisingly subdued

The conversation wasn’t exactly animated as we walked. Mostly, I was just concentrating on enjoying the view. However, there were some interesting points we talked about. One that particularly stood out was when we discussed the different tribes in the valley and their subtly different cultures. Mama pointed to different villages and explained that there were the Zao, the Zay and her own people, the Hmong. Each wore their headdresses in slightly different ways, among other details.

I’d noticed that some had large red spots on their forehead, including Mama, and I asked if this was also specific to different tribal cultures. “No,” said Mama. “That means they’ve got a headache.” She went on to explain that the stain on their head was a form of traditional medicine and that part of the treatment was to leave it on until it naturally faded. I found this misunderstanding a lot funnier than it really is.

As we got towards the dam at the end of the valley, the villages started getting bigger and a bit more developed. We reached one at about 10am, just as the school was letting the kids out for a surprisingly early lunch. We were walking down the path behind a remarkably well-dressed Vietnamese lady who really stood out from the rustic tribespeople, with tight-fitting jeans and high-heeled boots looking as out of place as they were impractical. Mama was unimpressed.

Once we were a little further away, Mama explained that all of the school teachers in the valley are Vietnamese – not local tribespeople – and that all of the schools teach only the Vietnamese language. She said that she does teach her kids to speak and understand the Hmong language, but that she doesn’t have the time to teach them to read and write it. Add the fact that the dam we later crossed had flooded a considerable amount of good farm land and I could kind of see why Mama was a little grumpy at this stage of our trek.

Now on the other side of the valley, we eventually reached the Cau May Waterfall and a little restaurant where the stream that flowed down the rock face here joined the main river. The restaurant served as a junction for the various trekking routes around the valley, which meant that I saw more foreign faces in this one spot than almost anywhere else in my entire Vietnam trip.

Now, I don’t believe in levelling the criticism of a place being “too touristy” because I think that’s a massively hypocritical thing to say, particularly because it’s usually other tourists saying it. However, the presence of so many foreigners (or, lets be honest, so much foreign money) did lead to a noticeable change in the local people. I was accosted and effectively hounded throughout our fairly short stop there by some extremely determined salespeople, wanting me to buy anything from more friendship bracelets to shirts, hats and jewellery. To be fair to them, the prices weren’t unreasonable and the goods looked pretty good. Sadly (for them), I’d already decided that I was going to buy my souvenirs from Mama’s village to help support her community. Ironically, I never got the chance, so left souvenir-less.

“This will end badly”

As we were making our way back up towards Mama’s village, we passed a group of women carrying huge loads of wood in baskets on their backs. Mama explained that they were on their way to help out a family in the village who were building a new house. She said that everyone chips in during the summer harvests and, as there’s no rice to harvest in winter, everyone spends this time building houses and the whole village again helps out. Mama said she’d have to leave me on my own for a bit while she contributed, but I asked if I could help.

Sadly, Mama was too good of a host to allow me to carry a load of wood down the hill, despite my asking to several times. She did invite me to come down to see the house being built, which was fascinating. All the men were passing sheets of wrinkly tin up to be secured in place to form the roof while the women were all helping to prepare the celebratory feast and looking after the children. Health & Safety clearly hadn’t reached this valley yet, going by the lack of helmets and high-vis jackets on the men and the fact that one of the kids seemed to be playing with a chainsaw.

With the roof completed, the ground-floor walls were up in minutes and a feast for maybe 100 people was soon laid out on tables and benches barely above floor height. I was kindly invited to join. I gratefully did, but I took one look at the unidentifiable dishes, which had been left exposed to the elements so long that they were already getting cold, and immediately knew I was going to regret this meal.

Being kind of tall by European standards (and therefore a giant by Hmong standards), my folding myself up to fit on the floor-height bench got a few giggles, though not as much as I got when I was being presented with the meal. I have absolutely no idea what I ate. There was definitely a fish (which was more bone than meat) and I think some goat and an extremely chewy part of a pig.

I should mention, at this point, that a colleague in Thailand had visited Hanoi only a few weeks before I set off on my trip to Vietnam and came back with salmonella. It is therefore nothing short of a minor miracle that I survived not only this meal but my entire trip without so much as a stomach ache.

The meal ended with a bowl being filled with a colourless liquid for me. I was informed that this was “happy water”. If I understood right, it was basically home-brewed vodka. It went down about as smooth as a bowl full of gravel and packed a mean punch. Mama and a couple of others who spoke good English were insisting I should drink it slowly, but there was an old lady a little further down the table who I’m fairly certain was calling me a wuss, showing off her empty bowl and insisting I drink faster. Her limited English meant that her conversation was a little difficult to follow, but I’m not totally sure she wasn’t trying to flirt with me, too!

Finally, with the air growing cold and the food all consumed, the party started to break up. Standing up again after several hours with my legs uncomfortably folded gave me a really painful case of pins-and-needles. I feel a bit sorry for the poor guy who accidentally nudged my foot in passing while I was waiting for Mama to say her farewells. Given my reaction, he must have thought he’d crushed my toes with his boots!

As we were walking back to Mama’s house, the cackling old lady still with us and still flirting (I’m sure she was offering to come and tuck me into bed or something!), we passed one of the larger “homestays” in the area. Unlike Mama’s, which really was a home to stay in, this was more like a hostel. I saw a group of maybe a dozen westerners sitting down to a dinner of fried rice and similar stuff. Not only were they using normal tables and chairs, but they were eating food that you could actually identify!

We continued on our way and, as I settled into the sublime comfort of my bed at Mama’s, I thought about my own dinner at the building site. There must have been easily 100 people there and I was the only tourist to experience that, despite the fact that the hostel we passed was only a few hundred metres up the path. I marvelled at my good fortune in deciding to accept Mama’s offer as tour guide and the unique experience it had led to.