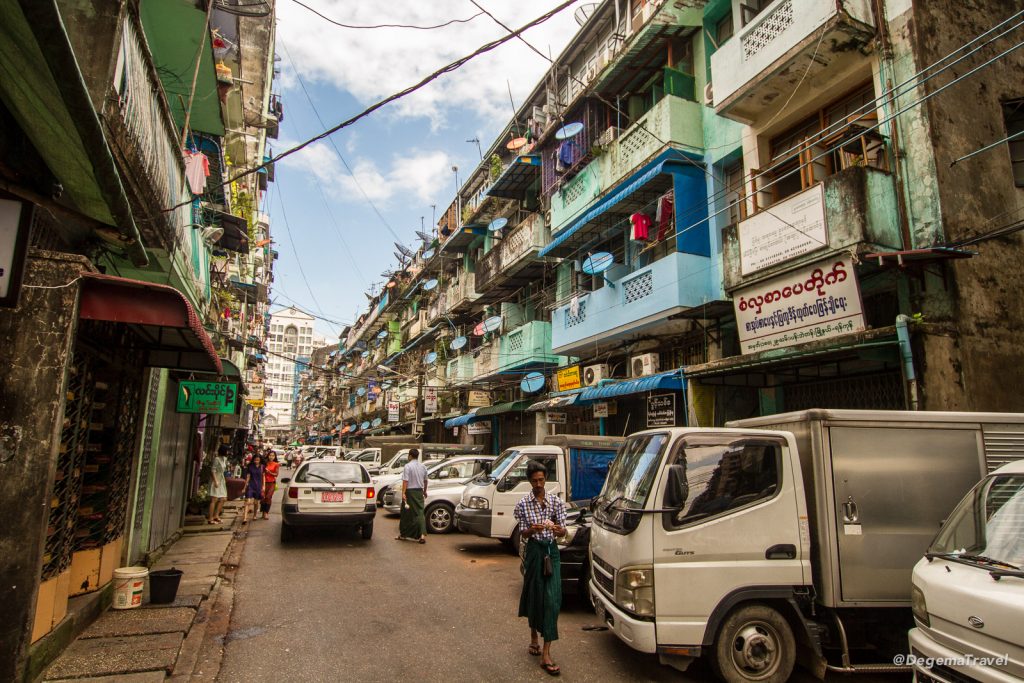 I’m not entirely sure what I was expecting when I arrived in Myanmar. Since my only frame of reference for the country was my grandad’s war stories, I suppose that a part of me was half-expecting it to be exactly as it was in 1945. In one or two regards, it actually kind of is.

However, my introduction to the relatively modern state of Myanmar was through a really very neat and shiny Yangon International Airport (RGN). Admittedly, the carpets look like something from the 1970s, but that’s pretty common in airports all over the world. Also, Immigration was spookily quiet. The flight in was only about three-quarters full and I had an entire row to myself – a first for quite some time, for me – with several rows behind me being completely empty. In spite it being the start of the high season and a flight from Bangkok (a popular tourist destination) to the country’s capital, it would seem that it is still not a particularly popular destination.

The first thing I had to do was change some currency. This, too, was an education in how not like some kind of Medieval backwater Myanmar is. I was actually a little frustrated to find that most of the information online is outdated. The web had insisted that I had to bring a plentiful supply of fresh US dollars into the country to prove that I could sustain myself for the entire trip. Firstly, no one asked me how much money I had brought and, more frustratingly, I could have just exchanged Thai baht directly into the local currency – Myanmar kyat – and thereby skip my money losing some of its value in the exchange process! Also, the common belief that airport forex booths always give bad rates proved false, too.

With no buses available from the airport, I had to grudgingly take an airport taxi. After a couple of very annoying experiences with those things (mostly in Phuket), I now innately distrust them, but had no choice here. Within a few minutes, I had noticed something wrong, and I quickly figured out what it was: In spite of the fact that traffic drives on the right-hand side of the road in Myanmar, the taxi was a right-hand drive car! Over the course of the next two days in Yangon, I was looking out for any left-hand drive vehicle and saw only a few of the bigger buses and one clearly very new car with the proper, much safer arrangement. Suddenly, the perpetual honking of horns and incredibly reckless driving made a lot more sense.

I had a think about this and may have come up with a logical reason for this weird disparity. I initially thought that perhaps the change to driving on the right had been a recent one, but many of the cars are quite new and all of the traffic lights, signs and road markings are all on the right sides. More likely is the fact that Myanmar is bordered by India to the west and Thailand to the east, both of which have a thriving automobile industry and both of which mass-produce right-hand drive vehicles.

My misconceptions about the sort of country Myanmar is continued to be broken on the ride into town. I looked around and saw a modern city, roughly equivalent to Bangkok. Ok, some of the buildings were a bit weathered and grubby, but others were shiny and new (especially all the banks, for some reason). There were big hoardings advertising normal, modern things, often in English. People were walking around dressed in modern clothes – generally jeans or suits. I saw a jogger in the park we passed, listen to music from a smartphone strapped to his arm. I saw a sign directing traffic to a Montessori preschool. Just…normal things, really. Again, I’m not entirely sure what I was expecting.

I said before that the plan for this trip was rather thin on details. Well, Noom had booked the hotel and I had absolutely no idea where it was or what it was called. I trust her judgement, though, and that led us to 29th Street in Downtown Yangon – the part of the city built during the British Colonial rule of Burma (as it was then) from 1824 to 1948.

This, to a certain extent, was more like what I was expecting. The literal definition of “bustling”, the numbered streets are barely more than a car’s width and all perfectly parallel, running perpendicular to the wide and busy avenues. Each corner has a collection of stalls and peddlers, with others roaming up and down the streets. The tall crumbling buildings bounced their cries around, giving them an ghostly echo while also prolonging them, to the extent that it was practically constantly noisy. Something rather remarkable we observed was that each street sold one particular item. Every shop on 29th street sold shoes (particularly flip-flops). Another street sold almost exclusively DVDs, another was just lamps, and so on.

Many – in fact, the majority – of the men we saw here were wearing the sarong-like longyi (or lungi) while the women were in the highly conservative (yet surprisingly figure-hugging) traditional dresses. Speaking as a man, the longyi seems like a really good idea in a country this humid!

Having failed to learn from my [potentially near-fatal] Songkran trip around the Gulf of Thailand, we immediately set off on a rather ambitious walking tour of Downtown Yangon, as suggested by the Lonely Planet guide (though the guide does not suggest setting off at around 10am, just as the hottest part of the day is starting). As even my Thai friends were wilting in the heat, we ended up cutting a few corners, but still saw some of the fascinating old buildings, many of them still with the same use they’ve had for nearly 200 years.

We went a little off-piste to add in the Botataung Pagoda, which was quite a fascinating if baffling experience. The home to a hair relic of the Gautama Buddha, the large golden pagoda is hollow, but with an intricate star-like structure of small subdivisions around the closed-off centre. All of it is lined with gold which, with orange lamps throughout, gave the place a distinctly orange hue. It was an exceedingly popular attraction as, apparently, was I – at least one person stopped to take a selfie with me, with others being more surreptitious about it.

While I’m largely used to this because it happens every now and again in Thailand, it isn’t as if I was the only non-Asian there. This, in itself, is quite surprising. Also like Thailand, Myanmar has a two-tier pricing system, with foreigners paying about 6,000 kyat for entry to Botataung Pagoda while locals get in for free. While I can accept that there is a massive disparity between how much locals are paid compared to how much disposable income the average tourist has, the thought of the [entirely justified] backlash should the UK (or any Western country, for that matter) try to employ this sort of system always makes me a little bitter.

After a couple of hours’ rest, we went to Yangon’s best-known attraction at around sunset. Unfortunately, the weather was rather drizzly, which meant that the sunset didn’t really add anything to the effect, but the sheer scale of Shwedagon Pagoda was deeply impressive. Being something like a Russian nesting doll, with progressively larger pagodas built on top of each other, you naturally cannot walk around inside this one like you can at Botataung. However, a walk around the outside and the multiple outer buildings is more than awe-inspiring enough.

What is less inspiring is the weird green mat they put down to provide a bit of traction. The entire temple is floored with tiles, which have been warn smooth by millions of feet. Add a bit of water and the strict rule about no shoes and socks and it isn’t that difficult to find yourself slipping, with at least one poor girl ending up on her backside right next to us. However, the matting they put down is a little too far the other way, having the approximate texture of a rock-strewn beach with the coarsest sand you can possibly imagine. Actually, it was rather weird to walk on because it reminded me almost perfectly of one specific beach! Nostalgia aside, it killed all of our feet.

Getting Around and Out

With our bus to Bagan leaving at 4pm the next day (and the mess our feet were in), we didn’t want to stray too far from the hotel the next day. We walked to Bogyoke Ang San Market, which was closed. We walked a little further to the red-brick Holy Trinity Cathedral, where we took sanctuary from a sudden and short-lived monsoon shower. Noom then suggested something a little crazy, but quite fun. She’s like that.

We jumped on a bus. Up to that point, and against my better judgement, we had been mostly depending on taxis. I lied before – I don’t distrust airport taxis. I distrust all taxis, for reasons which I will go into in a later post. Yangon’s proved surprisingly trustworthy, though, and the prices we were quoted were always the same for similar distances.

We had no idea where this bus was going. We just rode it until it started getting uncomfortably full. Expecting to step out in some unknown part of the city, we actually found ourselves back in front of Shwedagon Pagoda. This was doubly disappointing because the trip cost us only about 400 kyat each, instead of the 3,000 kyat taxi ride we had taken the night before. However, not wanting to spend another 8,000 kyat for entry to the pagoda, we went to a smaller one nearby before taking a short walk in the park.

The park was around the large Kandawgyi Lake. There’s a wooden walkway all of the way around and, while weatherbeaten and badly maintained, it hasn’t actually reach the level of being potentially dangerous. I doubt it is far off, though. Until then, the park seems to be a popular place for the local kids to go courting. While I regularly use such archaic terms anyway, it seems particularly appropriate here. Noom, in particular, found the old-fashioned romance of walking in a park on a sunny afternoon rather cute. We both found the young couple canoodling in the shade of a tree – hiding behind an umbrella – kind of funny, but logical, when we thought about it. With no malls, no nightlife to speak of, no beach and a highly conservative society, where else are young lovers supposed to go?

Finally, we got a taxi to the bus station. Calling it a “station” is extremely generous. It is, in fact, a couple of hundred tiny two-room offices, each with a massive coach parked outside and all set up in a remote part of town with narrow, badly rutted, barely surfaced roads. It is probably the least optimal place to have a major transport hub. However, we got there with plenty of time before setting off on the next part of our travels…