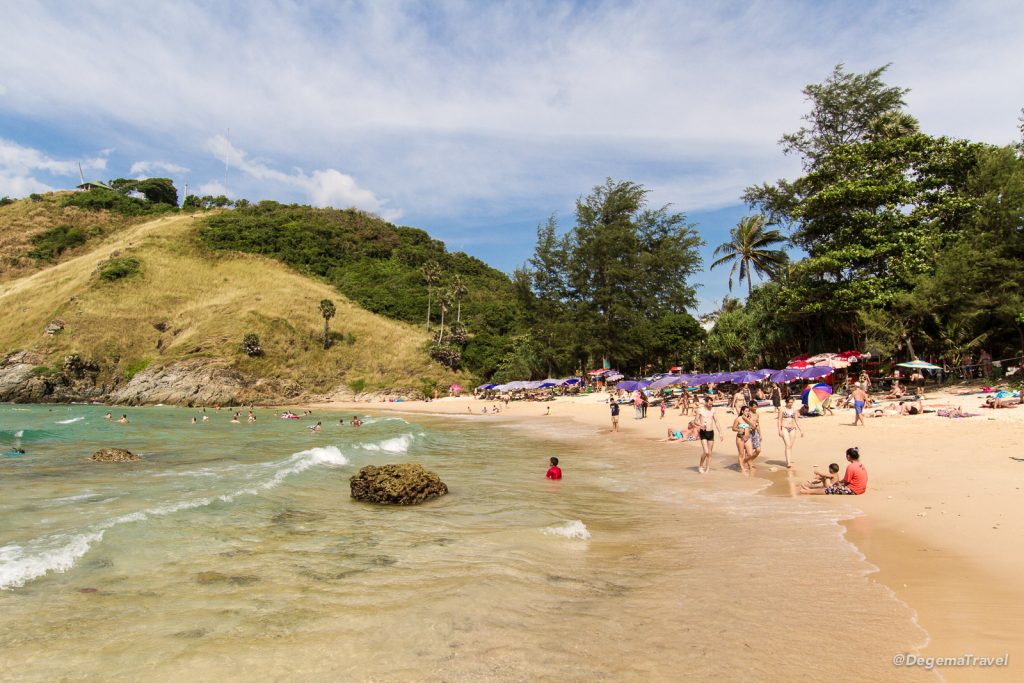 Ya Nui Beach is one of the most popular bits of sand in Phuket, which is actually kind of incredible. Among nearly 40 beaches around the island, it is certainly not the most convenient. It’s not at all bad, which is why I chose it for my beach day last weekend, but it’s kind of an oddball for Phuket.

I don’t have many beach days. It’s one of the most common misconceptions about the expat life: that we all spend every day on the beach. The reality is that few of us ever have the time and, when we do, we often lack the inclination. One result of this is the absurd Expat Tan, which I detailed previously. However, when the planets align and we find ourselves both in dire need of a restful day and with some time to spare, a day on the beach suddenly becomes extremely appealing and easily attainable.

Out of the Way

One of the main reasons why Ya Nui Beach’s popularity baffles me is that it’s kind of remote. It’s along the west coast, as all of Phuket’s best beaches are (indeed, as virtually all of Phuket’s beaches are – the east-coast ones are mostly mangrove swamps), way down at the southern end of the island. It’s roughly halfway between Phromthep Cape – the southernmost point of Phuket and a very impressive viewpoint – and Nai Harn Beach.

The beach is overlooked by the so-called Windmill Viewpoint, which is home to a small wind farm and a view arguably more beautiful than the one at Phromthep Cape. With these three significant and very popular points around it, it’s not that difficult to see how Ya Nui Beach first came to the attention of visitors. However, the fact that it is really not within walking distance of any big hotels means most people have to drive there, which is why it amazes me that it’s regularly packed. Of course, being only 180 metres long, it doesn’t actually take that many visitors to give the impression of popularity.

The Beach at Ya Nui Beach

Ya Nui Beach itself is very pleasant and picturesque. On my visit, I set my towel down right at the top of the beach, under what little shade was still available from overhanging branches of the trees between the road and the sand. These also cover a small parking area for cars and motorbikes. This area is where you’ll find the very limited available seating, including a beach swing, and the nearest approximation to trash cans.

It was already early afternoon when I arrived (because I’m trying to avoid repeating my past mistakes of going out in the midday sun), so the sun was shining directly onto the beach – hence the lack of shade. Other visitors had the presence of mind to bring their own shade since, unlike the bigger beaches, there are no beach umbrellas and sun loungers to rent here.

The sand on Ya Nui Beach is very soft. It is my barely researched theory that the sand in Phuket gets softer as you go further south. and, being among the most southern beaches, the yellow-white sand here is among the finest available. It isn’t as fine as the pure-white stuff on Koh Rong in Cambodia, but it’s not far off. This is one very good reason why people (including me) would drive so far out of the way for such a small beach.

The Sea at Ya Nui Beach

One of the more striking features of Ya Nui Beach is the big rock. The beach itself is in a sort of L shape, and a rocky outcrop sits in the sea right on the corner. People are often climbing up and down it and it’s quite a popular spot for photographers. Indeed, while I was there, I saw a pre-wedding shoot taking place there, with the Thai couple in full matrimonial regalia looking comically incongruous among the bikinis and speedos.

This rock, and those in the very rapidly deepening waters right off the long side of the L shape, make this one of the best beaches in Phuket for snorkelling. During the high season (roughly November to April), the seas along Phuket’s west coast are perfectly placid and ideal for swimmers and snorkelers. The winds are now starting to turn, though, making conditions better suited to surfers and reducing underwater visibility to effectively zero, so I wasn’t able to see much when I donned my mask and snorkel. I just managed to make out a few small shoals of tropical fish struggling against the powerful currents, as well as a couple of corals. As the area attracts tropical fish, it naturally also attracts both anglers and seabirds like cormorants, both of whom tend to perch on the rocky headlands at either end of the beach.

The Facilities at Ya Nui Beach

As I said above, the popularity of this particular beach most surprises me because there are no big hotels nearby – no significant population of tourists within easy walking distance. The four-star Windmill Phuket Hotel, with 43 rooms, is as big as it gets, and is about a 250-metre walk away. There are also a couple of small guesthouses and a little local restaurant or two, but that’s about it.

Probably as a result of its popularity, a few local entrepreneurs have brought some interesting water sports to Ya Nui Beach. For about 100 baht, you can rent a kayak or a stand-up paddleboard, and snorkelling gear is also available. The beach gets regular visits from food and drink vendors on motorbikes with sidecars. I should mention that I didn’t avail myself of any of these services on my visit last weekend, so I couldn’t tell you what they’re like. They looked okay and I didn’t notice anyone complaining.

Windmill Viewpoint is definitely worth counting among the things to see and do nearby, but I hesitate to call it within walking distance. I certainly wouldn’t want to walk up that hill! I drove up there in the late afternoon, as the parasailors began their flights from the steep and gusty hillsides. Sadly, it was too cloudy for a good sunset.

Ya Nui Beach would not be among the best places to watch the sunset in Phuket, incidentally. The headland on the other side of Nai Harn Beach (Laem Krating) and the small island in the bay (Koh Man) effectively block the view of the western horizon. Windmill Viewpoint is certainly an improvement, but there are plenty of better places with unobstructed views.

The Atmosphere at Ya Nui Beach

I certainly enjoyed my beach day on Ya Nui Beach. It wasn’t exactly peaceful since many people on such a compact beach created a constant background noise of chatter. There were a few Thai families with young kids playing in the surf, adding the occasional excited squeal to the twittering of birds in the trees behind me and the crash of the waves in front, but I don’t resent them their fun and it didn’t overly disturb me.

As for the tourists, they seemed to be mostly Russian, with a few Europeans. There was a surprising number of ladies in headscarves – probably Thai Muslims, since Phuket has quite a considerable population of them. They tended to stick to the shorter side of the L, which has the calmer and shallower waters.

Overall, the beach as a lot of interesting assets which make it worth the long drive south to spend a day on. I certainly enjoyed myself, and I’m not even much of a big beach fan. In hindsight, perhaps its not that surprising that this would be such a popular place.