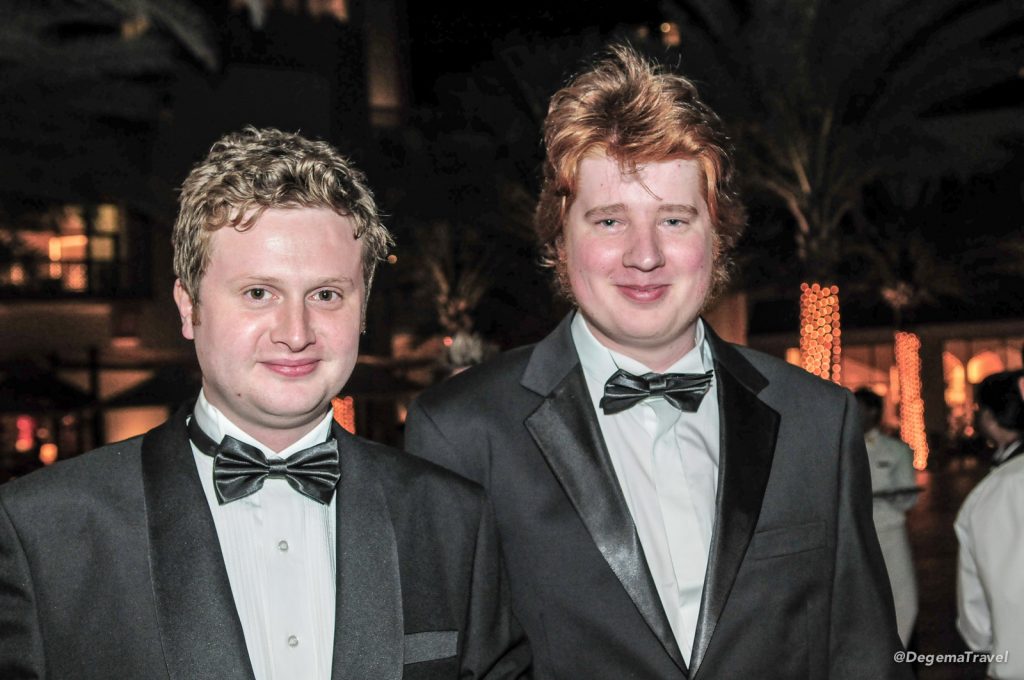 Why I Own a Tuxedo

I seem to recall reading or hearing some general life advice, at some point, which advised owning your own tuxedo. The suggestion was that it would save you money in the long run since renting them is expensive. I think that assumes that you would go to a great many high-society events in your life because I have owned a tuxedo since I was 21 and I think I’ve used it maybe twice in the decade since.

The reason why I bought such a fancy (and seemingly unnecessary) suit when I was just 21 is one of those daft expat stories which I enjoy sharing, even if it is a little embarrassing. As with most of my stories, it comes with a lot of preamble. It starts with my arrival in Oman in early-February 2009.

I was hired to work as a reporter for Apex Press and Publishing in Oman with five other Britons, all of whom joined over the course of about three months. We all started as general features writers for TheWeek, the imaginatively named weekly magazine. We each specialised simply by the process of finding stories and doing them well. I had wanted to specialise in defence stories, but I bungled my shot at it (that’s worth a blog post, too). The person who aced it has since gone on to be Editor-in-Chief of a specialised defence and aviation media company.

My specialisation, as you might expect, was travel and food. The travel bit came later, but I established myself as the food review guy quite early on. I was sent to Muscat City Centre, the city’s fanciest mall (at the time) to report on the updated menu at The Noodle House. I got a bit carried away in writing it. What was supposed to be no more than a few hundred words introducing the new dishes ended up as a detailed review of each. I finally asked the editor how much detail they wanted when I was at about 1,200 words.

The executive editor – the CEO of the company, through whom every single decision had to go, from individual story selection to leave requests and expense authorisation – took a look at the long version and was supremely impressed. She later gave me a weirdly second-hand compliment, saying to another person: “Not everyone can write food reviews. This guy can [pointing at me, because I was in the room at the time].”

I rewrote my menu update story for The Noodle House and was then asked to do a short review for the place, too. At this point, I was introduced to the Oman2day Restaurant Awards. Apex organised it every year, selecting the best eateries from quite a broad selection of categories. It was organised under the masthead of the company’s monthly general features publication, the now closed OmanToday.

A part of the event was a small book of reviews. The front cover image was of a fancy restaurant place setting, with a name card on the plate. This, quite creatively, acted as the place setting at the awards ceremony, which involved a very fancy meal at one of the best hotels in Muscat. My rewritten review of The Noodle House would become one of the reviews in that book. I was then asked to go and do a second.

The seafood buffet at the Al Khiran Terrace at the Al Bustan Palace hotel was quite an extravagant event to be sent within my first month of moving to the country. I hadn’t even had my first pay-packet yet, so I had to get my expenses in advance so that I could afford it! Fortunately, I was permitted to bring a couple of other people to the review with me because, at the time, I wasn’t actually that fond of seafood.

The review I wrote was the first of what I would later characterise as “criticism by omission”. Basically, in about a 300-word review, I never once mentioned the food because I didn’t particularly like it. I talked about literally everything else, including the décor and atmosphere. Sadly, this would become a technique which I would get a lot of practise in, particularly while writing reviews for restaurants which advertised with the magazine I edited in Pattaya.

Having written two reviews for the accompanying book, I was invited to attend the grand ceremony – the Oman2day Restaurant Awards 2008. It has routinely been held at the Al Bandar ballroom of the Shangri-La’s Barr Al Jissah Resort & Spa – probably one of the swankiest rooms in the country, short of the Sultan’s palace. The invitation explicitly specified that it was black-tie.

First problem: There were no tuxedo rental companies in Muscat in 2009. I would need to buy a tux. That’s the short version of the story of why it’s still sat in my wardrobe to this day. Second problem: I still hadn’t finished a full month of work at Apex, so I still hadn’t been paid. I had to get an advance on my salary just to be able to buy a suit I would almost never wear again. Third problem: I hate clothes shopping. I spent the absolute minimum amount of time in the Pierre Cardin store just over the wadi from my apartment. The monkey suit – which cost about 100 rials – barely even fitted properly on the day I bought it!

The story I’ve told so far is not especially funny or embarrassing, right? Well, the dumb bit was on the night of the party itself. The fact that I couldn’t figure out how to fasten a simple pre-tied bow tie meant that I looked even more out of place than I felt. However, the bigger problem was that I really was not used to the idea of haute cuisine when I was 21. I wasn’t totally sure if I’d get a proper meal or just finger food and, more importantly, I didn’t know if I would be able to stomach it.

I decided, in a moment of supreme stupidity, to eat before I went to ceremony. I ordered a large stuffed crust margarita from Pizza Hut – an order and habit which would become so common over the next two years in Oman that I would develop a depressing familiarity with the delivery guys. I consumed the pizza in its entirely, then headed off to one of the finest hotels in the country. I was presented with a five course meal of some of the best food I have ever had to turn away, having filled myself to capacity with second-rate stodgy pizza.

Nothing went right that evening. Having been designated the food correspondent, I was required to gather interviews with judges and participants for the article in the next issue of TheWeek, as well as more detailed write-up in Oman2day (that, also, is a story in itself). My voice recorder chose that evening to fatally crash. What a way to start my career in food writing! On the bright side, I still have the tuxedo as a souvenir; a physical reminder of the lessons learnt. Plus, of course, I might eventually get invited to some more swanky events, for which I won’t need to get a rental.