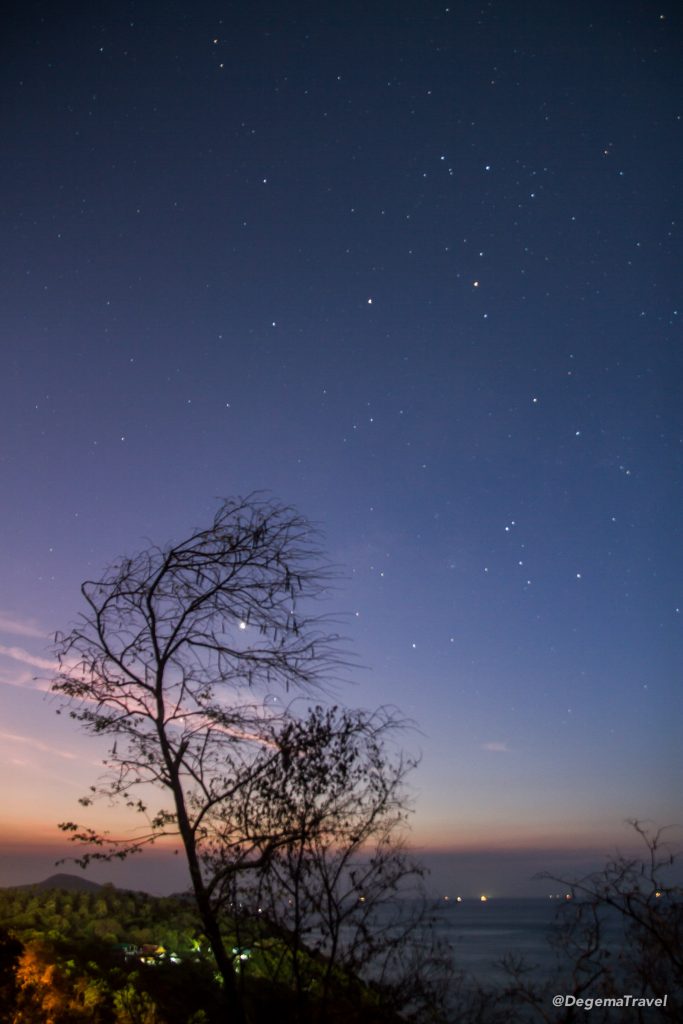 Still catching up with the Project52 posts! At this rate, I might just have caught up with it by the time Project52 2017 kicks off! I’m only a couple away, now, though.

I was, for a change, totally prepared for Week 5’s shot. I knew the theme was “Morning” and I already had a picture in mind. I had read on Coconuts that there would be five planets visible in the night sky. I have a bit of an interest in astronomy, so I knew that would be my shot, particularly when I read that all the planets would only be visible just before dawn. I also discovered that the best view would be southwest, so Phromthep Cape – right on the southern tip of Phuket – was the obvious choice. The fact that it’s also a beautiful, rugged viewpoint was a bonus.

I should explain that my interest in astronomy is not even at the amateur level. I don’t own a telescope, don’t regularly go stargazing and can only reliably identify a handful of constellations. However, I find the night sky beautiful and the science behind it – which I know a little bit about – is fascinating.

I did my research this time. I checked the time of dawn (around 5:30am), the time it would take me to drive from my apartment to Phromthep Cape (about 40 minutes) and I added a bit of extra time for me to get up and out of bed, knowing full well that I am not a morning person. So, as 4am on Saturday 30th January 2016 rolled up, my alarm went off. I took one look at it, switched it off, rolled over and went back to sleep.

Okay, not the most successful first attempt. Fortunately, I actually managed to wake up properly on the Sunday morning and I drove off to the cape, which was a fascinating experience in itself. I expected to find the whole island almost deserted at such a time, with barely a car on the road. Karon and Kata were certainly like that, but Patong was actually just as busy as it was earlier that day when I went into town for lunch! It’s a nightlife city, though, so that’s to be expected.

I reached Phromthep Cape after only a few run-ins with over-excitable and rather aggressive dogs. I then discovered that my research wasn’t as thorough as I thought. I had failed to factor in the fact that the huge spot lamps at the site were still brightly blazing at that time. That’s not even mentioning the Kanchanaphisek Lighthouse, which is situated up on the hill overlooking the cape! It was not quite the darksky spot I was hoping it would be.

Fortunately, after a few minutes, I managed to find a nice dark spot with a good angle to the southwest. I set up my tripod, cursed the fact that I’d forgotten my remote shutter release, and started snapping. I played around with settings, raising and lowering ISO or apertures to see what effect it would have, but the view was still the same – fantastic! With the lens that I had on, I could only get three of the five planets in frame: Mercury, Venus and Saturn. Mars was just out of the shot and Jupiter was right behind me.

Being able to see that much of the solar system at one time was impressive. It gave a feeling of space and perspective – like I could feel how the whole thing works. Of course, it was about 5am at the time, so that could have been my imagination. Anyway, as the sun crept up over the horizon, I got my finest shots, including this one:

I tried a few adjustments, like lowering the angle to try to get more of the sea into the shot or doing a landscape one, but none of them worked out quite as well as this picture. I was a little disappointed with the fuzziness of the tree. I would have liked to have got that sharper, but the fact that I had to manually release the shutter meant that a certain amount of camera wobble would be inevitable and, with a 30-second exposure, it would inevitably have consequences. I also later wished I’d brought my telephoto lens to see how close I could get to the planets and if I could see them any more clearly than just large coloured dots.

After another 30 minutes, the light was getting brighter and the cape started filling up with cyclists getting ready for some kind of race. I packed my kit, rode home and went back to sleep.