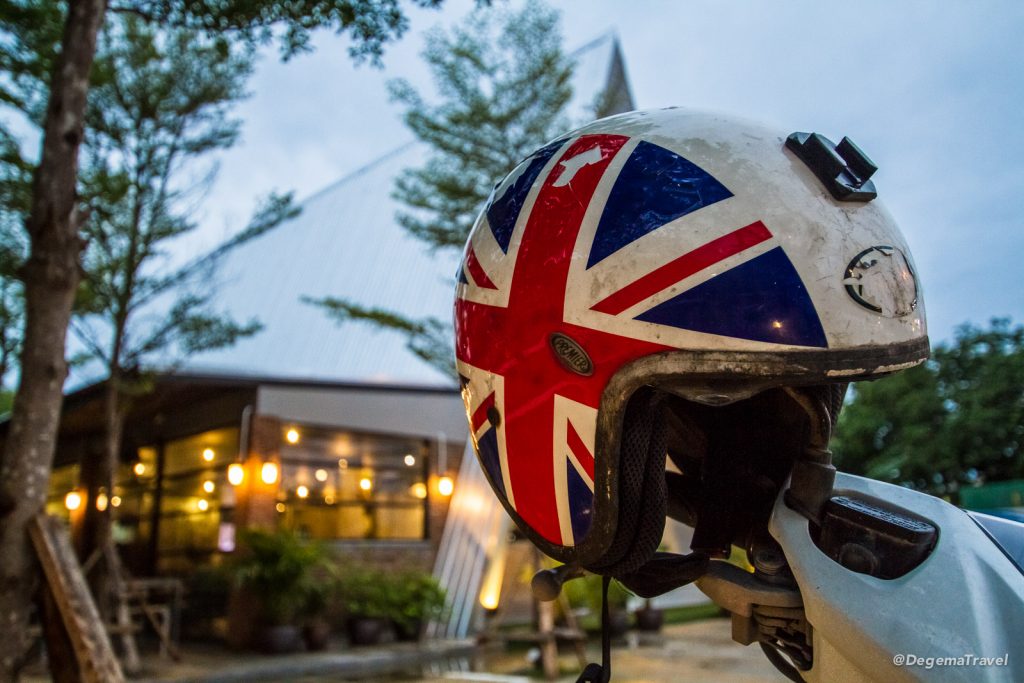 I’m still way behind on these posts, but it is rather poignant that I should be writing about Week 27 today of all days. Today – 1st August – is the day that I feel the most patriotic fervour due to the fact that I am from Yorkshire in the UK and today is Yorkshire Day. This, coupled with the fact that I am writing about the photo I took for the theme of “Patriotic” for my Project52, gives me the chance to write about what being an expatriate means to me.

I am frequently asked if I like my home country, particularly by Thais. It’s a fair question and I don’t mind being asked. After all, I live about 9,500 km from the UK and very rarely go back to visit – it is fair to assume that I probably don’t like the place. The fact is, however, that I actually do like the UK. I just like living outside of it more.

I vaguely remember hearing or reading something about how Americans in particular do not like either living overseas or specifically the term ‘expatriate’. Supposedly, it was because of the word’s root: ex-patriot. Literally, someone who used to be but no longer is patriotic. Of course, I might have just made that up since I can’t recall the exact provenance.

Anyway, the point I was making is that I am not a former patriot. I am proud of my nationality, of my country and of my fellow countrymen and women. Granted, British history is among the bloodiest in the world, but we, as a nation, have learnt from those lessons (well, most of them). Besides, I defy anyone to name a single country which is entirely blameless because, while I do not claim to be any kind of a historian, I’m reasonably confident that there is no such place.

I have ended up getting into quite heated discussions on social media because I choose not to celebrate St George’s Day. Yes, he is the patron saint of England (among quite a lot of other things), but the fact is that I am not a Catholic and England is not a Catholic country. The veneration of saints is a purely Catholic practise. The official religion of England is the Church of England – a Protestant faith. I, personally, am an atheist. That is why my day of patriotic celebration is today.

The first day of August was designated as Yorkshire Day because it commemorates the Battle of Minden, fought in 1759 in what is now Germany, as part of the Seven Years’ War. Troops of British regiments engaged in the battle picked flowers in nearby gardens on their way to the battlefield so that they could identify each unit. Members of the 51st Foot (King’s Own Yorkshire Light Infantry) chose the white rose to pin to their jackets. Subsequently, the white rose became the symbol of Yorkshire.

Being patriotic on such a small scale – proud of my county rather than the whole country – may seem counter-intuitive, but it makes perfect sense to any Brit. There was a particularly poignant part of a stand-up comedy routine by Peter Kay which detailed how British pride works. Let’s take me as an example: I am from York and, as such, I am duty-bound to dislike people from, for example, Leeds (another large city in Yorkshire). However, if faced by a person from Lancashire (the next county over), all Yorkshiremen unite, regardless of which city they are from. When faced with a person from London, Yorkshire and Lancashire will unite as Northerners. When faced with a Scot, Yorkshire, Lancashire and London will unite as Englishmen. When faced with a Frenchman, all the above will unite as Britons, and so on. Theoretically, all you would need for perfect peace around the world would be life on other planets!

How does this come back to my Project52? Well, when I had the choice of what pattern crash helmet I would get and one of the choices had a Union Flag design on the side, it wasn’t a particularly trying choice. As much as I prefer to live overseas and far from the UK, I still retain a strong emotional attachment to my nationality. It is part of how I retain my sense of identity when I am so far from home, family and familiar surroundings.

This picture was actually another rush-job photo, taken on the very last evening before the deadline. I was actually waiting for my friend to arrive so I could do a restaurant review at the place in the background. I thought that this background did actually make an interesting counterpoint to the “patriotic” helmet. It kind of told the story of how and why I am an expatriate. I am here to work and pursue my career. The fact that I am 9,500 km from home is largely irrelevant. I also feel that the “patriotic” helmet against the background indicative of my job shows that, while I am an expatriate, I am not an ex-patriot.

Talking technically, I am very pleased with how the shot came out. I boosted the clarity in post-production, which brought out the grime and damage of around four years of abuse the helmet has taken, but the colours shine through regardless. The lighting effect, while very cool, was entirely unplanned. It would have been better had the metal roof in the background not been exactly the same colour as the cloudy sky, but there wasn’t a whole lot I could do about that (other than use a different background, I suppose).