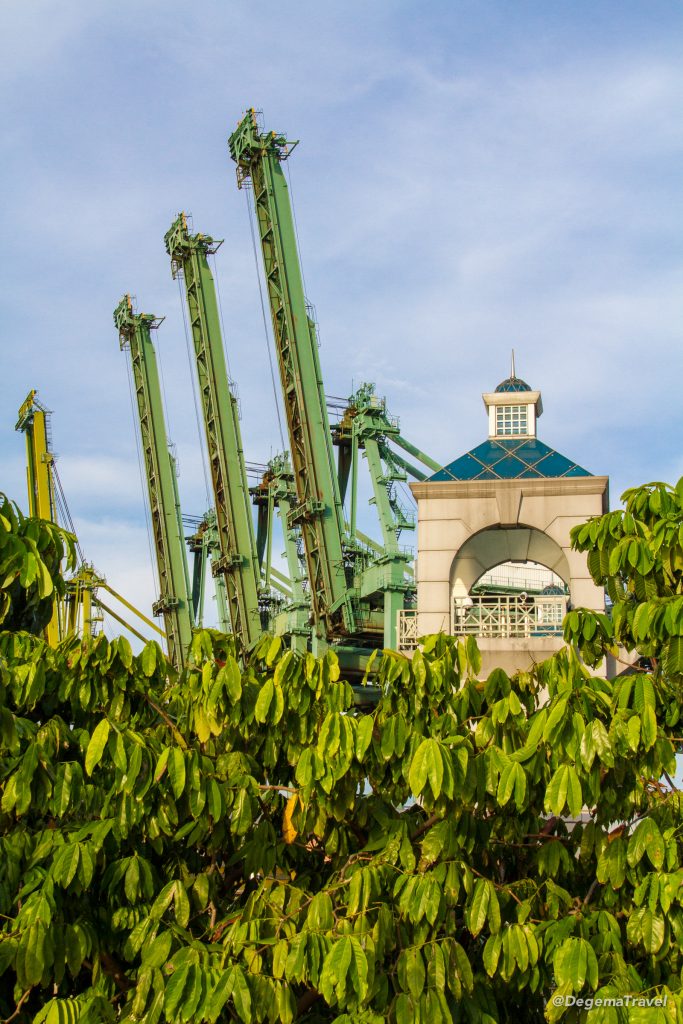 The fact that I was in Singapore for the start of Week 20 of my Project52 presented a fairly obvious challenge to me. How would I go about getting nature photograph in a major city? And not just any city, but one which is famous for using pretty much every scrap of the limited available land for some kind of high-rise building?

As it turned out, this challenge was not especially…well, challenging. As I didn’t really grow up in big cities, I don’t really appreciate how much green space you will often find in them, including expansive parks and even, in the older cities, places where the unstoppable force of nature has tried to take back the land occupied by concrete and steel. In Singapore, a huge area of land south of the famous Marina Bay Sands has been converted into a botanical garden, which I visited with my friend Jiew (CEO of Traveliss.com) and her family.

The Gardens by the Bay are an impressive combination of the striking beauty of nature and the remarkable ingenuity of mankind. Two huge glass-and-steel bubbles contain a huge array of delightful plants from around the world, fantastically presented and well cared for.

Stepping inside the surprisingly cool and dry first greenhouse (the Flower Dome) was like walking into a cricket bat, though, because I was suddenly clobbered in the face by my first really serious case of homesickness in years. My mum loves gardens and gardening and I couldn’t help but feel that she would love this place and that visiting it with her would have made the experience so much more special. At S$28 entry for adults (S$15 for children), its not even stupidly expensive, thought the flights from the UK to Singapore obviously are.

Wiping tears from my eyes the whole way around, I went through to the second dome – Cloud Forest. As the name suggests, there was rather more water in the air of this taller greenhouse. This was partially because the humidity is set higher to support the rainforest plants and also because there is a giant manmade waterfall in the middle, which the walk ways go through and around in higher and higher spirals. I took what I thought would be my Project52 shot of that waterfall and, moments later, the water got too much for the wide angle lens I was using and it fried the circuits.

What happens now is that I can take a picture, but it is always followed by a warning that communication between the camera and the lens has been interrupted. It suggests cleaning the contacts, but I’ve done that and the problem persists. Waiting a second or turning the camera off and on fixes the problem, so the connection error is obviously just a brief one, but I’m worried that constant errors like this will damage the camera’s firmware, so I’ve had to replace the lens. If anyone has any suggestions of solutions, I’m all ears!

Anyway, I was about to post the photo as Week 20’s Project52 shot when I checked the date it was taken and realised it was actually on the wrong day – it was before the Week 19 deadline and, therefore, before Week 20 even started. I therefore had to improvise and find another photo.

A little later in the trip, Jiew and her family had gone to Universal Studios Singapore®, which I wasn’t particularly interested in. After resting up my battered feet (see Week 19 for why they were battered!) for a lot of the morning, I eventually hobbled up to the Singapore Cable Car for the ride over to Sentosa Island. In doing so, I noticed the expansive Singapore Docks and thought that would make a great photo at ground level, so I limped and grumbled across to the bridge which supports the train, boardwalk and road routes, only to find that my view of the docks was blocked by, of all things, nature.

While certainly not the picture I wanted – either of the docks or nature – I am actually quite proud of this week’s Project52 photo. Better than any other shot I took during the week or even during the time in Singapore, I feel that this perfectly shows the interplay between the natural and urban landscape. It shows how much we depend on nature’s beauty to hide the ugliness of our own constructions, particularly the essential but unattractive stuff like docklands. The green-painted cranes even try to mimic the trees themselves.

Despite its reputation for being a solid 719.1 km² of city, Singapore is a surprisingly green and clean place, with large parks, and plenty of small trees and flower beds in between. Sentosa, in particular, is a verdant and beautiful place – like a microscopic Phuket alongside such a huge city. While a wide shot from a high vantage point may have illustrated that a bit better, I think this very small scale view of the stark contrast between the angular cranes and the soft leaves is just as effective, if not more so.