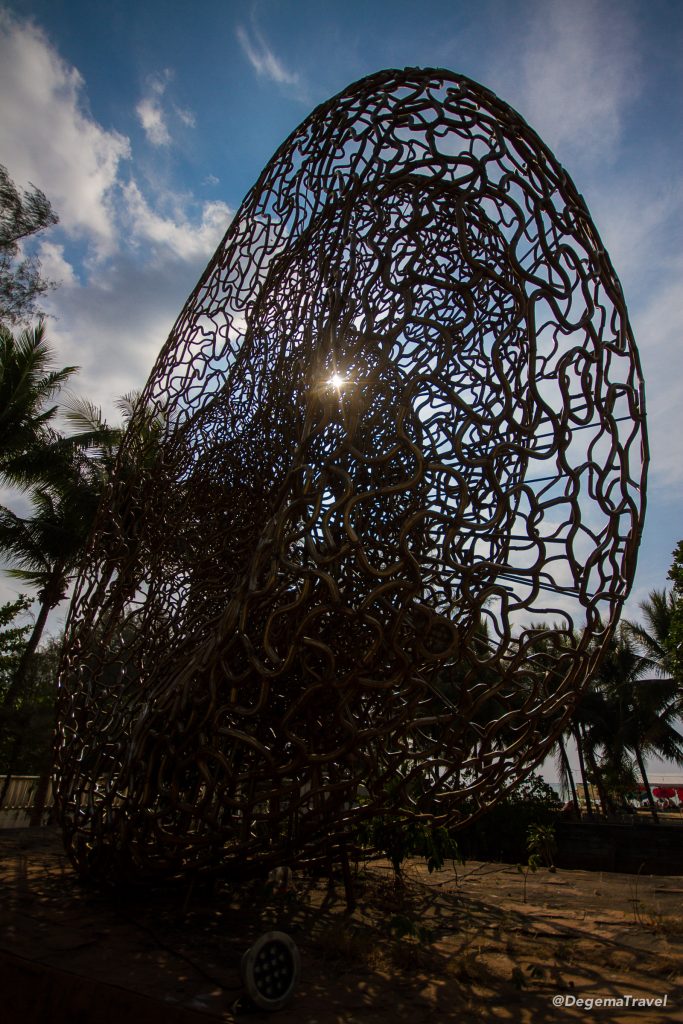 When it came to Week 12 of my Project52 and the theme (or style) of “Silhouette”, I returned to an idea I’d actually had during Week 4, when the theme was “Shadow”. As I said at the time, I’d actually had a number of perfectly good ideas, but either never had the gear with me or lacked the time/inclination to go out and photograph them.

The idea I’d had was for light streaming through the remarkable Phuket Tsumani Memorial in Kamala Beach. With a slight adjustment, the idea served just as well for a silhouette shot. I also had the opportunity to photograph it readily to hand since I was taking a tour up the west coast of the island for work, grabbing a few random shots I’d been lacking for a while, getting some fresh beach pictures and doing a bit or research as well. A brief stop at the memorial was very easy.

Ironically, the other thing I’d said in Week 4’s article was that I could have used a silhouette shot of a model I was shooting that week, but I chose not to because I felt it was unfair to use a silhouette as a shadow and then have a second silhouette shot later in the year. The reason why this is ironic is that I shot the same model – Angelica Chebotar – this very week! However, despite the opportunity, I failed to get any silhouette shots. I had planned to take and use one, but it slipped my mind during the course of the shoot.

The Phuket Tsunami Memorial is quite a striking sculpture, though in my opinion, it is too abstract. The first time I saw it, I was surprised that this was how the local authorities had decided to remember the hundreds of locals and tourists killed on that fateful day – 26th December 2004. It is such a defining moment in local history and remains the most commonly Googled phrase related to the island, and yet the memorial looks for all the world like a giant, warped bath sponge. Perhaps my lack of appreciation for contemporary art has something to do with it. Perhaps that says more about my lack of imagination than it says about the local authorities. Perhaps this is a reflection of the Buddhist attitude to life and death, which differs so radically from the Western perspective. Who knows?

And yet, perhaps an abstract piece is more appropriate? I still remember hearing about that disaster on Boxing Day, 12 years ago. I had already visited Phuket at least once by that time, so it had some relevance to me, and yet the sheer scale of the casualty figures and the scenes of utter devastation and death were beyond my comprehension. The one thing I could relate to – bringing it right down to a personal level – was hearing that one Thai woman had been killed at Le Méridien Phuket Beach Resort, where I had previously stayed. The story I heard was that everyone had survived the initial wave, but this one woman had gone out to the buildings by the beach afterwards and was taken out by the following wave.

I was also exceptionally frustrated by the newsreaders constantly referring to the island as “Foo-ket” or variations of the same. Apparently none of the [many] reporters on the ground had thought to ask a local for the correct pronunciation and then pass that information back to head office!

The explanation on the memorial’s plinth is written in Thai and [broken] English and reads as follows:

“Natural disaster is caused by a shift of nature to obtain equilibrium of the earth. Motions and forces of nature are inseparable. Its dynamism includes connecting, flowing, and changing things ranging from atomic structure, physical chemistry, human behavior, to inner universe as a cycle of life linking everything to everyone. Based on the theory of substance, I create a sculpture memorial using lines in the form of sphere connect the inner oval that represent the axis and the rotation of the world around itself and the sun in relevant to magnetic fields in the universe. Inside the circle, there are layers of forms which are interlinked. I use wave lines to present what people called Tsunami Disaster. Everything happens for a reason (Ituppujjayata) even loss of lives or others. At last, something rises to replace that loss. [sic]”

By 15th January 2005, the human cost of the tsunami in Phuket Province alone was reported as 260 dead, a further 1,111 injured and 646 more reported missing. In total, the disaster claimed an estimated 230,000 to 280,000 dead across Asia and Africa, with many more missing and injured.

When it came to actually taking this Project52 picture, I’d been surprised to find at least three and possibly as many as five Thai photographers at work within about a 100m radius of it, all with local models. Some appeared to be pre-wedding shoots while others could have been product shoots. It surprised me because I have never particularly considered Kamala to be that attractive a location, least of all the area immediately around the memorial. Perhaps they know something that I don’t?

I was a little disappointed with this shot. I was slightly limited by only having one lens on me – the wide-angle – and it was perhaps a little early in the day, too, taking my picture around 3:30pm, in the middle of the afternoon. The position of the sun forced me to use an angle which did not create the best silhouette. Also, the park around the memorial is rather scrubby and didn’t make the best backdrop, though I accept that is beyond my control. I would have much preferred to have used a shot of Angelica but, as I said, circumstances dictated that this was not to be, as will be revealed in the shoot write-up (if I ever get caught up enough to write it!).