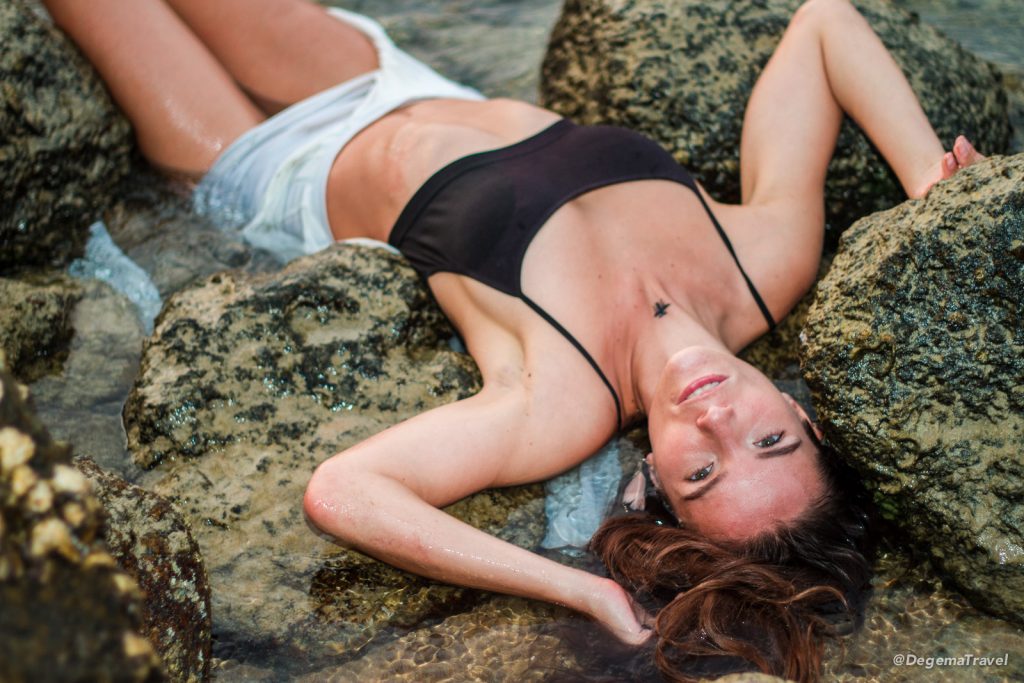 This is the first time where I have the opportunity to combine a Project52 write-up with a model shoot write-up! As it happened, several of the shots I took during the shoot coincided with the theme of the week – Texture – so all I had to do was pick the one I thought said it best. Some would call that laziness and a cop-out. I call it “efficient”.

On the downside, this picture is from my sixth shoot concept of the year, so it goes without saying that I’ve got an awful lot of catching up to do!

The model, in this case, was found on ModelMayhem.com. In actual fact, it was she who found me, messaging me out of the blue and asking if I’d be interested in working with her. She outlined her fees, adding that she is a professional make-up artist so I would not need to hire one specially for the shoot, and provided further contact details and examples of her work.

I have to admit that one of my initial big obstacles when it came to entering model photography was how to find models. In that regard, ModelMayhem has been a huge help, not least because this was the third model who actually reached out to me. Curiously enough, every single one of them has been Russian, but I have no objections to that. The two that I did end up working with were both stunningly beautiful and highly professional and a great pleasure to work with. The only reason I didn’t work with the third was because she was in the wrong country.

The model this time was Ayya Azanova, who has a lot of professional modelling experience working in Milan and across Asia. She told me that she has lived in Thailand, on and off, for many years – I believe she said eight, in total, but it might have been more – in Koh Samui, Bangkok and now in Phuket.

The organisation for this shoot probably didn’t need to be as rushed as it ended up being. Ayya was very keen to get cracking and I do enjoy shooting a lot, but the plan was kind of vague as a result of being organised so quickly. We agreed to a fashion shoot on a beach location. I picked Karon Beach, it being one of my favourites and having a nice rocky bit right at the southern end. It was also realistically reachable within the time available between my finishing work and sunset. We had considered shooting at Phromthep Cape, but I couldn’t realistically get there with enough time left before the light failed.

So, cometh the hour and we meet at a café on Karon Beach and I drive us to the location on my little moped. It was a little bit busy, as it always is right at that end of the sand, but there was still plenty of space for us to shoot in relative peace. There was one guy snapping away with his iPhone while we were working, so doubtless there are a few extra pics of Ayya up on Facebook somewhere.

Ayya provided the dresses and I barely knew what to expect before arriving. This early in my model shooting endeavours, I tend to give the models a lot of freedom with regards to the look and style. I theorise that, in most cases, they will be working to fulfil the requirements of the photographer and their clients, so will not have the opportunity to shoot what they personally would like to shoot. That’s why I always give them the option, with Ayya in particular responding with enthusiasm at the chance to shoot in a couple of dresses she’d wanted to use for a while.

I certainly couldn’t fault her selection. The first was a long, classic-style dress which made her look a bit like a shipwreck victim from the age of sail! It looked perfect for the rock beach and the sunset glow. Although I had some difficulty shooting directly against the sun because the light was too strong, the shots where I shot with the light coming from one side worked very well and could easily have ended up being the Project52 shot.

The second outfit featured a white skirt with several floor-length panels, which worked really well as Ayya was not afraid to get it wet. In fact, she practically dived right into the water! We found a little rock pool, which provided the perfect setting for the shot which did become Week 11’s picture.

The highly textured surface of the rock really emphasised the smooth, soft texture of Ayya’s skin, which was so utterly perfect as to require absolutely zero Photoshopping or even make-up! The only editing I did was messing around with the colours a little bit in Adobe Lightroom. The fact that the wet rocks also caught the light from the flash – which, for once, wasn’t playing up – was a bonus extra as it further brought out the texture.

The shoot continued, with Ayya donning a black net dress, then some baggy trousers and finally a sort of oversized bikini-type thing. At each stage, she was more than willing to find a patch of water to splash in, except with the trousers where she instead was climbing up on the rocks with remarkable skill. It turns out that rock-climbing is a hobby of hers!

In total, over the course of about two hours, I took 190 pictures of which about 100 worked pretty well and 24 were immediately processed and published on Flickr right here. It was a highly enjoyable shoot and I’m looking forward to working with Ayya more in the future.