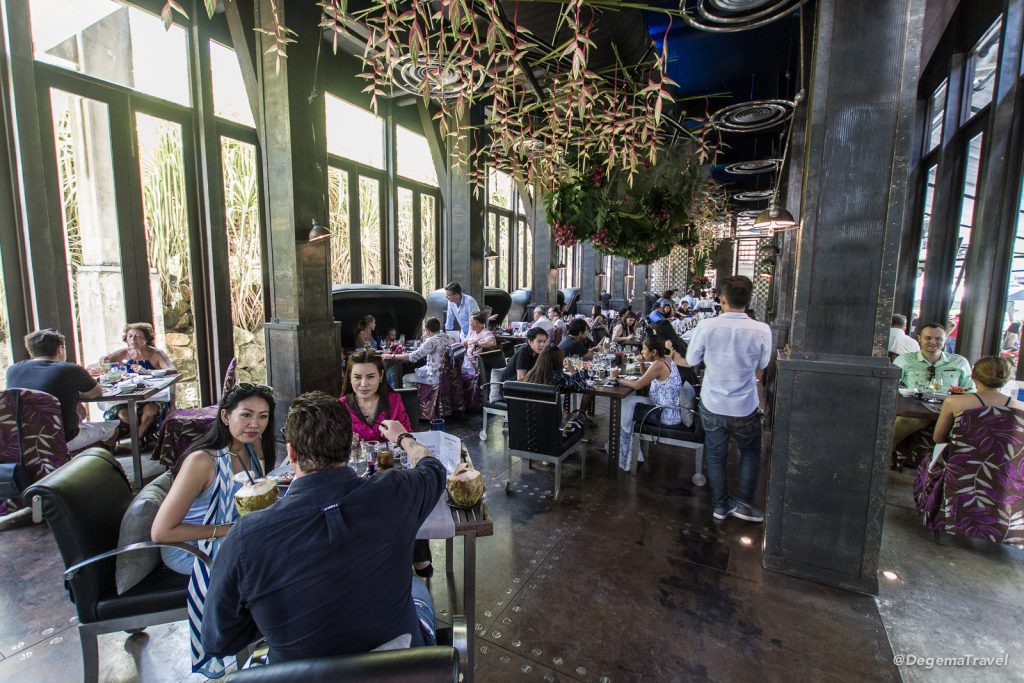 Reviewed on 18th March 2018. Details may become inaccurate over time.

As you can tell from the date shown above, this review is long overdue – nearly a month so! A lot came up between then and now, but The Slate’s Sunday Brunch remains worthy of note, which is why I’ve come back to it now.

I’m not normally one for big Sunday Brunch events. I tend to be either too busy or too lazy, particularly as Sunday is usually my day for playing airsoft. I’ve tried several of the best brunches around Phuket in the course of my full-time work, but it’s not generally something I seek out in my leisure time. The Slate’s offering, I’m happy to admit, was well worth the sacrifice of my valuable free time.

Let’s start with the bad news – the location of The Slate is a bit awkward. It’s convenient for Phuket International Airport and the nearby Nai Yang Beach which, while the sand there is perhaps a little on the grainy side, is a lovely natural place which is especially popular with locals. However, the hotel is nearly an hour’s drive from Patong, Phuket Town and other major tourist centres on Phuket. As one of my recent posts illustrated very effectively, I live pretty far from the airport, too.

Once you’ve reached The Slate, it is an outstanding resort. So-named because it was built in a former mine (I presume it was a slate mine, but I’m not certain about that detail), the décor and design skilfully combine nature and industrial chic. It’s a style I’m rather fond of, which probably explains my passion for urbex.

The brunch is held in one of the hotel’s seven dining outlets: Rivet, which is roughly in the centre of the resort, by the main pool. Despite the very industrial décor, the walls being studded with rivets and the fact that the upstairs lounge is named Rebar (short for reinforcing bar), the hotel staff insist on pronouncing the name as “rivette”, giving it a kind of French twist at the end. Pronunciation aside, Rivet continues the quite classy style of the rest of the resort and is very comfortable, despite its rugged look.

As I said above, I’ve been fortunate enough to try many of the finest Sunday brunches around Phuket over the past few years. I’m not going to make some bombastic and unbelievable statement that The Slate Sunday Brunch stands out from them all, but I will say that it stands alongside them as among the best available.

The key factor in a buffet brunch is the quality of the ingredients. Feeding so many people for a fixed price, I can understand the temptation to use cheaper ingredients to maximise profits. However, the really good places (The Slate included) choose instead to focus on ensuring a positive experience for their customers.

The result is a spread which starts with warm bread buns, crisp salad greens, excellent European cheeses (which are really expensive in Thailand, incidentally) and cold cuts and various pâtés and foies gras. Next comes fresh fish, mussels, prawns and live lobsters, all on ice with a slowly melting ice sculpture. Next is a Thai food station, with a local chef making fresh somtam. After that is a carnivore’s delight, with four meaty cuts cooked to taste, with a choice of tasty sauces. The last of the savouries is curry and kebab station, which is usually operated by an Indian chef, but he was on holiday when we were visiting. There’s also a cocktail bar and good choice of desserts.

When it comes to reviewing a good Sunday Brunch, I naturally want to try a little bit of everything, so I started on the left and worked my way all the way to the right. First round was a bread roll, a bit of salad, a couple of imported oysters, some cheese and biscuits. Round 2 cold cuts, foie gras, sushi and sashimi. Round 3 was half a lobster, a couple of mussels and a prawn, all grilled. I skipped the Thai food because I’m not that fond of somtam, so Round 4 was a big ribeye steak with a bit of spinach, potatoes and mange tout. Round 5 (getting rather full by now) was a bit of kebab meat, some naan bread, a small wrap and a bit of Butter Chicken with pilau rice. Finally, Round 6 was a chocolate mousse in a dark chocolate boat and a…thing. Not sure what it was – some kind of meringue, I think.

Each course was excellent, though it was not without its faults. I personally find grilled lobster to be a bit lacking in flavour and much prefer it with Thermidor sauce. The kebab wasn’t really presented as a proper kebab. That’s all, and they’re frankly rather weak complaints. The entire meal was extremely filling (somewhat over-filling actually) and the flavours were robust and delightful. The preparations were extremely simple – they let the ingredients do the talking for them and, being the finest ingredients available, they had a lot to say.

With the cost starting at 2,450 baht per person (with free-flow soft drinks), The Slate Sunday Brunch isn’t cheap, though it’s not the most expensive on Phuket. As usual, the prices increase when you add free-flow wine (3,450 baht per person) or Piper-Heidsieck Champagne (6,050 baht per person). Being a press invitational, we naturally didn’t pay a penny. It also meant that the atmosphere was like a networking event, which is why I didn’t do my usual section of the ambience.

Is it worth the cost, as well as the lengthy drive up to Nai Yang Beach? Obviously that comes down to your definition of what is and is not “expensive”. For me, nearly £50 is a bit pricey. I maybe wouldn’t head there every Sunday for a casual meal. As I said at the start, though, I’m not one of the typical brunching crowd. For those who are, I think this would be a very good option and excellent value for money. For me, if it was a special occasion or I particularly wanted to enjoy some great food, I could easily justify that cost.

As it says in the text, my girlfriend and I were invited to the media launch of this brunch and we did not pay for the meal. A friend of ours works for The Slate and extended the invitation to us, despite my making it clear that I could not promise any kind of publicity. I didn’t even promise her that I would do this review for my blog. As such, there is no expectation of a positive review, though there is the factor that a negative review may have had an impact on that friendship. Even so, I have remained loyal to my ethical standards and this review is an honest one.