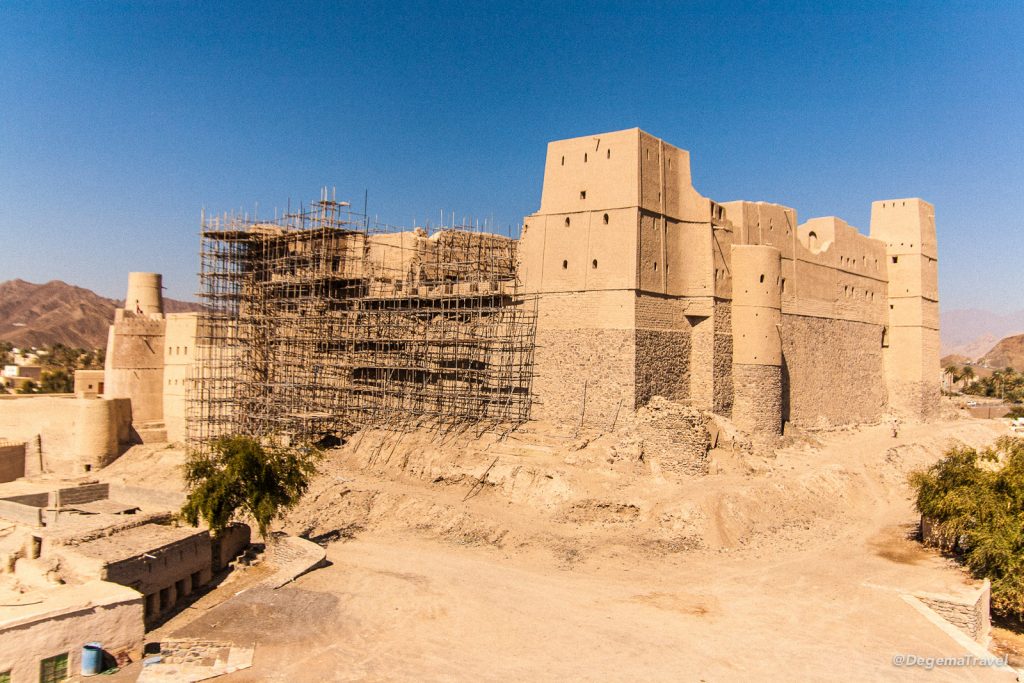 The Last Ride of Lady Macbeth

I owned my 1997 Jeep Grand Cherokee Laredo for a grand total of 306 days, of which I estimate that she was on the road for maybe half. In spite of that relatively short ownership and my limited time driving, I still miss the old girl to this day. We had some…interesting adventures together, among the best of them being her final voyage.

I mentioned in the previous post about Lady Macbeth that I used to use CouchSurfing as a way to meet fellow travellers, one of whom had only 45 minutes to see the best that Muscat had to offer. A later visitor had a little more time on her hands. Sina was a young German girl – about 19 at the time of our meeting, on 27th January 2011. She wanted to see something of the interior of Oman as was looking for a guide with a car. Having little better to do that weekend, I willingly volunteered.

I collecting Sina from her previous hosts at about 8am. That’s not actually as simple a task as it may seem. This was before Google Maps and inexpensive GPS receivers were widely available. There was only one map of Muscat you could buy and I worked for the company that produced it. Rumour had it that it was intentionally poorly scaled because the law said it had to be, as the government was paranoid about giving useful intelligence to potential invaders. Having loaded Sina’s bags into the Jeep’s capacious boot, we headed off towards Nizwa.

I’d already visited the main in-country town several times, by this point. The road there was one of the more enjoyable to drive, particularly where it crossed the wadi at Fanja. Sadly, it’s a view I never stopped to photograph, though I remember it vividly. I was going to point it out to Sina, but I looked across and found her fast asleep in the passenger seat, so I left her to her slumber.

Nizwa itself is famous for its fort, which we stopped at to look around. There’s an interesting point about this one of about 500 or so forts, castles and towers in Oman, which was explained to me by an archaeologist I interviewed for a feature about the country’s fortifications. Unlike the majority of the others, Nizwa Fort was not designed to defend the town. The wide tower is in a strategically dreadful place on the valley floor, in the heart of the town. As tall as it is, a besieging army could quite easily position a few cannons on the nearby high hills and lob shots right into courtyard, inflicting heavy casualties. It was never meant to defend the people of Nizwa. It was meant to dominate them.

Shooting Through the Souk

The two major accessories of the traditional dress of Oman are the khanjar – a curved dagger, warn like a belt buckle – and a rifle, historically of British manufacture. Photos of the Sultan and his court during their annual “Meet the People” tour always showed most of them carrying M16s, though rarely HM Sultan Qaboos himself. The stores in the souk catered to lovers of the classics, with disarmed Martini-Henry or Lee-Enfield rifles lining the walls. For rather obvious reasons, these accessories are reserved for very special occasions, not day-to-day wear.

From Nizwa, we continued inland to Bahla. The fort here was Oman’s first UNESCO World Heritage Site, added to the list in 1987. It’s a striking structure, again dominating the town, though this time from a slightly better defensive position. I hadn’t previously explored this particular site, so I took more interest in looking around than I had at Nizwa. Unfortunately, at the time, the fort was still undergoing renovations and was not open to the public, so I have photos only of the exterior and some of the abandoned buildings nearby.

My interesting fact about Bahla Fort comes from my archaeologist friend again. He informed me, rather bluntly and bitterly, that the fort very nearly lost its UNESCO status because those tasked with restoring the structure had used modern cement and made little or no attempt to conceal the fact. I remember seeing this sort of half-baked approach to preservation in other forts around the country, too.

We took a slightly scenic route back to Nizwa, going off the main road and hugging the Hajar Mountains. Navigating more by dead reckoning than maps, we traversed narrow, winding roads through some tiny villages before getting even more into the sticks. Eventually, we left the tarmac behind and made some progress up the foothills of the mountain range on dirt tracks.

What I was actually aiming for was the village of Tanuf or, at least, what’s left of it. It was bombed to rubble by the British Royal Air Force during the Jebel Akhdar War of 1954 to 1959. Astoundingly, details like wooden door frames still endure, despite over half a century of disuse. It makes for quite a spooky place to explore.

The Death of Lady Macbeth

Is was about 2pm when we left Tanuf and, both being pretty tired by this point, we headed back to Muscat. I’d agreed to drop Sina off at the house of her next hosts who, by curious coincidence, were colleagues and good friends of mine. We were only a few miles away when the dashboard suddenly made an unusual jingle. I looked down to see the “CHECK GAUGES” light was on. I checked each one: I still had over half a tank of fuel and the oil and water temperatures were ok, but the battery gauge was dead.

“Ah,” I said aloud. “I think the alternator’s broken.” I think that’s what I said, but I suspect there were really a few more expletives. I quickly switched off the radio and anything else I could find which would draw power from the battery and I hoped for the best. It’s a very good thing we weren’t that far from my friends’ apartment, so I was able to safely drop Sina off.

I left rather abruptly, desperately wanting to get the ailing Lady back to my own apartment building so I could park her out of the way. It would make getting her onto the recovery truck (again) easier. Despite the drain on power it would cause, I had the radio on for some of the journey home, just to ease my nerves. I switched it off again when the power started to fail and the singer started to slur his words.

I made it back safely, thankfully, but Lady Macbeth would never again move under her own power and my ownership. During said ownership, she had covered 5,375 miles, with a total of 191,250 miles on the clock when I switched off the ignition for the last time at about 3:52pm. She’s got one last story in her, but that will have to wait for another day.