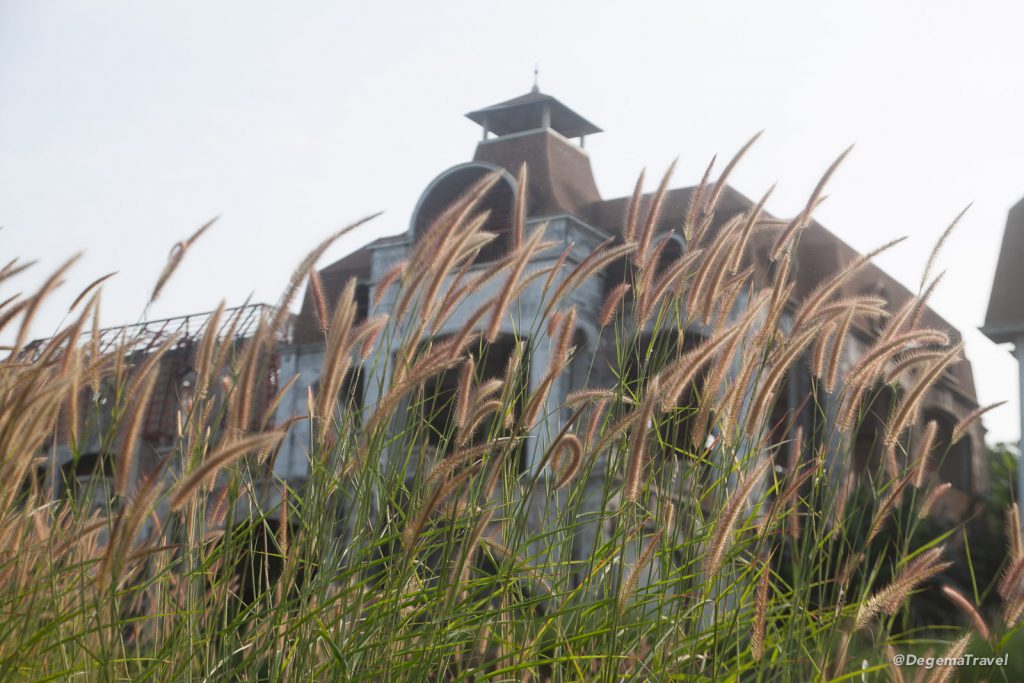 The Emerald Bang Rong Phuket is the place which started off my fascination with abandoned buildings in Phuket and Thailand generally. Known as the “ghost hotel” to Geocachers – which is how I came across the place, being one myself – it has a fantastic location and is well-enough completed to be fairly safe to explore.

Located a short distance from the fisherman’s pier at Ao Por, the resort is rather remote. I found it by looking for the geocache placed there by Phuket-based photoblogger Oilinki. Once I had discovered and explored the place, I wanted to try a model shoot in such a setting, but realised that no sane model would travel to such a remote location. This led to my urge to find other similar locations in more accessible places, which then snowballed into the Paradise Abandoned project.

The shells of chalets, a grand lobby, a pool and seaview rooms, all in a blend of Thai and old European style, stand dormant, half-completed and abandoned to the elements. The construction reached a safe stage for those wishing to walk among the faintly spooky skeleton of an ambitious but over-reaching tourism venture. The staircases are completed, as are the balconies and the basic shells of rooms.

There are certain things which are notably absent. Purely from a safety perspective, the absence of guard rails on the stairs, balconies and walkways mean that you do need to be careful of where you are walking. From an aesthetic perspective, the rooms were never properly fitted and empty shells make rather boring settings. The beachfront bungalows are in the process of being absorbed by the jungle, which does make them a little more interesting and exciting.

Somehow, the lack of guard rails makes walking around the edifice quite nerve-wracking, like you’re going somewhere you clearly shouldn’t be (which, in fairness, is probably true). Visiting the area close to dusk just adds to that haunted feeling, as does the absolute silence. If you are going to visit at such a time, a light source is advisable and proper footwear (boots or shoes) is strongly recommended at any time due to the obvious hazards presented by decaying construction materials and broken glass.

The Emerald Bang Rong Phuket is well off the beaten track, which means that it has never become a hangout for bored youths. There is little or no graffiti to be seen and it is very rare that you will run into any other people there. To reach it, you have to go towards the northeast corner of Phuket, which is already home to relatively little of interest to the average tourist. You then have to drive past the entrance to the Ao Por Grand Pier, then past the smaller fishing pier, down a single-lane road, onto a barely-metalled road and over some quite steep hills and dips. The hotel is not guarded or fenced. It is entirely open for exploration, with the only obstacle being the fact that so few people know it even exists. Even expatriates who have lived on the island for decades have never heard of it!

Recommend: Boots and a torch.
Avoid: Falling to your death from an unguarded third-floor balcony.