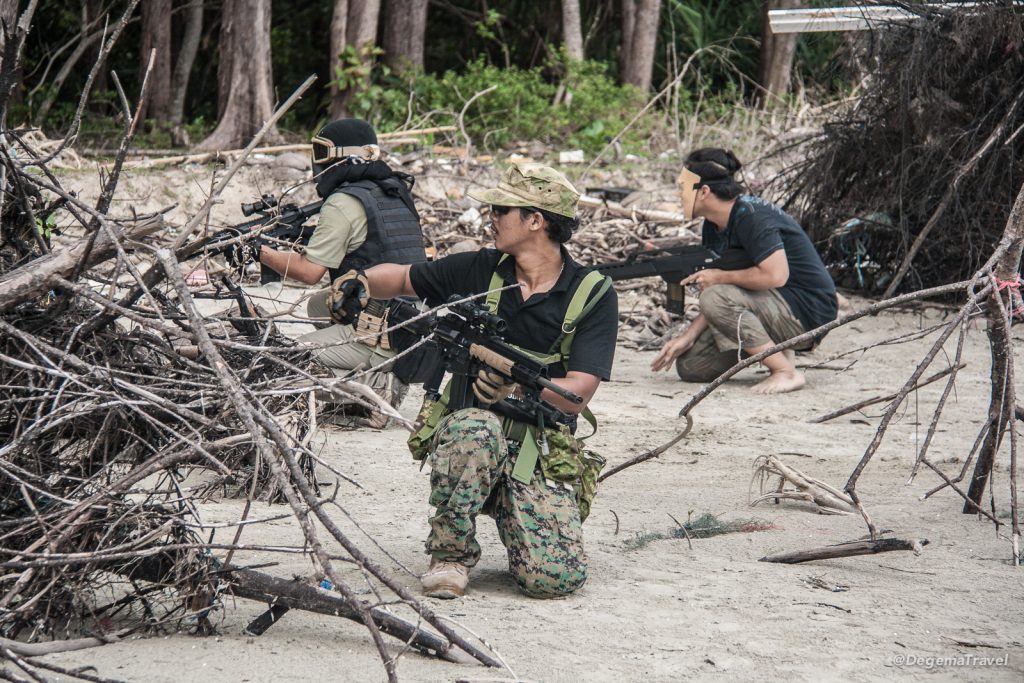 The Battle of Thung Thale Beach

Keeping low and moving slow, rifle firmly gripped in both gloved hands, I crept through a patch of dense woodland. I was shielded from the harsh sunlight and the view of most of the enemy invasion force by a wall of leaves, but the web of thin trunks and branches I was creeping through presented challenges of its own, particularly when it came to moving quietly. My squadmate joined me, silently indicating that we should move further to the left. The enemy were reportedly moving up through this area and, if we were careful, we would be able to attack on their exposed flank.

The further left we moved, the more obstructions we encountered, with the trees getting thicker and closer together, presenting us with an impenetrable wall of wood. My goggles were steaming up from the intense jungle heat and finding somewhere to put my foot down which wouldn’t make a loud noise was getting harder and harder. Finally, we found an area where our only obstacle was a very large, swampy puddle. Still an unpleasant option, I shrugged at the questioning glance my colleague threw me. He gestured me to take the lead and, as soundlessly as possible, I moved through the soft, wet ground. On the bright side, at least the enemy would not expect us to be here!

Emerging onto firmer ground, my eyes were drawn to movement to my right. The sun was silhouetting three armed figures, moving inland from the beach. I instantly dropped to a knee, bringing my rifle to my shoulder. Remembering that my weapon had a slight tendency to pull to the right, I adjusted my aim along the iron sights, flicked the safety catch to single-shot mode, and rapidly pumped the trigger. My squadmate joined in, spraying fully automatic fire into the hostile team. It was only after the chaos and confusion had abated and all targets had been downed that we discovered that the three troopers were actually from our own team.

Even so, they were able to have a good laugh about it on their walk back to the spawn zone.

​​No, I’m not trying my hand at some creative writing – all of this actually happened to me last Saturday. I was in the Mu Koh Lanta National Park in the Krabi Province of Thailand for an airsoft event – a ‘milsim’, or military simulation. The simulated situation was that a hostile force had landed on the nearby Thung Thale Beach and our team had to prevent them from advancing inland. Each team had about 20-25 members, all decked out in their best military gear and toting a wide array of replica weaponry.

Airsoft is quite a niche sport, with an enthusiastic but modest following. This is not an airsoft blog and I don’t propose to bore those who are here for travel stories with the fine details of equipment loadouts, tactics and blow-by-blow accounts of each match from the two-day event. However, the milsim is definitely worthy of note as a rather unique travel and expatriate experience. It also gave me a renewed sympathy and respect for those who have to fight in jungles because that is seriously intense!

​​For the sake of the few of you who are interested, my gear loadout was fairly modest. I’m still new to the sport and haven’t even bought my own weapon yet, so I was renting a replica Heckler & Koch HK416 from my friends at Phuket Airsoft Club. Of my own kit, I had my British Army surplus Soldier 95 DPM trousers, a shemagh and a belt kit made up of four PLCE water canteen pouches. My jacket and hat are both kind of symbolic for me, the former having flags sewn on the arm for each country I’ve lived in while the latter is worn in the fashion of the Chindits, as an act of remembrance for my granddad. The four pouches contained a 1L canteen of water, a multitool, my old Canon 400D camera body, a cheap Canon zoom lens, a high-visibility vest (so that I have a fighting chance of not getting shot while taking pictures on the battlefield), spare memory cards for the camera and two spare high-capacity magazines of BBs for the rifle.

Alone in a Crowd

The somewhat novel thing about my involvement in airsoft in Thailand is that I am one of an extremely small minority of foreigners who play the sport here, particularly in Southern Thailand. Bangkok, with its larger and more varied expat community, has quite a few foreign players. Down here, however, I’m the only regular non-Thai player at Phuket Airsoft Club. There a couple of others who regularly spend large parts of the year in Phuket as long-term visitors, one of whom – Paul, an Aussie ex-soldier with some fascinating travel stories of his own – joined us on the milsim.

Another quirk of airsoft in Thailand is that it is one of the cheaper and more accessible sports in the country, so you end up with a lot of young men from working-class backgrounds playing, not a great many of whom can speak that much English. Naturally, as the guest in this country, I consider that to be my failing for not learning enough Thai rather than theirs for not learning English, but it does make things a little challenging. For one thing, it means that almost all marketing for airsoft clubs, shops and events is written only in Thai – and in the sort of colloquial Thai which Google Translate takes one look at and blanches, spewing out some garbled nonsense of a translation which is entirely incomprehensible.

In spite of this, the guys I fight alongside and against could not be nicer if they tried. They make every possible effort to make folks like Paul and me feel included and welcome. They create such a fun and friendly atmosphere and, even though I can generally barely understand what they’re saying, playing and partying with them is always a blast. They did anything they could to help, from giving us a lift on the five-hour drive to the milsim from Phuket (and back) to helping us put up our tents to providing a fantastic barbecue dinner to explaining the rules of the drinking games we got roped into. I’m still not totally sure how it was supposed to work, but it involved a ping-pong ball, a blindfold and a lot of laughing. Naturally, we contributed towards the cost of fuel, food and booze, as did everyone.

I should mention that this relationship isn’t entirely one-sided. According to Ken – the owner of Phuket Airsoft Club, who speaks pretty good English – the regular players now really look forward to the days when I play. They love seeing the pictures I take and many a Facebook profile or cover picture now carries my watermark.

The area of the milsim itself was very picturesque; a verdant forested area, but with reasonably good roads through it and a few buildings and facilities for a campsite. A word to the wise: bring a hammock. The trees are close enough to string one up and it gets you away from the ants when you’re relaxing during the day. Tents appear to be available from the park wardens (I’m not totally sure how that works. It was one of the things which was never really explained. We just showed up and were presented with tents), but the ablutions block is all Thai-style, with squat toilets and buckets of cold water to wash yourself with.

One slight disappointment is the beach. Quite aside from the fact that it is not really of the soft-white-sand variety Thailand is famous for (more a sort of dirty grey-brown), it is also covered in rubbish to a frankly amazing extent for a place with so few visitors. I suspect that a lot of it is washed in from the sea (except for the thousands of BBs now littering the area, which I’ll admit to being at least partially responsible for. However, biodegradable BBs are in quite wide use in the airsoft community). Most of it consists of plastic water bottles and polystyrene, which a few elderly folks with pushcarts could be seen collecting (particularly the bottles because they can cash them in at recycling facilities).

Most memorably for me, the park is home to plenty of wildlife. Naturally, most of it stayed well clear of the 50-60 noisy, heavily armed visitors, but the giant eagles still soared above us. One of the most vivid memories of the milsim for me was driving back from the final battle. There I was, sitting on the open tailgate of a heavily laden pick-up truck, surrounded by my new friends and comrades, watching a second vehicle trailing us along the beach a couple of hundred metres behind, equally overloaded with battle weary buddies. A big sea eagle swooped down between us, plucking some morsel off the sand before flapping back into a clear blue sky. For some reason, exhausted, bruised and caked in mud, sweat and sand as I was, that image made me smile. It’s one of those “this certainly wasn’t in my five-year plan” moments which I live for.