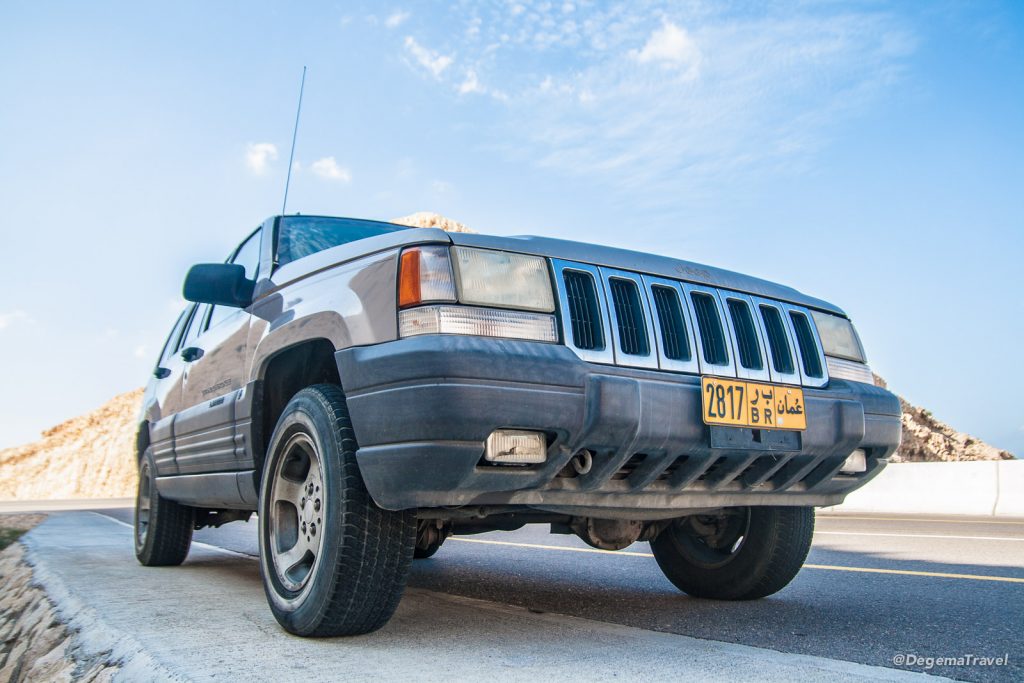 The Adventures of Lady Macbeth

At the time of writing, I have only ever owned one car. As you would expect of a first vehicle, it was a bit of a scrapper – ageing, prone to breakdowns and with enough miles on the clock for it to have driven half-way to the moon. What is a little more unusual for a first foray into being a motorist is that it was a Jeep Grand Cherokee.

To be precise, the Lady was a silver 1997 Jeep Grand Cherokee Laredo with just under 186,000 miles behind her 4.0-litre engine. I bought her for 1,000 Omani rials (which was about £1,600 at the time) from a Scottish oil worker who was leaving the country. I won’t deny that I christened her Lady Macbeth to [try to] be cool. I had recently finished reading the Night’s Dawn trilogy by Peter F. Hamilton, in which the starship of the main character is also named Lady Macbeth. Unlike the books, however, mine lived up to her name in all the wrong ways!

Living on a Prayer

My search for a car began after I realised that being without one in Oman was an absolute nightmare. Taxi drivers seemed to take delight in overcharging me for every journey (that’s a tale in itself, but one for another day), there is absolutely no public transport in the country and the photographers we hapless (and carless) writers were sent out with had a nasty habit of leaving us out in the field to go on to their next assignment, meaning we had to struggle back to the office, often at our own considerable expense and discomfort.

They also had some peculiar and rather off-putting driving habits. One would rub a rosary hanging from the rearview mirror and cross himself before setting off, then would continue to do so at intervals throughout the journey. Another would mutter prayers to himself the whole way, but I later learnt that his parents were both killed in a car accident, which kind of explains that. As much as I liked our photography department and very much appreciated them driving me to my assignments, stuff like this was kind of disconcerting.

​​What finally settled it, however, and really pushed my search for a car into top gear, was the day I was sent on assignment to Al Hoota Cave in the mountains around Nizwa, about a three-hour drive from Muscat. After a long and hard day, both the photographer and I were pretty tired and I was starting to drift off to sleep in the passenger seat. Unfortunately, the photographer was also starting to drift off in the driver’s seat. I will never forget to sickening lurch as he sudden snapped awake, realised he’d drifted into oncoming traffic and jerked the car back into the right lane at the last second. We stopped in Nizwa so he could buy some water to splash on his face, but there was certainly no threat of me falling asleep for the rest of that ride!

Among the company’s photographers, I always enjoyed being sent out with the head snapper, Herbet Fernandes. Aside from being an outstanding photographer, a great guy and a safe driver, he owned a Jeep Grand Cherokee. Riding in the passenger seat of that behemoth was like travelling around the city on a fluffy cloud – the upholstery was that soft! Not being much of a petrolhead, my driving motivation, when looking for a car, was comfort. I did want a 4×4 because I wanted to try my hand at some off-roading, but comfort was the first priority. As a result, I was looking first and foremost for second-hand Jeeps.

​​Unfortunately, the guy I bought Lady Macbeth off was rather a short Scottish oil worker. He was so short, in fact, that he couldn’t raise the seat far enough to be able to drive comfortably and safely, so he had taken it to an upholsters in Ruwi – the rather rough-and-ready bit of Muscat – and they did a very good job of stuffing the driver’s seat with some cheap, firm foam padding. As a result, my passengers could enjoy the decadent pleasure of the super-soft seats, but I couldn’t! Furthermore, being significantly taller than the previous owner, I had to have the seat reclined surprisingly far just so that I could fit into the car without hitting my head on the ceiling!

I said that Lady Macbeth lived up to her name in all the wrong ways. Well, firstly, she constantly needed cleaning! This is actually a source for concern in Oman since it is a crime to have a dirty car. The police will pull you over and escort you to the nearest car wash rather than let you drive around Muscat in a dirty car. Fortunately, there was a guy with a bucket and sponge in the company car park who would happily give any car a wash down for a couple of rials, so he got a couple out of me about once a week.

The second similarity to the leading lady of a certain Scottish play was a propensity to break down. I owned the car for a little less than a year and I think that she was on the road for only about half of that time! The first visit to a Ruwi mechanic was the result of dropping off a kerb in the Muttrah area of Muscat while driving back to the office from an assignment. I’d decided to take the more direct route out of the car park and the drop came as a bit of a surprise, but it was only about four inches – well within the car’s clearance. However, it wasn’t within the radiator system’s tolerances and, driving home that evening along one of the city’s main highways, the engine suddenly died, having overheated.

By pure good fortune, I was close to my turn-off when the engine cut out, so I was able to get out of danger and back home though a combination of coasting and very careful driving whenever I could get the engine started. The previous owner had given me the number of his favoured mechanic (which, in hindsight, should have been a warning sign) and, after about a week, my Jeep had a brand new second-hand Toyota Land Cruiser radiator matrix. This would be a common theme for Lady Macbeth since Jeep parts are not really that common in Oman.

The daft stories are far from over, so The Adventures of Lady Macbeth will return for a second part soon, including the tale of how I managed to bury her in a beach, hit a speed bump at about 100 km/h and nearly caused a head-on collision while overtaking a police car…all in one night!

One thought on “The Adventures of Lady Macbeth”