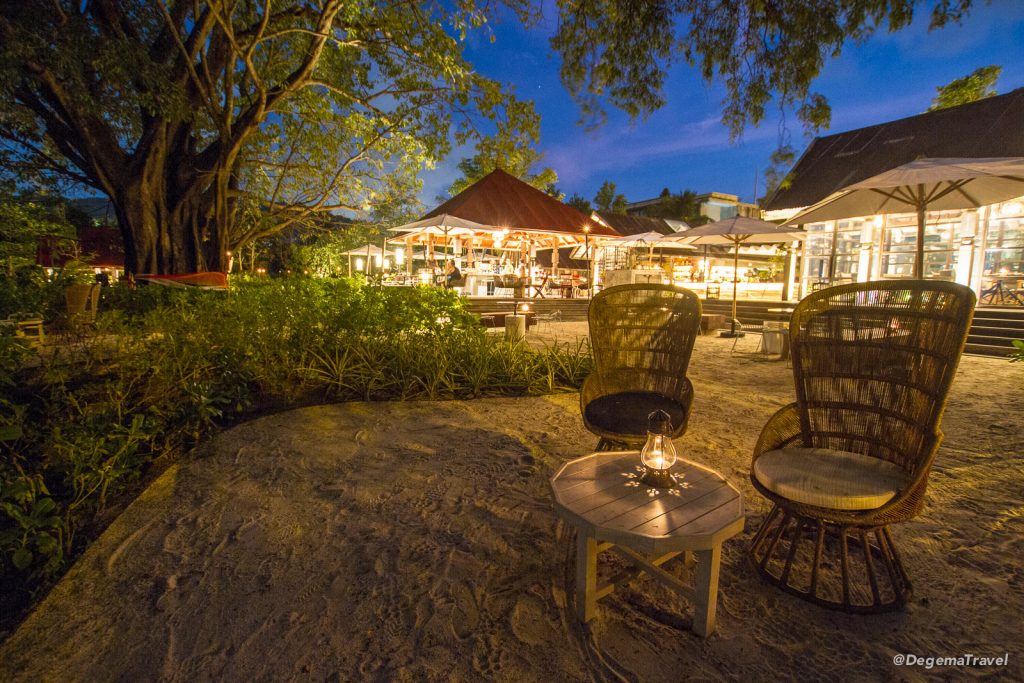 Reviewed on 9th January 2018. Details may become inaccurate over time.

I first reviewed the main dining outlet of the Rosewood Phuket resort for work. My ethics policy on this site prevented me from sharing the findings of that review here – that research and my experience on that evening is the property of my employers. However, this was one place I couldn’t wait to go back and try again. I took my girlfriend there on a date. She’s a chef and very particular about food quality, so this is about as great a challenge as you can set a restaurant.

The location is very important, when it comes to choosing a romantic restaurant in Phuket. The problem faced by Rosewood is that they want their hotel to be somewhere relatively peaceful and isolated, but their restaurant to be somewhere convenient. It’s an almost impossible balance to strike and, in all honesty, they seem to have erred more on the side of isolation. It’s close to Patong – Phuket’s most popular resort town – so it’s not that inconvenient, but the entrance to the restaurant is found at the end of quite a considerable drive over some substantial hills.

That’s not a point against them, though. The setting for Ta Khai Restaurant is one of the most beautiful and romantic around. It’s right by the sea, though not really on what you’d call a beach. Instead, you have mangrove-type trees and tropical plant life surrounding you. The cruise ships in Patong Bay light up the water in uniquely beautiful way, but most of the bright lights of Patong itself are hidden behind a headland. The seclusion gives you a real rural feeling, despite being about a 15-20 minute drive from one of Phuket’s busiest and noisiest towns.

For me, the location plays a major role in choosing a romantic restaurant in Phuket. However, for my girlfriend, it’s all about the food. Fortunately, Ta Khai Restaurant has it where it counts here. The open kitchen is helmed by Uncle Nun and Aunt Yai – a Thai couple who have been running restaurants together for over 30 years. They met in Yai’s hometown of Trang, in South Thailand. Nun prepared seafood fried rice for her and she was so enamoured of it (and him) that she asked to be shown how it was made. That led to a shared passion for cooking which has taken them all over Thailand, finally landing them in Phuket.

My girlfriend often talks about how passion always improves the flavour of food. Her own restaurant stands out among similar venues, in spite of being much smaller, because she has that passion herself. I understand what she means because you can see the same effect in other creative arts, too. She was delighted to find that the couple at Ta Khai Restaurant have it in spades.

We both had the premium set menu for 1,500 baht. Ala carte options are available, but I heartily recommend the premium set, which features fresh spring rolls and fried shrimp cakes for starter. The spring rolls are especially substantial and full of flavour and both dishes come with fantastic dipping sauces.

The next part of the meal is tom kha gai – a coconut soup with chicken. It had quite a powerful lemongrass-y flavour, and I was literally sighing with satisfaction after every spoonful (much to my girlfriend’s amusement). This came with a fish course of pla samlee thod yum mamuang (deep-fried cotton fish with green mango salad). I’m not normally a fan of Thai salads. Commonly referred to as “som tam”, I find that they’re usually sphincter-snappingly sour. This one, however, was a perfect balance of sweetness and sourness.

The main course of the Ta Khai Restaurant premium set is absolutely fantastic. There’s a sublimely tender and tasty moo hong (soy-braised pork belly) and the gaeng poo bai chaplu (crab curry with betel leaves) has the perfect amount of kick to it. It makes your lips tingle without melting your fillings, so the spiciness really adds to the flavour, instead of distracting from it. You have a choice of jasmine or brown rice with this part of the meal, and I recommend the brown stuff. Round it all off with some mango sticky rice and you have an absolutely divine Thai food banquet of an outstanding quality for a not-silly price.

I started describing the atmosphere at Ta Khai Restaurant before, saying it gives you a feeling of rural isolation. The term they had in mind while designing it was “rustic chic”, and it certainly hits that mark. The location is part of it, but the décor is spot-on, too. The various buildings – the kitchen, air-conditioned indoor dining room, separate dining pavilions and a couple of others – are all built from reclaimed materials. I was told that the hotel owners were literally driving through the Thai countryside one day, spotted a rusted old abandoned barn they liked the look of, bought it, built a brand new replacement structure for the farmer and used the old wood and metal to build the restaurant!

The other look they were going for is ‘fishing village’. The name ta khai translates as ‘fishing net’, and you’re invited to grab hold of one to pluck your own future meal out of the large pool in front of the kitchen. Being right by the sea, surrounded by ancient trees which the architects left in place and built the venue around certainly gives you that feeling like you’ve discovered some hidden local treasure.

I had one tiny issue with Ta Khai Restaurant. I’ve been there twice now and had a fantastic meal on both occasions. The food is fantastic, the service is outstanding, the prices aren’t unreasonable and the location is not really all that inconvenient. My one complaint is that I was offered drinking water as I was sitting down and, being rather thirsty, I accepted. It was only afterwards that I saw the menu and discovered that the water they had served me cost something like 700 baht per bottle! I didn’t appreciate being offered water before being told how much it cost, especially as I’d assumed it would be free.

That is my only criticism of the place. That is the absolute worst I can say of it. Everything else is amazing. It is, in my opinion, one of the most romantic restaurants in Phuket, serving some of the best Thai food on the island, and is well worth going out of your way to visit. I certainly will be again!

As with my review of Café de Paris Patong Beach, I have a working friendship with someone at Ta Khai Restaurant – the Marketing & Communications Manager for Rosewood Phuket. He and I are friends on Facebook, but my interactions with him have been mostly work-related (at time of writing). In spite of this, I have endeavoured to be as objective in my review as possible. While I was fed for free when I reviewed the venue for my day job, I received no special discounts or incentives on my second visit. I paid the cost of the meal with my own money and neither I nor my food and beverages were given any more special attention than that of the other diners that evening.