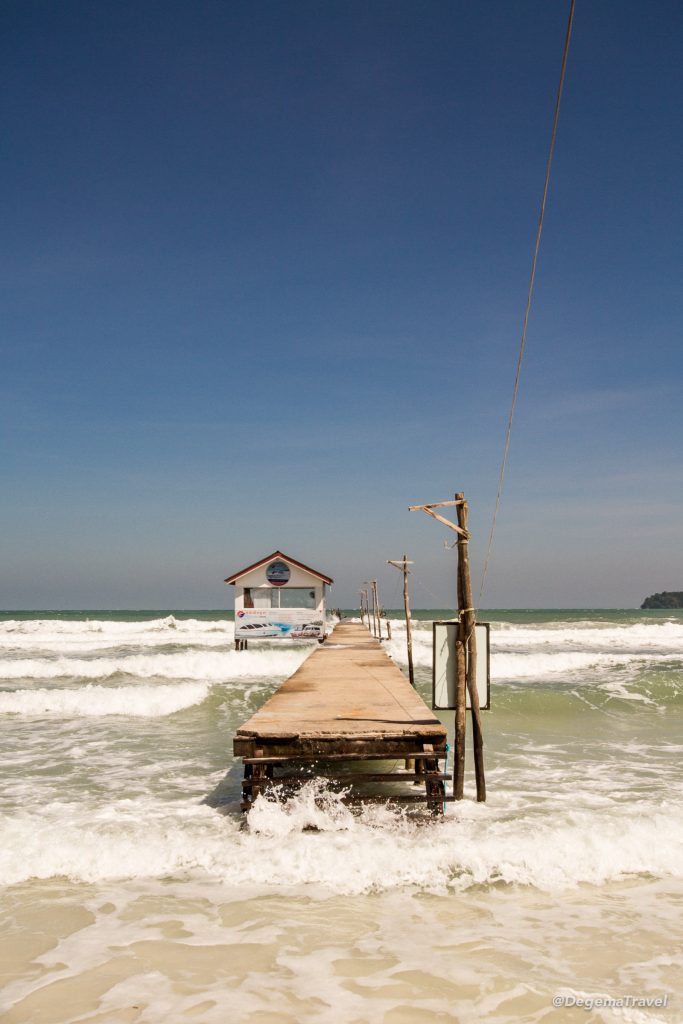 The story of my trip to Cambodia’s tropical islands at the start of December 2017 is not yet complete. In my previous post, I visited what you could generously call the ‘party island’ – Koh Rong. A short and surprisingly rough boat ride took me to its smaller neighbour, Koh Rong Sanloem.

Various online sources had told me to expect a much quieter atmosphere. Koh Rong Sanloem (or Samloem, among other spellings), they said, is more for the older folks looking for a relaxing break. Given that Tui Village was pretty tame, by my standards, I was expecting Saracen Bay to be virtually deserted. While there was a regular flow of people walking up and down the beach to and from the various widely spaced beach bungalow resorts, it was indeed a quiet and peaceful place.

Saracen Bay is the biggest and busiest beach on Koh Rong Sanloem. At about 2.75 km long, it isn’t the biggest in the archipelago. That title goes to Koh Rong’s creatively named “Long Beach”, which is also known as “7 km Beach” and, to the somewhat more imaginative locals, “Sok San Beach”. However, unlike its longer cousin, Saracen Bay is its island’s main transport hub, with five piers spaced along its length.

Also unlike Sok San Beach, Saracen Bay has fairly evenly spaced attractions, including several minimarts and quite an impressive range of restaurants, with at least three wood-fired brick pizza ovens to choose from. There were a couple of bars, but none attracted the same kind of crowds as the ones in Tui Village. Mostly, they were just used as WiFi hubs, especially by me when I discovered that my hotel was one of the few on the island which didn’t have guest internet access.

Given my now established indifference to beach holidays, you might be asking why I had decided to spend half of my holiday on Koh Rong Sanloem at all. The answer is a little absurd. I travelled hundreds of kilometres by plane, car and boat, just to see an abandoned lighthouse. Built while Cambodia was still a French protectorate, its light has long since been extinguished and replaced with modern navigational aids. However, the basic structure still stands and is accessible to those with an urban exploring bent, such as me.

Towards the end of my first day on Koh Rong Sanloem, I had a couple of beers at one of the bars along the beach from my hotel, mostly to use the internet. While there, I’d been chatting with the Cambodian barman. Paul was quite excited to talk to me when I told him that I work in the travel industry. He said he’s currently between jobs as a hotel operations manager. He certainly seemed to know his stuff and we had some interesting and wide-ranging conversations. This included me picking his brains about the two islands and especially the lighthouse. He gave me some rough directions and told me that it’s approximately a three-hour trek. That concerned me.

The following day, I woke early. I’ve made the mistake of attempting long uphill treks under the midday sun before and I’m determined to not repeat that experience. I stopped at one of the minimarts (the store of the aptly named “Mr Nice”) along the way to buy a couple of big bottles of water and then headed down the beach. Against my better judgement, I followed Paul’s directions.

Within a very short distance of the beach, what I believed was the track Paul had specified had headed into dense jungle. The trail became increasingly unclear, becoming nothing more than a vague gap in the undergrowth at several points. Stoically following my instincts and this feeble trail, I was sweltering in the still air. Increasingly concerned that I was going to get lost in the middle of nowhere, I decided that I would head back if the way did not become clearer soon.

At that point, I practically tripped out of the jungle and onto the actual trail. It was over a metre wide, very clear and distinct, heavily trodden and, in some places, marked with stones. With the benefit of instant hindsight, I laughed heartily at my mini-adventure and cursed Paul’s wonky directions.

The journey to the lighthouse was pretty easy going, now that I’d found the real trail. It did cross over the island’s highest hill, but the summit isn’t especially high nor steep. It only took about 45 minutes to get there, but a little longer on the return trip as my old and decrepit boots had left my feet very sore.

Situated on a bald hill at the southern tip of Koh Rong Sanloem, the lighthouse is now the property of the Cambodian Army. It is surrounded by artillery pieces which, despite thick rain covers, look rusted and uncared for. On guard is one rather old guy. Well, I say “on guard”, but it took quite a while for him to respond to my presence. In accordance with the note scrawled on one of the main building’s walls, it cost me a dollar to go up to the top of the lighthouse.

The view from the top was impressive (definitely worth US$1!), though not only because it showed the whole of the island, with its rolling, jungle-covered hills. It was spectacular to me because I had earned it. I had gone on my own little adventure, which comparatively few others did, and I had succeeded in my modest objective, in spite of some minor difficulties. That’s always a good feeling, but getting a great view as a reward made the whole trip worth the time, effort and money.

At stupid o’clock on 9th December, I rose in the darkness of a power cut and quietly left my hotel, walking north to the pier I had arrived at. There I waited for my boat home, enjoying the sunrise over the island. Finally, the speedboat arrived…at the wrong pier. Running as fast as my flip-flops would allow, I dashed down the length of the pier I was on, along the beach a few hundred metres, then right down the length of the correct pier. Tired and limping from a stubbed toe, I gratefully boarded the waiting boat, which immediately set sail for its next stop – the pier which was literally right in front of the hotel I’d been staying at.

That’s the kind of daft mistake I can enjoy in hindsight. Harder to enjoy is sitting at Sihanoukville Airport for several hours because Paul’s estimates of how long the journey there would take were grossly exaggerated. That was followed by having to check my hand luggage in, complicating my journey home and meaning that I now have another stamp for Kuala Lumpur in my passport, despite being there for only about 20 minutes before I was back airside again. Such is travel.