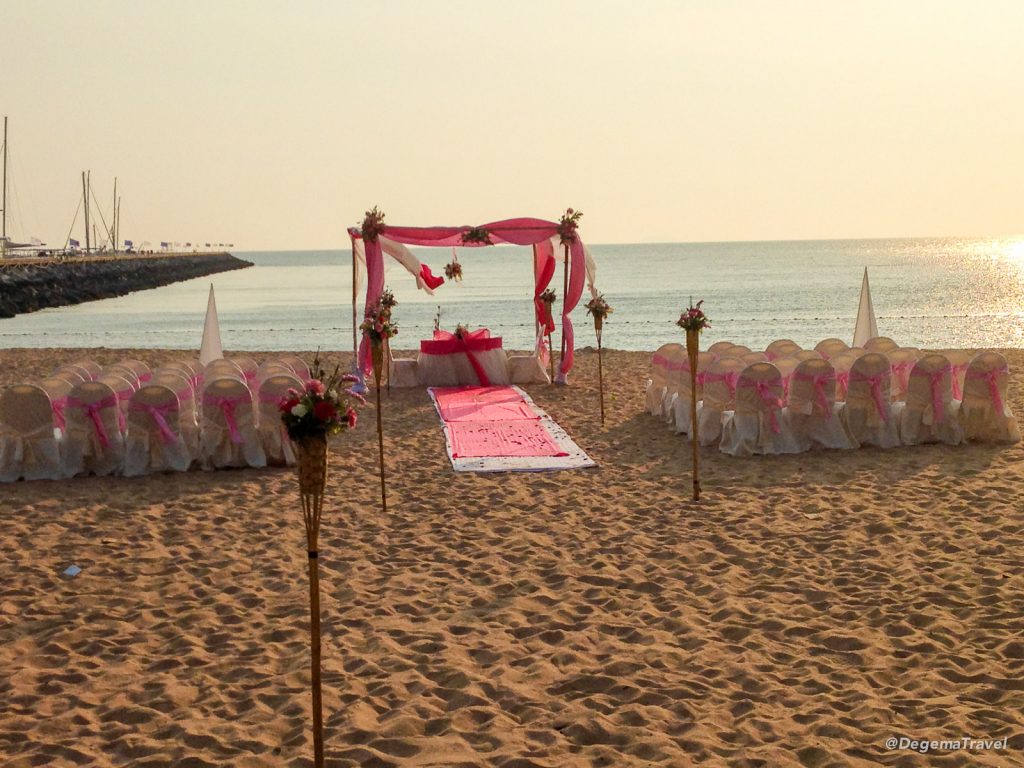 The third and last of my Songkran travel aims was ticked off a couple of days ago and I’m now back in Phuket and back to work. My few days in Pattaya were a peaceful and very enjoyable way to end my journey, catching up with friends and family and sharing in the joy of a wedding.

Getting from Bangkok to Pattaya was very simple. I just walked from the hotel to the BTS, rode that for a couple of stops to Ekamai, where the Eastern Bus Terminal is located and jumped aboard the next service to Pattaya. Tickets cost only 106 baht now (30 baht less than they did about a year ago) and the buses are well-maintained and carefully driven, using the fastest possible route without driving like a #Hellvan! Rung Ruang is, without a doubt, the safest and most cost-effective public transport available for the journey. From the bus terminal, I took a motorbike taxi to my family’s house on the outskirts of Pattaya. No hotel review for that, obviously!

A Nice Day For a White Wedding

Saturday was the big day for my friend Jasica – the model who starred in my Week 8 Project52 shot – and her fiancé, a Dutch expatriate named Ronald. The party started at 4pm and, not knowing if Songkran would cause chaos on the roads, I left an hour early with my step-mum’s usual taxi driver. Fortunately, while there had been a major accident on the opposite lane, the partying had abated somewhat in preparation for the chaos reported by my Facebook friends today (Monday 18th April 2016) with even more madness expected tomorrow for the really big Songkran day in Pattaya – Wan Lai (“the day that flows”).

I therefore got to the venue – Botany Beach Resort Pattaya – a little early. I was very glad that Jasica had suggested a quite casual dress code because even wearing shorts (and feeling horrendously underdressed as the groom was in a three-piece suit), I was sweating in the intense heat and humidity.

The wedding itself had been expertly planned by Jasica herself. A relatively small affair, with only a couple of dozen friends and family and quite a short ceremony, it was nonetheless romantic and joyful to behold. It was a secular, but western-based affair. I have attended a full-blown Thai wedding once before, but that will have to wait for another post.

I hope Jasica and Ronald have a very happy life together and I wish them all the luck in the world!

The following day, I needed to get to the airport. As anticipated, the flights out of Pattaya were fully-booked when I looked around the middle of the week. That gave me the choice of flying out of Suvarnabhumi International Airport or Don Muang International Airport, both in Bangkok. The former is the new, ultra-modern facility just to the east of Bangkok while the latter is the former main airport, right in the heart of the city. Naturally, Suvarnabhumi is the easiest to reach from Pattaya.

There is actually a direct bus service from Pattaya to the airport, but that would have involved getting into town first. My family’s house is a bit in the sticks and far from any public transport links. I wasn’t particularly well disposed to using the regular driver again because he ripped me off on the ride to the wedding, so I instead used the fairly reliable Grab app. I’ve used this a lot, both in Phuket and Pattaya, and found it extremely effective, simple and reliable. Rather than complicate matters by adding extra legs to the journey, I just booked a cab directly to the airport. It was more expensive that way, but not significantly so.

There was nothing particularly remarkable about the journey home. The flight was a little wobbly at times and the aircraft made a few unusual clunking sounds just before take-off, but nothing fell off and we didn’t fall out of the sky or anything. It was a simple and safe trip, with the typical good service from Bangkok Airways.

On landing, I left the airport and got a metered taxi to take me back to my home in Patong. However, as we approached the Phuket Town Bypass, I realised that we were actually pretty close to Phuket Bus Station 2 and my motorbike, so I diverted the cab to there.

What followed was an almost slapstick display of running around and achieving very little. I found my motorbike pretty much as I’d left it, except for one really odd thing: Someone had removed both of the mirrors, but left them on the bike, in the cup-holder-like storage spaces just under the handlebars. They weren’t damaged or swapped for a different type or anything of the sort. They’d been removed for, apparently, absolutely no good reason!

I reattached them without issue and went to drive home. However, when I hit the electric starter, nothing happened. The electrics still worked – the engine was doing its usual diagnostic, the lights all worked and no warning lights were flashing – but the starter didn’t make a single sound. I tried kick-starting it a bit but, while the engine was making all of the right noises, it wasn’t starting.

I decided to check the fuel tank and found that it wasn’t just empty, it was bone dry! What little fuel I’d had left after driving to the station a week previously must have evaporated from it being sat in the sun all that time. I walked across the road to the petrol station which, it being about 10:30pm by this time, was obviously closed. However, there was a lady there with whiskey bottles full of petrol for sale. She emptied out a plastic water bottle, filled it from one of the whiskey bottles, and kindly parted with it for 34 baht instead of the 35 baht it should have cost. That was every penny of change I had and the alternative was making change for a 500 baht note!

Returning to the bike, I poured in the fuel and gave the starter and kick-start a few more tries until I was dripping with sweat, still to no avail. Even a nearby motorbike taxi driver gave it a few goes, but nothing. Finally, I accepted defeat and the helpful driver took me home on his bike – a 300 baht ride.

The following day – today – I returned to the bike after work. The mirrors were, fortunately, still attached. I wheeled it just down the road to a bike repair shop and the mechanic there started to take it apart. Eventually, with the help of his wife (who could speak a little English), he told me that an important cable had been chewed through by rats. He replaced the missing cable (for a mere 200 baht) and I’m mobile once again!

A friend on Facebook posited an interesting theory which does actually explain this weird selection of facts. His theory is that a vampire attempted to steal my bike. He said that the 1922 silent movie Nosferatu showed that vampires are nocturnal and are commonly accompanied by rats. “The vampire that tried to steal your scooter had to unscrew the mirrors in order not to burn,” he said, “but he did not succeed as there was no fuel in you scooter. In his anger he ordered the rats to destroy all cables!”