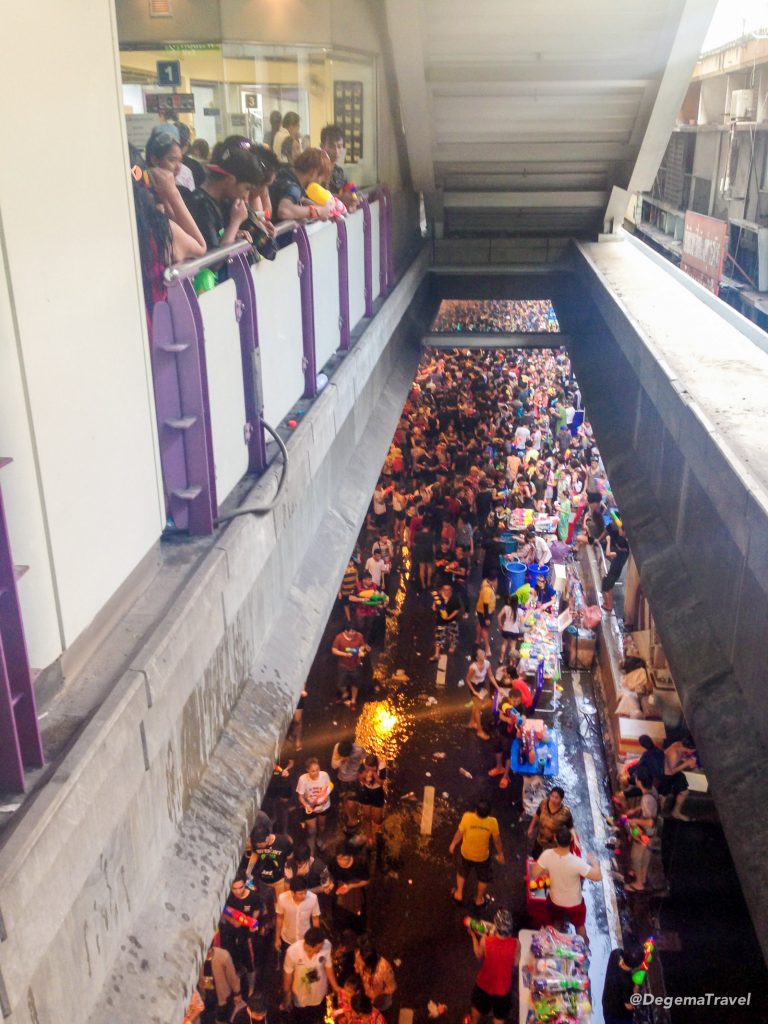 I have now completed the second objective of my Songkran travels – celebrating the festival in Bangkok. It was exactly as chaotic as I’d been led to believe, but it was a lot of fun and a worthwhile experience.

As an aside, if you’ve been following my travels closely, the reason why there wasn’t a post yesterday was because not all that much occurred. I slept until shortly before check-out time in Hua Hin (because, as I said before, I’m not a morning person), got a motorbike taxi to the bus station and just managed to get onto the bus to Bangkok before it departed. It meant the people at the station had to chase after it, shouting for it to stop (and I’ll bet I was really popular with the other passengers as a result), but I got it.

Three hours after that, I was at the Bangkok Bus Terminal Chatuchak. From there, the Phahon Yothin MRT Station is just about within walking distance (if you don’t mind getting rather sweaty), which took me to the Sukhumvit Station, where I changed to the BTS system and went one stop east to Phrom Phong Station as it was marginally closerto my accommodation – S Box Sukhumvit Hotel. As with the place in Hua Hin, a full review will follow, once the trip is done.

As an additional aside, I’m afraid that I don’t have that many pictures to share this time; certainly not as many as I’d hoped for. My camera body does not look like it’s going to recover from having drowned in my sweat any time soon, so I’m reduced to just my iPhone.

Will I Ever Learn?

Although it is generally my philosophy to not make the same mistake twice, there is one I make over and over again, without fail. Actually, there are two: firstly, I can never manage to spell the word “truly” right first time. I always spell it “truely” for some reason. Secondly, I insist on heading out to undertake strenuous activities during the hottest part of the day. I’m currently considering renaming this blog to “Mad Dogs and an Englishman”! Please let me know your thoughts on the idea in the comments.

So, after a generous lie-in (still not a morning person. That might make a good blog name, too!), I headed for the BTS at 11am, arriving at Sala Daeng Station on Silom Road soon after. Silom is, according to reliable information, one of the top places to celebrate Songkran, being particularly popular with Thais.

The other popular destination, rather obviously, is Khao San Road, which is famous for its backpackers and party atmosphere. Of the two, Silom was my first choice for two reasons. For one thing, it is easily accessible by BTS while Khao San Road is not. Secondly, and more importantly, Songkran is a Thai festival and, in my humble opinion, is best enjoyed with Thais. Travelling all the way to Bangkok to party with other tourists and backpackers seems kind of redundant to me. It’d be like a person from Orlando, Florida flying to France just to go to Disneyland Paris!

During Songkran, Silom Road is closed to vehicle traffic from 10am to 10pm. It quickly becomes lined on both sides and along the central divide of the dual carriageway with stalls selling street food, water guns, goggles, hats, drinks and ice water for shooting, charging 5 or 10 baht for a fill, depending on the size of the gun. I paid about 350 baht for…well, it didn’t really have a brand. It’s the gun with “1500” written on the side. They always use the same selection of water weapons every year, so just look out for that. I’ve always found it to be a good choice, combining a pretty good ‘ammo’ capacity (a 10-baht fill) and a powerful and accurate spray without being overly heavy or unwieldy.

So, armed and ready, I started walking a loop from one end of Silom Road to the other. I soon found that I was walking in the same direction and at roughly the same pace as a little Thai girl. She couldn’t have been more than about 10 years old, wearing a bright orange shirt (the traditional flowery style, which everyone wears at Songkran, including me) and toting one of the backpack-style water guns. While they have a much better capacity, they tend to break easily and lack the cathartic power of the rifle-style guns.

This little girl had a devilish streak and would take quite regular shots at me. I started messing around, shooting other people then pointing at the girl and saying she’d done it (it usually didn’t work and we’d both get shot in return). She started doing it back. Pretty soon, we were generally messing around and having a great time celebrating Songkran. She was making sure I was following along whenever we stopped to reload our water guns or went to dance at the street parties or whatever, so it wasn’t like I was stalking her.

As with my hero from the hill climb in Hua Hin, I have absolutely no idea what her name was. Unfortunately, she didn’t speak much English (hardly surprising, given her age) and my Thai isn’t good enough, so we couldn’t converse much except in the simple language of gestures, laughter and messing about. From what I observed, she was there with her grandfather (some male relative who was on the elderly side, anyway), so I decided to stick with her for a while on the basis that we would both have a more fun experience that way. As I said, celebrating Songkran with Thais is always the more enjoyable option.

Get This Party Started

​​By around 2:30pm, the place was starting to get much busier. I had initially been concerned that perhaps recent news reports suggesting Songkran would be a much quieter and drier affair (due to drought concerns and water shortages) might have kept people from celebrating. I then realised that, having strayed out with the mad dogs into the midday sun, I’d just arrived way too early. It was around this time that I lost track of my new friend while refilling my gun. I searched for a while, but failed to find her. I hope she had a fun and safe time!

So, now on my own, I continued to patrol up and down Silom Road, taking potshots at people, photobombing people taking selfies and getting perpetually drenched. I briefly took refuge in a fast food outlet just to refuel myself before returning to the fray.

The pace of my patrolling was significantly reduced directly under Sala Daeng BTS Station, where Red Bull appeared to have set up quite a popular party – one of two or three along the length of Silom Road. It was quite a fun one, but a challenge to enjoy. Let’s just say that, if you’re a fan of personal space, it is probably best to give this one a wide berth! Fortunately, the constant spray of icy water prevented it from getting too stuffy.

At the Going Down of the Sun…

Most of the four previous Songkrans I’ve enjoyed around the country wound down around sunset. Frankly, the ice cold water stops being fun if the sun isn’t there to dry and warm you. Also, I’d been walking the same kilometre of road almost endlessly for about seven hours and I’m not fond of partying like a canned sardine, so I called it a day just before 6pm. As I always do, I gave my gun to a total stranger on their way to the party for them to get some more fun out of it.

I gather that the water spraying in Bangkok does continue well into the night, particularly in the nightlife hotspots like Silom, Khao San and RCA (Royal City Avenue). I however, lack the energy. I shot my bolt much too early and spent too much of the day in the heat of the sun, like a mad dog.