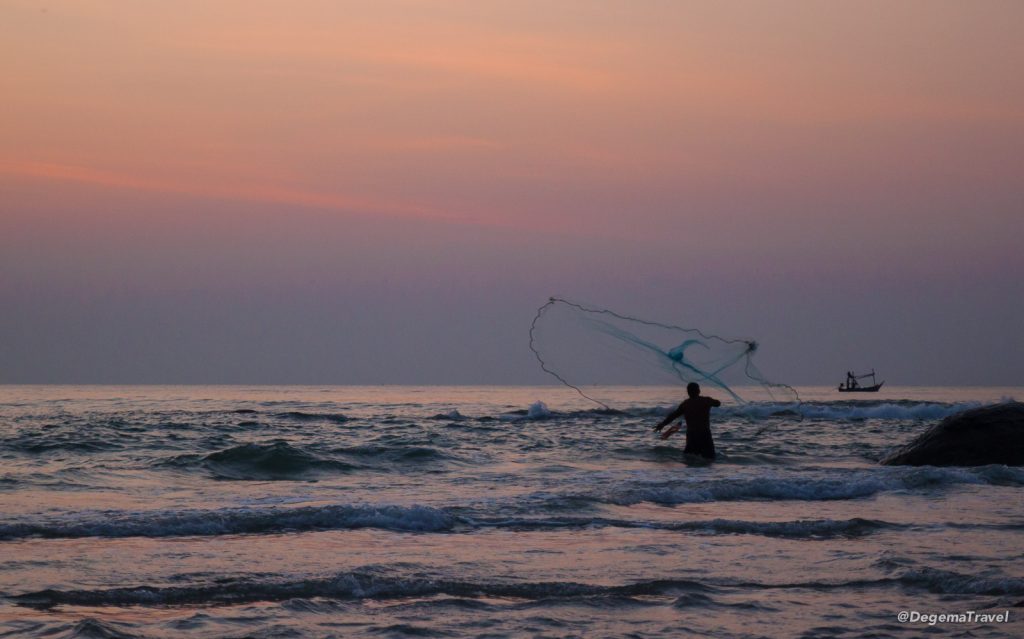 Well, it’s fair to say that the bus was a terrible idea for my Songkran travels. Should definitely have taken the plane!

The biggest part of the problem is that I cannot sleep in a seat. Give me virtually any horizontal surface and I’ll zonk out eventually. I’ve slept in the back of a truck on rough roads in Tanzania, on a cheap folding camp bed which felt like a pile of scaffolding, on sofas, on the floor of a cross-channel ferry in rough seas, on a mountain top in Oman, on a sleeper train in Thailand and so on. However, I have never succeeded in getting a solid period of sleep on a plane or bus. I always sleep on my side and the shape of a seat renders that virtually impossible. If anyone has any tips, in that regard, I’m all ears!

I See the Light!

It wasn’t just the seat, either. The bus made a couple of stops along the way to drop off passengers or stop for a toilet break at a huge terminal just outside of Chumphon (about 384 km from our starting point at Phuket Bus Terminal 2 and 263 km from Hua Hin). At each stop, the bus’ interior was fully illuminated to ensure that those disembarking didn’t fall down the stairs or trip over other people or anything. A perfectly sound safety measure, but one which woke pretty much everyone on the bus. The only person who managed to sleep through it was the Chinese lady who had clearly come prepared for this, claiming the little bit of floor behind the back row of seats (which included my seat) with an inflatable cushion and a blindfold.

When it wasn’t the lights inside keeping me awake, it was the lights outside! For reasons unknown, the curtains were never closed by anyone. Not even the other passengers took it upon themselves to do so, which is quite remarkable, really. There were no signs preventing me from doing so unilaterally (at least, not that I saw/could read), but I didn’t want to buck what was clearly the trend. That meant that every streetlight, headlight and shop light was flashing in my eyes as I was trying to sleep.

I will say this in favour of the bus: I was surprised by how quiet it was. Being on the upper deck, we were well insulated from the engine. Even sat right at the back, directly over what is quite a powerful diesel motor, the sound was negligible. The only audible disturbance was an occasional whoosh from the air brakes and, given the Thai style of driving, it was very occasional!

At around 3:30 am, I was just starting to drop off through sheer exhaustion and *ping* – on come the lights! Blearily looking out the windows, I spot signs for Hua Hin. We’d arrived, a couple of hours before I expected. I was kicked off the bus as, coincidentally, was the Chinese lady with the creative sleeping arrangements (plus what I assume was her mother). The bus then continued on its way to Bangkok.

I first went to find my hotel, which was a curious challenge in itself (more on that when I review the place), but I was able to drop off most of my luggage. I unpacked my camera and headed for the beach. Then I actually looked up what time dawn would be and went back to the hotel (fortunately not a long walk) to wait out the two hours before 6:30 am.

Walking back to the beach again through the waking city shortly before sunrise was quite an interesting experience. It always is – it is one of my favourite times to see a new place, though my inherent laziness and fondness of sleep makes it an experience I have rarely had. It was like watching a shift change. The night shift was ending – the last of the bars closing up and the waitresses heading home (on a few occasions with their latest ‘boyfriend’ in tow) – while the day shift was just beginning. The first stalls were being opened up and prepared for the day’s custom to the musical accompaniment of the dawn chorus.

Sunrise itself was quite a good one. As magical as a nice sunset is, sunrise always has that little bit extra to give; a feeling like it is more personal. Anyone can be awake and alert enough at about 6:30pm to watch a sunset, but very few are out and about for the dawn. I shared Hua Hin’s huge beach with only a few cuddling couples, a couple of fishermen, a number of early-morning joggers and, of course, saffron-robed monks collecting alms and chanting prayers for the hotels along the coast.

Checking the time and realising that I still had quite a considerable wait before check-in was available, I decided to walk along the beach. It’s a nice way to pass the time and there looked to be quite an interesting attraction – Khao Takiab. Sadly, my efforts to reach it were stopped by the tide. I hit a section of beach which I couldn’t easily pass and, by this point, having been awake for 24 hours with only intermittent and frequently interrupted sleep was starting to take its toll. I turned around and barely got back to the hotel with enough energy to get into my room.

And that’s where I’ve been ever since, which is why the bus was a fundamentally foolish idea. In saving money, I have wasted that much more valuable commodity – time. I know that I am a cranky and miserable soul when I am tired. I become more prone to negativity, verging on depression. I know that my body has this limit, so I knew that my only recourse was to give up on the day and sleep through most of it.

To be fair, it’s not like I’m missing much. I felt significantly better about this decision once I’d checked up on Hua Hin’s most notable attraction to find that many websites quote the railway station as being the number #1! I’ll maybe try again at Khao Takiab tomorrow, but the priority is Khao Sam Roi Yot National Park.

I’ve spoken to my model friend, Rina – the other priority of my time in Hua Hin – and it looks like a meeting might be possible, but is far from certain. She did reveal an interesting and hitherto unknown fact, during the discussion. While Songkran officially starts on Wednesday, Hua Hin has been known to start it’s celebrations during the night before, making it one of the few places where water-throwing is common after dark.