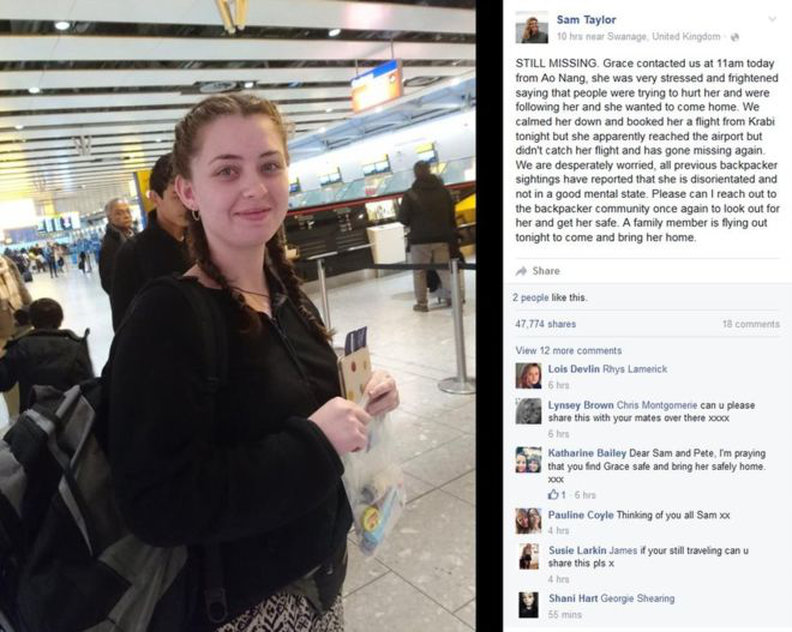 Around the end of February, there was a social media frenzy here in Thailand and back in the UK. My Facebook newsfeed was flooded with pictures of a 21-year-old backpacker from Swanage in the UK, along with desperate pleading from her family to spread the picture further and further in the hope of locating the person depicted.

I did my bit and shared the picture, but with a certain degree of reservation. In the public light of Facebook, I showed every concern for the girl’s safety. In private, I made a bet with a friend that she would show up on a beach, perfectly safe, if slightly disoriented by whatever drugs or colossal quantities of alcohol she had ingested. I was proved correct.

As was widely reported in local and international media, Grace Taylor was found the day after the appeal from her sister went viral. The original post stated that she had left her hostel in Pattaya and flown to Krabi because she was feeling frightened that someone was following her. She had last been in contact with her mother on Monday 22nd February from Ao Nang. Her mother booked the next flight back to the UK from Krabi Airport for Grace, but she reportedly never boarded it. She was found by local police in a coffee shop at Krabi Airport the next day.

The reason why I put my money on her being found not just alive, but not even anywhere out of the ordinary was because there were a lot of aspects to this story which reminded me of an almost identical story from just a couple of months earlier.

Jordan Jacobs, also 21, from Lyneham in the UK went ‘missing’ on Koh Phi Phi on Saturday 12th December 2015. Again, his picture and a description of the events leading up to his disappearance were widely shared on social media and reported by global media. On Thursday 17th December, he was reported to have been found alive and completely unhindered while strolling on a beach in Krabi, looking for a dive centre.

In both of these cases, I was naturally delighted to hear that the missing person was perfectly safe and well, but even in that first case, I had an inkling that the guy was not really ‘missing’ at all. His story was decidedly fishy. According to the initial report, the last contact he’d had with his family was through Facebook Messenger on a phone he’d borrowed off another traveller, when he told them that there was a Thai man who had just given him a free boat ride to the island and “wouldn’t leave him alone”. My immediate thought was to question what kind of kidnapper lets you borrow a phone to call home without demanding a ransom?

In both of these cases, the consistent theme is one of paranoia, both on the part of the traveller and their family. For Jacobs, eyewitnesses reported that there was a well-dressed Thai man with a “cowboy look” following him, but Taylor didn’t even have that – just a general sense of unease. Paranoia is, of course, a well-known side-effect of practically all recreational drugs, including ecstasy, cocaine, cannabis and LSD. Many of these are distressingly easy to obtain in Thailand and particularly the tourist areas like Krabi.

The paranoia of the parents is equally easy to explain, though theirs is significantly more understandable and forgivable than that of the tourists who have, in all probability (though this, I am prepared to admit, is purely conjecture), over-indulged in some intoxicant or other, even if it’s just alcohol. Thailand has its hazards and a distressing number of British tourists have died here over the years, many of them brutally murdered.

Most people know countries only by their biggest and most recent news story. In the case of Ethiopia, for example, most people recall the famine which sparked the huge humanitarian efforts of the 1980s and ’90s. Talk about Rwanda and people only remember the genocide. The most common Google search regarding Phuket is still in relation to the 2004 tsunami. If I mention the name of Koh Tao, try telling me that the first thing to come to mind isn’t ‘murder‘.

I am no less guilty of this sort of generalisation than anyone else. There are 196 countries in the world and keeping track of the full internal situation for each and every one of them is just impossible for the human brain. There is too much else to focus on and not enough time to research local and independent sources of information. Instead, we trust journalists to do their job properly, which they do. They faithfully report the most recent big story.

What you don’t then read about are the millions of tourists who visit Thailand every year without dying in the process. You don’t read about the hundreds of thousands of expatriates who have lived here for years at a time and not even got into a heated discussion. I don’t blame the media for not reporting that because, in all honesty, who’d actually read it? That’s not news.

So, what is my actual point here? Well, quite bluntly, I have an impassioned plea to make to tourists visiting Thailand: Please stop going ‘missing’! Don’t call your parents immediately after a drugs and/or alcohol bender while you’re still feeling unaccountably paranoid and don’t then follow that up by not responding to messages or attempts to contact you.

If your family are the paranoid type, keep them regularly and fully updated. Wi-Fi isn’t that difficult to find and you can get a cheap local SIM card with 4G at any 7-Eleven, so there is really no excuse to be out of contact. If the worst comes to the worst, use the hotel or hostel phone (or borrow that of a fellow tourist) and just bite the bullet and pay the bill. It shouldn’t take you too long to say “I’m not missing or dead”, so the bill won’t be that big.

As it happens, I am fortunate enough to have parents who are not the paranoid type. I talk to my folks back in the UK every few weeks or so via FaceTime for a quick catch-up and that’s about it. I know that my family is like that, so I don’t worry about it too much while travelling. If you know that your family is not that laid-back, don’t make their pre-existing fears worse by saying stupid things like “I think someone is following me” or “this guy won’t let me leave” unless you mean it. Don’t be the tourist who cried ‘wolf’.

Why should you do this? Well, it saves your parents a lot of stress and money (that flight from Krabi to the UK that Taylor never boarded would have cost them a pretty penny), it saves my Facebook newsfeed from getting swamped with your ugly mug and it saves you from looking like an idiot when you are found bumbling around on a beach or sipping a coffee.

This satirical article deserves a mention and is well worth taking a look at because it demonstrates just how foolish these ‘missing’ people end up looking.