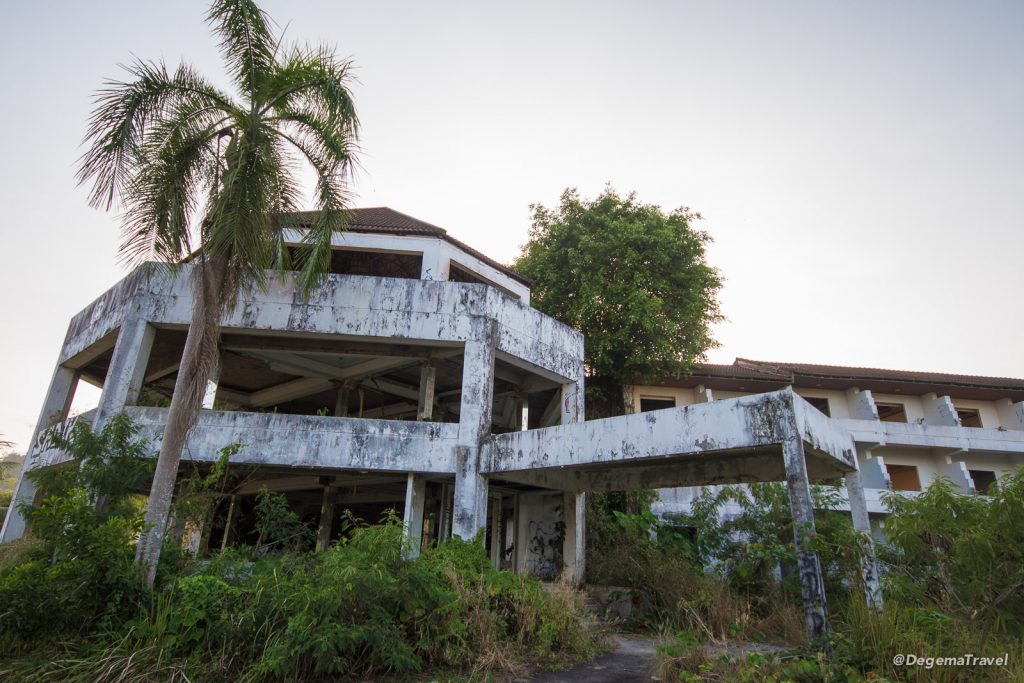 Anyone who has been reading this blog ever since I started (if there are such people out there) may recall that, for Week 9 of my Project52 for 2016, I used a black and white photo of an abandoned building. Finally, I return to that subject for the full “Paradise Abandoned” piece, and a fascinating story of hubris and optimism, resulting in ruin and decay.

​​While I admit that the story I heard to explain the existence of Phuket Country Lodge is not one that I have been able to independently verify, it is one which seems all too easy to believe. There have always been stories circulating in the local press and the expatriate community of efforts to improve the island’s infrastructure in one way or another with ambitious projects which inevitably never happen. Whoever was behind this hotel apparently didn’t find out that these rumours arise every couple of years and never amount to much until it was too late.

The story goes that some ambitious soul heard that Phuket was finally going to be connected to the rest of Thailand by rail. As it was (and, spoiler, still is), you could only take the train as far as Surat Thani and, while the line continues south, it takes a hard left turn there and proceeds towards Pattani and, eventually, Malaysia and Singapore. Passengers for Phuket have to change onto a bus, which takes about three and a half hours to cover the remaining 250 km. Why the rail link has never been made is unclear – perhaps the cost, possibly the fact that much of the land between the two points is in national parks, or maybe just the fact that quite a lot of it is rather mountainous. Either way, despite frequent promises, the last 250 km of rail has never been laid and, in all probability, never will be.

​As I said, the hapless developer of the long-abandoned Phuket Country Lodge apparently didn’t get the memo to ignore such rumours until after they had already bought a large patch of land by the northern end of the Bypass Road (which circumnavigates Phuket Town, allowing easier movement of heavy goods vehicles coming from Phuket Port) in Koh Kaew, near to Boat Lagoon Marina. They quickly threw up a grand three-floor hotel at roughly the point where the main rail terminal was supposedly going to be situated. However, before the majority of the rooms could be fully fitted, it became evident that the rail project would not happen, investment dried up and the building work halted, leaving a half-finished hotel to molder by the side of the road.

The Phuket Country Lodge was not technically abandoned, as readers of my Project52 post may recall. While I was exploring the rather spooky rooms and corridors – many of which are tagged with surprisingly professional-looking graffiti while others have crumbled away or been overwhelmed by plants – I came across a doorway which had a few sheets of plywood laid across it. Glancing inside, I saw a mattress on the floor and a clothesline strung across the room, with freshly washed T-shirts drying in the breeze. Someone, apparently, was still lodging there.

That situation is now very definitely in the past, however. While passing the site in mid-July 2017, on the way to the airport, I found that the building had been reduced to a few piles of old bricks, with the metal frame of the lobby roof incongruously sitting on the ground nearby. By now, the site as doubtless been cleared to make way for another new construction. Whether it proves to be another folly remains to be seen.