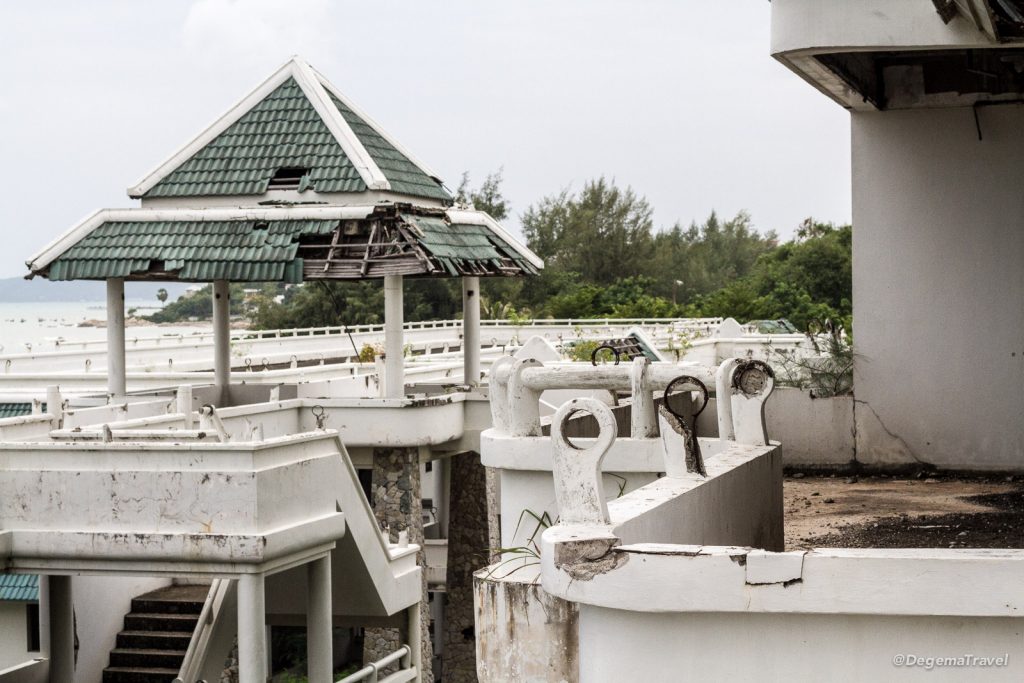 My Paradise Abandoned project returns, but in an unusual format. A couple of weekends ago, I flew up to the quiet Phayun Beach area of Rayong province, just south of Pattaya, Thailand. It was something of an odd variant of urbex, in so far as it bore a closer resemblance to urban warfare than urban exploring. I was there for an airsoft event.

The so-called “Operation: Dark War” simulation was organised by local airsoft club FRIEND (Force Recon In Expert Never Died). They gave it quite a creative backstory, with simple rules and fairly strict observance of them. A lot of airsoft is honour-based, particularly when it comes to admitting when you’ve been hit, but stuff like limiting the power of the guns used can be checked and the organisers would not allow them to be even a single foot-per-second over the maximum muzzle velocity.

The place they selected as the battlefield was an interesting one. It consists of two beachfront wings, with two towers behind the eastern one, up a small cliff. There’s an underground car park under the towers, which is what makes me think this was supposed to be a condo development instead of a hotel. I also failed to spot anything which looked like it could be a reception area or a restaurant – the sorts of thing you would usually find in a hotel.

I should mention that I haven’t been able to find much information on the place to say if my assumptions are correct. However, I have read that there were a number of condo development in the area in the 1990s and that many of them were left incomplete when the Thai property bubble burst in 1997.

FAST Shooters saw their first action together as a team last weekend during the Operation: Dark War #milsim in #Rayong, #Thailand. We were attached to Bravo Team and given hopeless spawn zones, first across 100 metres of open ground from the objective and later trapped between Alpha and Charlie Teams, both of whom were hostile. Even so, we put up a hell of a fight, demonstrating our customary resilience. ————— #airsoft #airsofting #airsofter #airsoftgun #worldairsoft #airsoftworld #airsoftworldwide #airsoftinternational #airsoftobsessed #pewpew #pewpewlife #airsoftdreams #bbgun #airsoftnation #airsoftphotography #sportsphotography #operationals #บีบีกัน #airsofterphoto #airsoftclubmember #airsoftshark #tacticalbox #6mmguns #airsoftbible_feature #airsoftology #multicam #squad

The story I was told at the airsoft event was rather darker. One of my squad-mates from the recently-formed team of foreign airsofters in Thailand (which I’m a founder member of) said that the project was abandoned when the entire family behind it was murdered in their home. I’ve been unable to find any supporting evidence for this story, though.

The story of the airsoft event saw three unequal teams facing off against each other, with shifting allegiances creating some unexpected situations. Alpha Team, in jungle camouflage, started from the westernmost of the two beachfront wings. Charlie Team, in checkered shirts to make them look like members of a mercenary group, started from the easternmost tower. I was on Bravo Team, in multi-terrain camouflage similar to that currently in use by the UK and US armed forces (among others). We started at one of the two outbuildings behind the towers.

I suspect that we were given this starting point because, of the three teams, we were the largest – about twice the size of Alpha, but only a little larger than Charlie. Our numerical advantage was tempered by the fact that we had to cross 80 metres of completely open ground, under constant sniper fire, in order to reach our objective. That clearly being suicide, we instead took a wider route around to the west and joined up with Alpha, forming a temporary alliance in order to take one of the two towers.

We then had a lunch break, with Thai food kindly organised by FRIEND. Afterwards, we discovered that our start point had moved to the very top of the building we had captured, but that our alliance with Alpha had ended. Having clawed ourselves out of the frying pan, we had landed right in the heart of the fire, with enemies on both sides of us. Pinned by Alpha, we were unsurprisingly overwhelmed by Charlie.

Anyway, I swore that I wouldn’t turn this into an airsoft blog, and I’m doing a very poor job of keeping that promise, so I’ll return to talking about the building. I’m not generally keen on urbex in buildings which were abandoned before they were completed. Half-finished shells are not as interesting as places where you can see the remains of the old furnishings and the lives the rooms once contained.

This is a very easily accessed property, being right behind the beach road and close to a very remarkable bridge, on the other side of which is a row of beachfront restaurants. As a result, the rooms have seen a surprising amount of activity, despite the lack of doors, windows, furniture and, in some cases, areas of floor. The white walls are covered in really pornographic graffiti and squatters have been known to take up residence on the upper floors, when there are no BBs flying around.