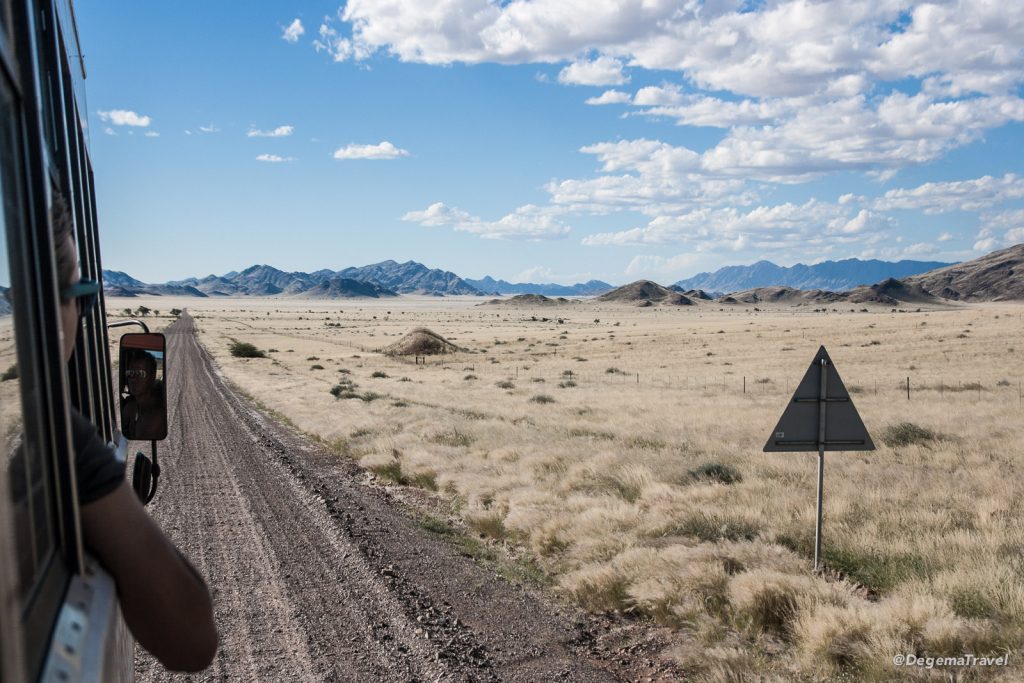 Overlander: Day 5 – On the Road

Alas, it’s not really an overlanding trip without travelling long distances by road. Several days of my adventure through Southern Africa in 2011 were just getting from point A to point B, and Day 5 was the first of these.

That’s not to say that these days were necessarily bad. I’ve always been the sort of soul who struggles to get bored on long road journeys. Just watching the world flash past the window is more than entertainment enough for me, and that’s just in the UK. In Namibia, there’s rather more to see.

It was on this rather innocuous journey from Hobas to Sesriem that our group had its first encounters with Africa’s famous wildlife. We were absolutely delighted to see springbok dashing by and across the road. We desperately snapped dozens of photos of creatures we would see so many of in the coming weeks that some of us would happily carry on sleeping in the face of entire herds of them.

Other than the ubiquitous springbok, we saw a few hartebeest and even some zebra. It was the weaver bird nests which particularly impressed me, though. Intricately designed and constructed but massive in scope, some had grown so big that they had almost completely absorbed the tree they were built in. One or two had gone a step further, putting so much strain on the tree that it collapsed!

Sadly, with the good must also come the bad. With the exertions of the previous day and a lousy night’s sleep at Hobas, I was getting more and more tired – a dangerous state for me, as anyone who knows me well will tell you. My journal notes that I was not so much exhausted in body as I was in mind. I still had the last dregs of that energy boost I first mentioned on Day 3, but it was now only keeping my body moving.

When I get tired, I start to spiral towards depression, the first stage of which (for me) is self-deprecation and loss of self-esteem. My journal notes that I was finding the travel stories of my companions to be so much more interesting and varied than my own. At the time (and, to a certain extent, even now), all of my stories inevitably started with “when I was in Oman…”.

As I wrote at the time: “[my stories] are all from the same damn country, which half of them didn’t even know existed until a week ago. As a result, I am tending to keep my stories to myself.” With hindsight, I obviously realise that the wonder of travel stories is that they’re impossible to compare. One is as good as any other, and as valuable for the insights it gives into different countries and cultures and even the person exploring them. This was 2011, though, when I was a lot younger and dumber.

The landscape eventually changed, with rocky roads and mountainous horizons giving way to grassy plains. The one constant was the amazingly blue sky, which was only ever accented by a few fluffy white clouds. We finally arrived at our campsite for the night at some time around 4:30pm, and it was quite a nice one. I went off to take photos and noticed Zeynep doing the same, so had a brief chat with her about cameras and some basic photographic techniques. That provided a nice (if temporary) boost to my heavily flagging mood, if nothing else.

A storm was building in the mountains to the north, which gave us a bit of concern – that’s the direction we were due to travel next. Doug, Jase and Gino warned that this particular tour was running late in the season, as the rains were starting to arrive. They said that we may catch a bit of rain as we got towards Botswana, but were confident that this storm would burn itself out long before it became an issue for us. Its remote position on the horizon did make for some cool photos, though.