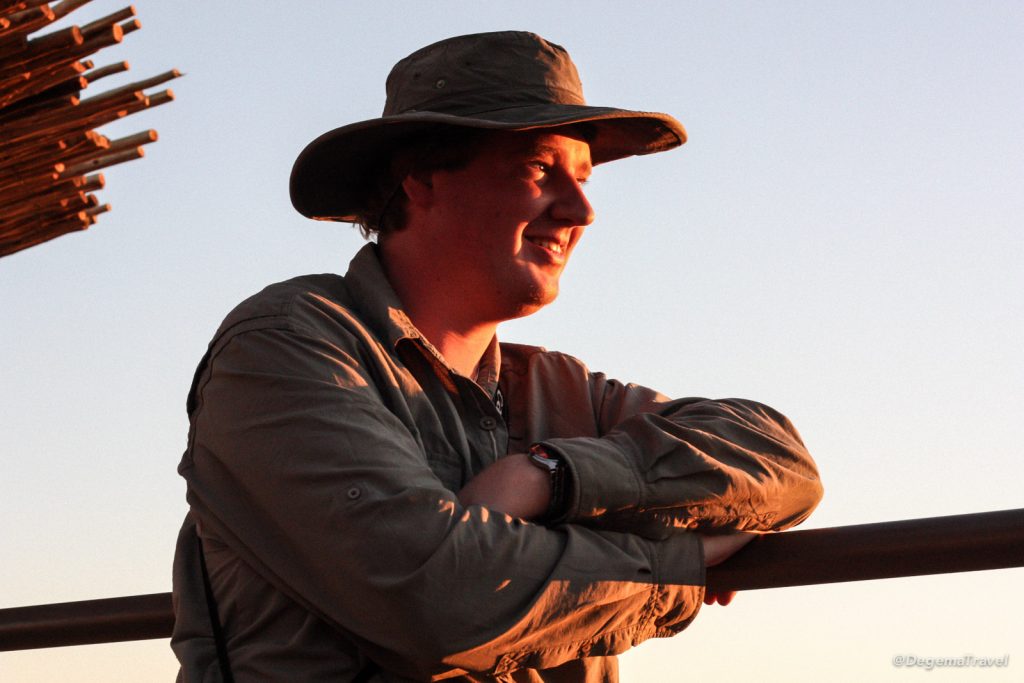 When I awoke on the fourth day of my adventure through Southern Africa with Dragoman, I still had the same energy boost travel always tends to give me. I don’t really like sitting and watching people labouring for my benefit, so I volunteered to help Dougie out with making the bacon-and-eggs breakfast for everyone.

Of course, this energy is a finite resource, and this was a 45-day trip. It would eventually run out. However, for now, I was pumped up for a busy day.

After breakfast, most of us jumped in a pick-up truck to head up the Orange River to go kayaking. Some quite considerable distance upriver, we boarded our two-man boats. I was paired with Tom, Emma with Sandra, Emily with Cara and Gino was with Ben. Obviously there aren’t two of me. This Ben was the South African guy who had driven the bus which got us here. For some reason, Zeynep and Jase stayed behind.

The voyage was fantastic. The river was mostly calm, with occasional mild rapids, but the scenery around us was delightful. A number of birds swooped by us, fishing in the river, or perched on branches by the banks, ready to skewer any unwary morsel seeking shade. The landscape here is a little bleak and reminded me of old cowboy films in a rather pleasant, nostalgia-inducing way.

A Bridge Too Far

Tom and I were at the back of our little flotilla, as we gently paddled down the river. I’ve always quite liked being at the back – the Tail-End Charlie – because it’s a position with a little bit of responsibility. It shows a modicum of trust from guy at the front, giving me the duty of making sure we leave no one behind. It also means you get some good photos, albeit mostly of people’s backs.

This position proved to be a bit of a disadvantage when we reached the bridge. It was the bridge we had driven across the previous day, just after crossing the border from South Africa into Namibia. It’s a utilitarian structure of naked concrete which we got a very close look at. With fairly narrow spans, the river flows under it very quickly and turbulently. We were instructed to go through it quickly to maintain stability and avoid slamming into the bridge supports.

Emma and Sandra were in the third boat of our group, immediately in front of Tom and me. They either didn’t go in fast enough or aimed badly because they hit the support head-on, immediately capsizing. I shouted to Tom to row backwards, slowing us down so that we didn’t hit the girls in the river or their boat. The current caught us, swung the stern of the kayak around and we broadsided the bridge, also capsizing.

On our way to the nearest bank of the river (which happened to be the South African side), I managed to rescue Sandra’s camera. She’d helpfully tied it to her water bottle, which acted as a float. I’d tied my camera to my life vest, so it was perfectly safe. We quickly got back into our boats and continued downriver.

A few more miles of lovely scenery later, now considerably cooler thanks to my dousing, we approached the Felix Unite campsite again. There was one last challenge to overcome – a set of rapids right by the resort. This time, Tom and I managed to stay upright and swiftly reached the shore to disembark. Emily and Cara were less fortunate. They floundered and capsized.

Having recovered their kayak and basically swum back to the camp, the two of them looked pretty done-in. To this day, I still regret the dumb remark I directed at Emily at that moment. In the truck on the way upriver, she’d commented that she didn’t have a sunhat, so I leant her mine. I was particularly fond of that hat and, when she capsized, I was a little concerned that she’d lose it. I said as much when she emerged, tired and soaked, and returned the hat to me. Given that she’d just had to swim through a murky river and had lost her Ray Bans in the process, this was profoundly insensitive.

After drying off, getting changed and having lunch, we jumped into Helena and set off on our first drive with the rather rough-and-ready orange truck. The comment in my contemporary journal says that we didn’t go far but, consulting a map, we actually covered over 100 miles. In Africa, “not far” is very relative.

We reached the Hobas Camping Site, which was “a bit grotty,” as I wrote it. It was extremely dusty and populated with the biggest bugs I have ever seen, including crickets a good five inches long! They did have fire pits and supplies of wood, though, so we were at least going to have a good campfire that night.

After setting up our tents, we got back into Helena for a much shorter drive to Fish River Canyon. It was only about 15 minutes, but it was a delightful time. I was in the passenger seat, with Gino driving. The Spanish tour leader was a font of fascinating information. He was telling me that the canyon is technically a deep and narrow gorge within a wide and shallow one. The wide one was formed when the river flowed slowly but, after some kind of tectonic movement, the speed suddenly cranked up and the erosion through the sedimentary rocks also accelerated. The resulting canyon is apparently considered either the second-, third- or fourth-largest in the world, depending on exactly how you measure it.

I noted in my journal that the drive was “quite an experience.” I add: “It is totally different to being sat in the back [of the truck]. It is difficult to explain why – it just feels more controlled. And more adventurous.”

We watched the sunset from a purpose-built platform overlooking the canyon. It wasn’t ideal, photography-wise, since we were shooting directly into the sun, making it impossible to balance the light and get a clear image. However, the scenery was spectacular and I remember experiencing a brief but wonderful sense of peace there.

Joining the rest of the group, I non-too-subtly perched by the rail, not far from where Zeynep was sat with her camera. Several people laughed at this, but Zeynep fortunately took the hint and snapped a photo. That photo – the one shown below – would go on to play a prominent role on this blog, being effectively my profile picture.

After dark, we drove home. That travel energy I mentioned before was now utterly spent and even a spaghetti-and-meatballs dinner couldn’t revive me. I spent most of what remained of the evening staring into the fire before retiring for a rotten night’s sleep.