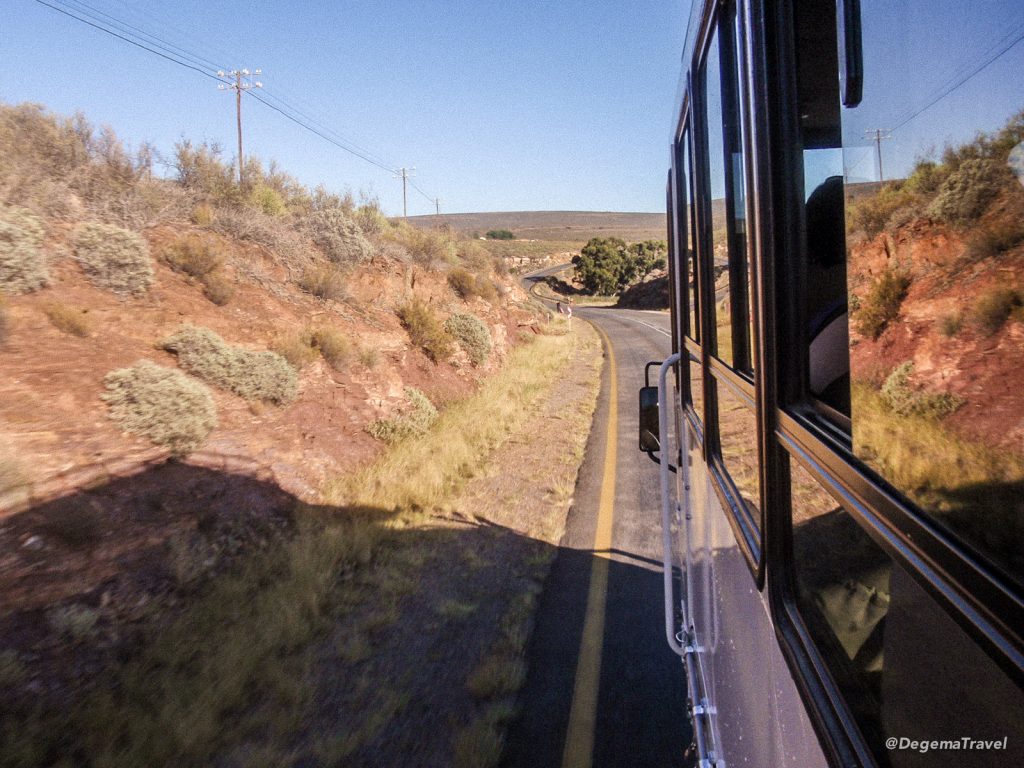 My recounting of my adventures in Africa with Dragoman must begin with an apology. In the previous post, I said that our group was introduced to the truck – Helena – in South Africa. As I’ve continued to read through my old journal of the trip and dredge up memories from over seven years ago, I now recall that we did not meet her until we arrived in Namibia on Day 3. Up to then, we had ridden in a perfectly comfortable but perfectly ordinary and less fun bus.

I awoke from having basically passed out after the wine-tasting evening at Highlanders Vineyard just before my alarm went off, at about 6:30am. Travelling has always given me a great deal of energy and, having spent a surprising amount of my university years sober, followed by two years living in a country where you need a license to get a drink, my liver was still very capable and I didn’t really get hangovers. That was quite a long time ago now…

We packed up our tents and gear and headed out into the mild and clear morning, driving north. This was primarily a day of transit – simply getting from A to B. Inevitably, on a trip of this scale, there would be quite a few of these to come. Even so, I very much enjoyed the view, watching the landscape zip by. After about three hours, we stopped for a lunch break in the small town of Springbok.

My notes on the subject of this particular town consist entirely of the following text, scrawled with great difficulty as we bumped along the road: “Springbok is a horrid town”. Fortunately, my memory of the place is rather more complete than my notes.

A barely noticeable blip on the highway, virtually the only noteworthy feature of the place was a Shoprite supermarket, which was rather rundown but at least sold enough junk food and snacks to keep us going until dinnertime, though the queues at the checkouts were staggeringly long and slow-moving. We had planned to spend only an hour there, but it ended up being two.

The town’s school is directly opposite the supermarket. As I walked around the main street (Voortrekker Street) to relieve my wanderlust and general urgency to leave, a group of kids saw my camera and posed for a photo, which I took.

I was a little uncomfortable about the place. I felt that wandering around with a camera made me a very obvious target, not helped by the general safety briefing we’d been given in Cape Town. The entire town – not just the supermarket – was pretty run down and my journal mentions a couple of other unpleasant details. Nothing untoward actually happened, so perhaps I was just being paranoid, but I spent as much time as possible in the safety of the bus.

At around 3:30pm, we reached the border between South Africa and Namibia, which is marked by the Orange River. The landscape near the border actually reminded a bit of Oman, particularly the area near the border with the UAE (but that’s another story). We passed through the Vioolsdrift Border Crossing without issue. We handed all of our documents over to Jase, who wandered off for a while and returned with all of our passports freshly stamped. About 10 km further on, we reached our campsite – Felix Unite.

Finally, we actually did meet Helena in all her glory. Apparently, her mighty V6 engine was only firing on five cylinders and the power steering was out of order, but she remained reliable for the whole trip and her rugged, weathered state suited the atmosphere of the trip. She did look a little out of place at the campsite, though, which was quite clean and neat, featuring a riverside swimming pool and a very good restaurant and bar.

The Dragoman tour company was recommended to me by a friend and former travel companion who had taken their trip down the entire length of the Americas, from Alaska to Tierra del Fuego. She’d highly recommended the company, but warned me that the Africa trips were mostly piss-ups, with regular drinking sessions. This was made pretty evident at Felix Unite.

That evening, Emily, Emma, Tom, Jase and I played a drinking game of Jase’s. It was basically a memory game, where you had to speak each line of the poem in order, clearly and correctly, with the poem getting longer every time you got it right and you getting drunker every time you got it wrong. With my good memory and better liver, I managed it fairly well, and my accompanying hand movements generated a few giggles. I even still remember the lines to this day:

Err…it was something to do with ‘pheasant pluckers’, but the exact details are a little hazy, as was everything else, by that point.