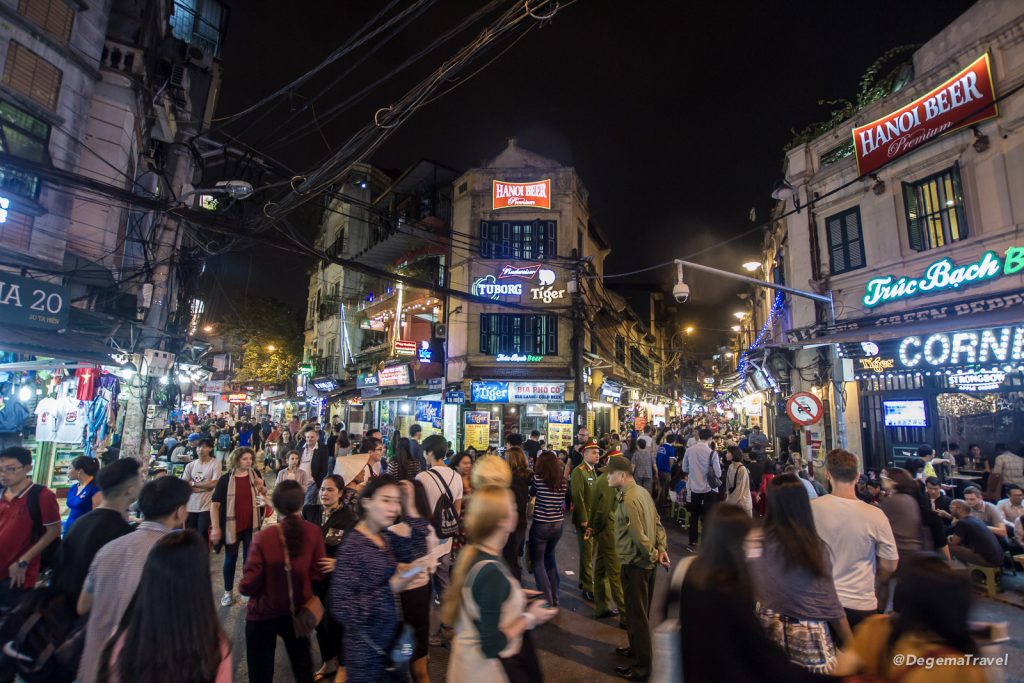 Not Being Lonely in Hanoi – Part 2

In my last post, I talked about my plan-less plan to see the north of Vietnam, arriving in Hanoi and rescuing a young girl’s balloon in a random act of kindness. Now that first evening in the country continues as I approached the Old Quarter.

Dinner and a show

One of the people I’d asked for Vietnam travel tips had been a colleague at work. She had advised me to check out a burger restaurant in the Old Quarter called Chops, which she said was a bit expensive, but worth every dong. True to her word, the burger and milkshake I had was extremely costly, but both were extremely tasty. Having feasted, I then went for a wander. I was aiming for Bia Hoi Junction – the famous bar area of the city – but was planning just to explore a bit on the way.

I did reach the junction, which was packed. It was a bit too busy for my liking and nowhere struck me as a comfortable place to sit and have a quiet drink or two, so I took a few photos and started heading back towards home. During my exploration, I’d come across a cultural show being performed on a street corner, which was equal parts vibrant and interesting, if baffling and loud. I watched for a while as dancers barely avoided breaking their ankles on the uneven ground they’d chosen as their stage, apparently while re-enacting battles between deities, if I was understanding it right.

Not quite ready for the long walk back to my friend’s apartment, I decided to sit by Hoàn Kiếm Lake for a while and make some notes in my journal. While I was doing so, a young man approached me and asked if I would mind speaking to him for a while, giving him the opportunity to practise his English. I happily agreed and he introduced himself as Duan. We spoke at some length, mostly on the subjects of Vietnam, travel and my trip. He noted that I was travelling alone, which he said was quite brave.

This was the first of two statements he made which, while essentially quite simple, actually caught me a bit by surprise. In speaking to him, I was forced to properly think about my answers for the first time, and the process led to some answers I hadn’t expected. I’ve been told before that I’m being brave to travel and live overseas alone. In this case, however, I remembered a quote by John Wayne: “Courage is being scared to death and saddling up anyway.” As I explained to Duan, I don’t consider travelling alone to be especially courageous because it doesn’t scare me. Whether that is from naivety or experience, I’m not sure.

The second statement he made was that it must be lonely to live and travel so far from my friends and family. Initially, I said that I’ve lived overseas for nearly a decade, so I’m kind of used to it by now, but it’s a statement that stuck with me for the rest of the trip. Some days later, I realised that this wasn’t the real answer. I thought about the events during just this one day; about the kindness of my friend of a friend, the simple fact that Duan had come up to speak to me, and my interaction with the little girl. It all showed that I am constantly surrounded by lovely, friendly, kind people. We all are. That, as you will see in coming posts, became something of a running theme on this trip.

After Duan continued on his way, my note-taking was interrupted again (kind of demonstrating my point) by a couple of young girls. One asked if they could practise their English with me and, once again, I happily agreed. She didn’t ask anything as thought-provoking as Duan had and her friend barely spoke at all, being too shy. They did both ask for a selfie with me, though, and agreed to let me take one on my phone, too.

For one night only

I finally returned to my accommodation for the night but, while climbing up the stairs, an old lady asked to see my passport. I went up to the room to collect it and she stood inspecting it at some length. This, it turns out, was the owner of the building. I discovered this when her English-speaking daughter arrived a few minutes later, followed by the daughter’s Irish boyfriend. Between them, they explained that I wasn’t legally allowed to stay in the apartment without my friend’s friend being there since it constituted a change of occupancy and the landlady was obliged to inform the authorities of that fact within 24 hours.

I offered to go looking for a guesthouse, even though it was already quite late in the evening by this point. However, after I’d explained that I was planning to leave the next day, they agreed that I could stay the night. I had arrived quite late in the afternoon and would be gone again within the 24-hour limit. While the authorities are apparently fairly proactive in checking this kind of thing, the timings meant it was unrealistic for the landlady to have had the opportunity to notify them sooner. Fortunately, there was no police raid that night and I slept peacefully, leaving early the next day.

You now see why I have being vague about the identity of my friend’s friend and the location of her apartment in this and the previous part?

Even though this experience disconcerted me a little, I see it as a positive one. Even though there was a very real threat that she could lose her business license, this lady took a gamble on this complete stranger – me. It was the first example of the immense kindness and generosity I encountered throughout my time in Vietnam.