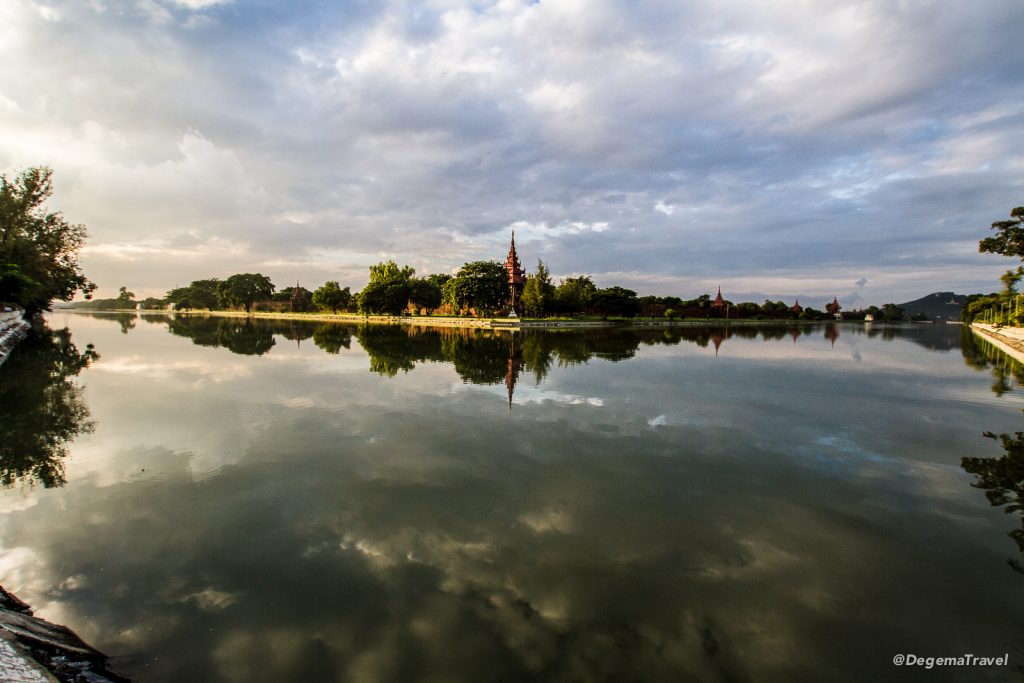 Mandalay: Not the Venice of the East

I ended my post about Bagan with the iconic words “the road to Mandalay”. I say “iconic” because I can think of at least two songs which feature those words prominently, most notably the Robbie Williams song of the same name. Admittedly, the song has very little to do with the second-largest city in Myanmar. Now I know why.

We arrived in Mandalay late in the afternoon and were all pretty tired, so we put off exploration, deciding to rest in our hotel. Eventually, we headed out to look for something to eat. We utterly failed, in this regard. The grid of roads around our hotel revealed only more hotels, a couple of decidedly dodgy-looking streets, a small market selling anything except food and a few motorbike repair shops. Defeated and increasingly tired, we returned to the hotel and ate at the restaurant there.

The following day, we went out to explore all that the city had to offer. This turned out to be staggeringly little. At the heart of the city is Mandalay Palace – the home of the last of Myanmar’s royals. Or, I should say, a recreation of same. That is, unless the buildings of 1857-59 had access to corrugated metal roofing and cheap gold paint. The palace is at the centre of a perfectly square island, surrounded by old walls and a moat. Only the palace and one road leading from the eastern gate to the palace are accessible for tourists, and you have to go through quite a thorough military checkpoint to access even that much. The reason: the rest of the island is a military base.

The palace shows all the signs of having been constructed by the military authorities. They used the cheapest possible materials, the cheapest possible labour and showed no interest in making any of it historically accurate. Most of the buildings – and there are a fair few – were completely barren on the inside and showed obvious signs of neglect on the outside. It was a massive disappointment and I cannot adequately recommend enough that you avoid it completely.

Our next stop – Mandalay Hill – was considerably more interesting. At its peak is Sutaungpyae Paya which, despite being yet another pagoda, had some beautiful mosaic walls and gave a fantastic view across the city. At this point, I realised that this was not the splendid city I had imagined. From further reading, I gather that it was, for a short time, deserving of its magical notoriety, but much of it was destroyed during the Second World War. Afterwards, it was very rapidly and very shoddily reconstructed in a very practical but very dull grid network of wide roads and blank-faced concrete buildings.

Some of its impressive history did survive the ravages of aerial bombing and two major battles. One such place was next on our list – Kuthodaw Paya. It is home to the world’s largest book, though calling it such is kind of stretching the definition of what constitutes a “book”. If, by book, you mean only a collection of surfaces covered in text, then the 730 double-sided engraved tablets (each with its own private pagoda) gives you an impressive total of 1,460 pages. The inscription isn’t that big, either, so each page contains about 80 to 100 lines of text. In that regard, it probably counts as the largest book both in terms of word count and the amount of space it covers.

Moving on, our taxi driver took us to U Bein Bridge. Another world-beater, it is thought to be the oldest and longest teakwood bridge in the world, built in the mid-1800s and spanning a little over 1.2 km (about three quarters of a mile) across Taungthaman Lake. Despite its age, it is pretty sturdy, though you still need to be a little careful on the uneven surface. As impressive as the bridge is, we decided against walking a roundtrip total of 2.4 km, choosing to walk only a short distance out and back.

And that was it. We headed back to the hotel and ate there, having run out of energy and interest in the few attractions Mandalay had to offer. The following day, Noom and Nan went off to check out some more pagodas before heading to the airport as they had to fly home one day before me. I spend most of the day resting before finally deciding that I had to find an alternative to the hotel restaurant. I checked online and thought that the pathetically short list of nightlife and restaurants must be because the site was outdated. Turns out it wasn’t – there really is that little to do after dark and that limited a selection of places to eat! I was going to check out the traditional puppet theatre, but I got there just after a showing had ended. There was about a three-hour wait for the next one and, not being able to think of anything at all that I could do in Mandalay for that amount time, I called it a night and went back to the hotel.

There was one other interesting site which I saw in Mandalay, but it’s a bit of an odd one. This city was an important stop on my pilgrimage of remembrance for my grandad – my own Operation Longcloth. I therefore visited Mandalay General Hospital which, fortunately, was just down the road from my hotel. Doing so on 11th November – Remembrance Day – gave it a certain extra poignance.

One of the relatively few war stories I know from my grandad is that he was among the first people ever to receive an epidural. While this is now a common painkilling treatment for pregnant women, it was first tested on wounded soldiers. Towards the end of the war, my grandad took a bullet to the foot and had to get a skin graft to patch up the hole. To reduce the pain from taking the skin off another part of his body, they gave him an epidural, which proved to be successful. This was administered at a hospital in Mandalay. Unfortunately, Mandalay has many hospitals, but I chose to assume that it was the Mandalay General – partially because it was closest.

Not only was it nice to have a direct physical connection with my grandad and his war service, but there was also a mother holding her cute little child just by the entrance when I was taking pictures of the hospital. The kid kept saying hello, and I turned around to say hello back before snapping a couple of pictures. It’s a silly thing to think, but the fact that epidurals are now used in childbirth did sort of strengthen the connection I felt. I don’t believe in reincarnation, but it was a little like saying hello to Grandad.

The following day, I took a taxi to the remarkably grand and impressive Mandalay International Airport (MDL) for my flight home to Thailand.

Posted on11 December 201613 June 2019  |  Leave a comment on Mandalay: Not the Venice of the East TagsMandalay Thailand