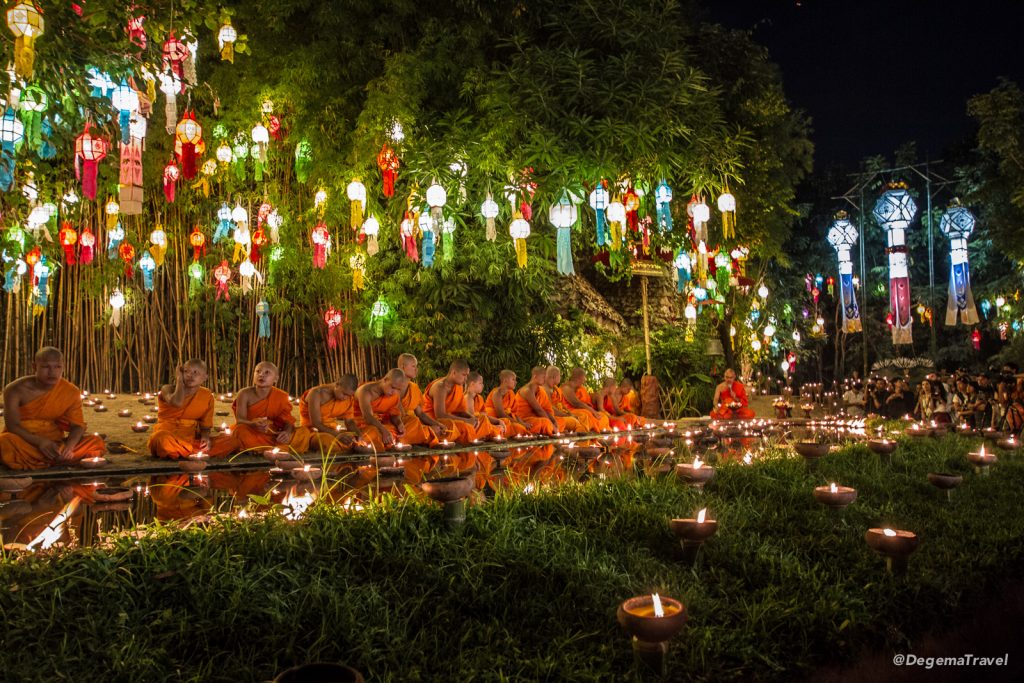 Those of you following me on Instagram will know that I was recently celebrating Loy Krathong in Chiang Mai. What is already quite a magical festival – Thailand’s own ‘festival of light’ – was made that much more amazing simply by the fact that it was taking place in the capital of the north. Quite frankly, everything is better in Chiang Mai and it is undoubtedly my favourite part of the country.

To be fair to the rest of Thailand, Loy Krathong isn’t just Loy Krathong in Chiang Mai, but is also Yii Ping. It is effectively the same thing, just as Pattaya’s Wan Lai is functionally identical to the famous nationwide Songkran celebrations. In much the same way, Yii Ping’s main impact on the festival is the lengthen it, from a one-night thing to three nights.

What is Loy Krathong?

The name Loy Krathong (sometimes written as Loi Krathong) usefully translates to ‘float a krathong’. There isn’t really a translation for krathong – it’s simply the name for the thing you set afloat during the festival of the same name. It’s a kind of decorated basket, generally made of a slice of banana tree truck and leaves, containing a candle, a couple of joss sticks, flowers and a few coins as an offering to the river spirits.

There is no clear agreement on the exact origins of the festival, though I’ve heard that it was probably from the northeastern part of Thailand – the Issan states. On the full moon of the 12th lunar month of the traditional Thai lunar calendar (so, usually in November of the Gregorian calendar – the 3rd November in 2017), people release scores of floating baskets onto pretty much any body of water (though it was traditionally rivers), sending a wish or prayer off with them.L

​​Of course, the magical effect of this beautiful festival is somewhat lost in the coastal settings of places like Pattaya or Phuket, particularly in November. With the low season in its death throes, making the seas pretty rough, quite a few of the glittering and glowing krathongs are immediately wiped out by the waves. The beaches of Phuket’s west coast are subsequently covered in destroyed floats and shattered prayers.

What is Yii Ping?

Also written as Yi Ping, Yee Ping or even Yi Peng – because it is surprisingly difficult to Romanise a Sanskrit-based language – Yii Ping translates as “full moon day” and is a celebration of the second month of the Lanna lunar calendar, which is specific to the Chiang Mai area and the historical (and beautiful) Lanna culture.

By sheer coincidence, the festival also involves floating lights, but was traditionally a time to release the sort of floating lanterns which take to the air, not the water – called khom loi in Thai. According to the monk I heard explaining the history of the event, the collision of the two cultures in centuries past resulted in the realisation that the two festivals are functionally identical, so the powers that be just combined them into one.

I was invited to celebrate this charming and extremely romantic event in Chiang Mai by one of my best friends in Thailand – Khun Ya. An exceptional photographer, she showed me one picture of the special ceremony held at Wat Phan Tao, in the heart of the Old City, and I immediately booked my flights. The fact that she said this is supposedly going to be the very last event of its kind at the teak temple spurred me on more.

The special Loy Krathong ceremony at Wat Phan Tao generally starts around 8pm, once the sun has very firmly set. However, I arrived at the temple at 4pm, along with Ya, another Thai friend of mine who randomly happened to be in Chiang Mai at the same time (her husband was attending an SEO conference) and an extremely skilled landscape photographer who lives in Phuket, who I knew by reputation but not in person. An Italian named Joey Santini, he provided some interesting insights and tips, was a genuine pleasure to talk to and is an exceptional snapper – I strongly recommend checking out his work!

All in a Day’s Work

Despite arriving at such a ludicrous time, we weren’t even the first there. Already, by that time, a handful of tripods had been set up astride the barrier separating the narrow public area of the temple from a small artificial pond, with a patch of sand and a Buddha statue on a pile of rocks on the far shore. There we waited…

Four hours passed. Half a working day – a point which was especially significant to me as I’d used my last available day of paid annual leave to be here. All we did was stand there behind our own tripods, protecting our prime patch right by the pond. This decision did end up being entirely justified, though, and Ya was right to bring us there so early. All of the best spots were taken by about 5pm and, by 6pm, the entire public area was packed with people.

In over five years of living in Thailand, I have been to quite a few Buddhist ceremonies, including two weddings, two funerals, a ground-breaking ceremony and an unknown number of festivals. In each case, I must admit, a certain amount of the significance of the circumstances is lost on me simply because I can’t understand what’s going on. Add the fact that I was pretty focussed in on taking the best pictures possible and much of the ceremony went completely over my head.

From what I saw, a lot of candles were lit (quite a few being subsequently blown out by the wind), a load of saffron-robed monks came out and prayed towards the Buddha statue, then they moved to the shore of the pond, prayed some more, floated some simplified krathongs on the water, then floated some khom loi on tethers (apparently they weren’t allowed to properly release them in the Old City as it would interfere with flights from the nearby airport).

Frankly, the tourists who nearly burnt down the temple by releasing a lantern a little close to a tree and the stray dog which calmly came and sat among the monks distracted me very easily because I could more easily understand those events. I’m not saying it wasn’t a beautiful, magical ceremony but, between the pain in my knees, the scrum of photographers trying to shoot around me and the inadequacies of my language skills, a lot of the mystique was lost on me.

With all of our brains now completely fried by fatigue, our party split up. I went off with Aom (the aforementioned friend) to light some lanterns of our own, first in the grounds of the temple and then, after dinner, at the imaginatively named Sapaan Lek – literally Iron Bridge.

For some reason, this narrow metal bridge is ranked as one of the city’s main attractions. Having crossed it on a previous visit, I was supremely underwhelmed. However, on returning during Loy Krathong in Chiang Mai, I can see the appeal. Locals and a few tourists were releasing hundreds of khom loi, which floated away to the south on the gentle breeze. It seemed like the stars were streaking past, which is quite a dizzying sensation.

Despite having been on my feet for about six hours by now, and my knees and feet being in agony, I found it surprisingly moving to take part in the festivities. I released a khom loi with Aom, all the while wishing that I was there with my girlfriend because it is such a romantic experience. While the Wat Phan Tao ceremony may not be a feature of future festivals, I would strongly recommend anyone visiting Thailand during November to make sure they spend Loy Krathong in Chiang Mai. While my description of the festival is profoundly inadequate, I hope that my photos will allow you to share in the wonderment I felt.