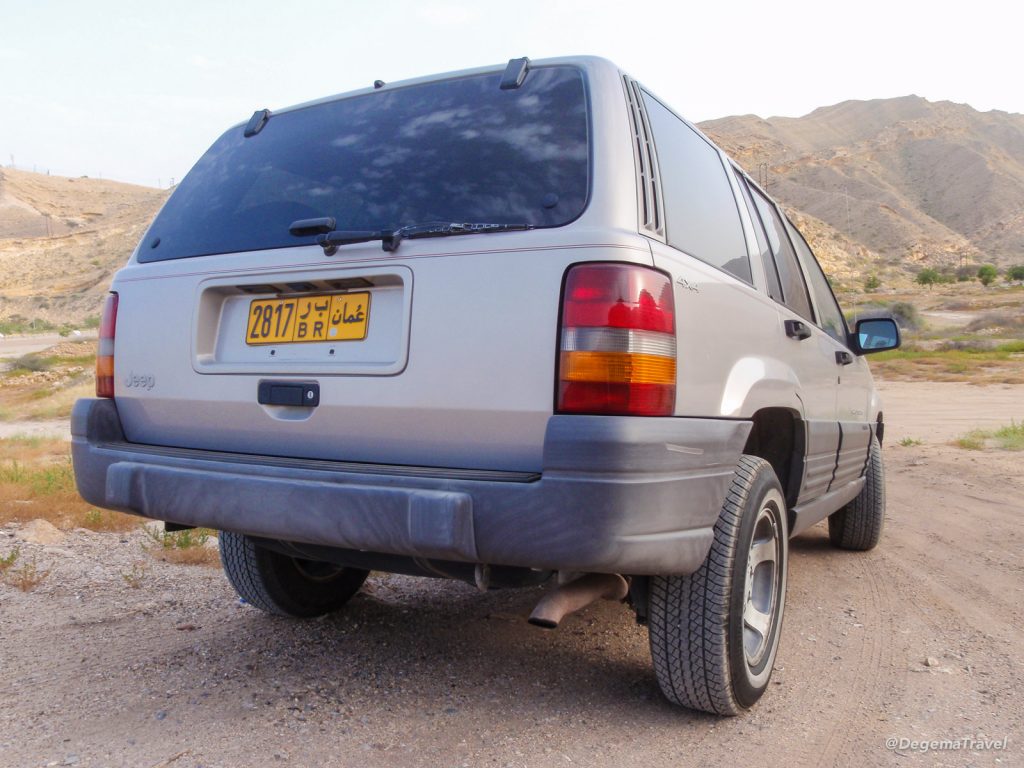 Lady Macbeth and the Beach of Doom

A few years ago, someone asked me what was my funniest memory from my time living and travelling overseas. It was an excellent question, and one which I struggled to answer because my brain tends not to retain the good memories (I’m a natural-born pessimist). It was a question which actually partially led to the creation of this blog as I realised that I needed some place to document and share the good times. However, the answer I gave to the questioner was the following story, which is also the second part of The Adventures of Lady Macbeth.

The story starts just a few weeks after I bought the Lady – my 1997 Jeep Grand Cherokee Laredo – while I lived in Muscat, Oman. Within a week of buying it, it had already had to go to a mechanic to replace the radiator matrix, so I wasn’t exactly filled with confidence about its reliability. However, I had the weekend free and grand dreams of seeing the galaxy.

Walking on the Milky Way

My travel plan was based on a single thought – seeing the Milky Way. I have only had this delightful experience a few times in my life, one of which was on a beach near the town of Al Ashkharah, on the east coast of Oman. I had been sent there to report on a major kitesurfing event, which proved to be one of my most miserable days. I wasn’t that interested in the sport, at the time, and I’d been extremely foolish in dressing for the day in office attire, which isn’t a lot of fun when you’re sat on a beach for hours on end! The evening, however, provided some redemption as that part of the country is extremely thinly populated. With no light pollution, the stars of the Milky Way formed a vivid stripe right across the night sky.

In addition, I wanted to put Lady Macbeth to the test and try driving her on sand. A short time before this trip, I’d done a “News You Can Use” article on exactly that topic, speaking to the owner of a desert camp and to the manager of Outward Bound Oman, both of whom had given me some valuable tips. The plan, therefore, was to drive down to the beach, enjoy and photograph the night sky, set up a little one-man tent I’d bought for the occasion, maybe have a swim in the Indian Ocean, then either mooch about the area for the weekend or drive home satisfied – I hadn’t really planned anything beyond that first night.

After finishing work on the Friday, I headed straight off along the coast road towards Sur. I’d been there several times for work already and the route was pretty simple. From there, I kind of guessed the rest of the way, sticking to the coast as much as possible. Bear in mind that I bought Lady Macbeth on 31st March 2010 and these events would have been not long after that. In-car GPS systems weren’t that widespread at the time and even less so in Oman, where the production and distribution of maps was quite heavily controlled. Google Maps did exist, but smartphones were not as prolific as they are now (I certainly didn’t have one, anyway). However, as Oman has less than 30,000 km of paved road in a country slightly bigger than the UK, it’s not like I could get lost, even if I tried.

After a couple of stops along the way to take a few photos of the striking coastal cliffs, I reached…well, it’s not really accurate to call it “my destination” because I didn’t know exactly where I was or, for that matter, where I was going. Let’s say that I found a place which looked good and seemed vaguely familiar from my previous trip to the area. That’s when I made my first mistake.

The spot I found was clearly popular with people very much of my own mind. There was quite a clear track off the road and towards the beach, with ruts formed by passing wheels visible in the sand. Full of excitement that, after about three hours of driving, it was finally time to test my off-roading skills, I turned straight onto the sand. I’d gone barely 25 metres when I ground to a halt. I immediately panicked and tried to reverse. I just about got some traction and started moving when I had my second bright idea. I decided to try to pull a three-point turn so that I could drive back to the road in forward gear. Within minutes I was absolutely, well-and-truly stuck.

At this point, Lady Macbeth also started to panic. In the hope of getting out of this ludicrous mess I’d got myself into, I was revving hard in the vain hope of getting traction. With no air moving through the radiator, the engine was overheating and the warning light had just lit up. With the memory of the engine cutting out on the highway in Muscat still fresh in my mind, promptly joined by the mental image of the bill I would get for calling out a tow truck to a beach three hours’ drive from Muscat, I switched her off and let her cool down. In my rush, I had left the automatic gearbox in Drive. For those who don’t know, you can’t start a car in Drive – it won’t let you because of the risk of you accidentally driving into something or someone. Not knowing this, at the time, I assumed that I’d broken the engine. That’s when I really panicked.

Generally speaking, I’m not a panicky sort of person. In a difficult situation, I mostly remain calm, think through the various options and solutions available, try each one in order and remain pragmatic about it throughout. I know that there is always a way out. In the worst-case scenario, it’s very unpleasant and expensive, but there is always a way. To my recollection, there has only been one time when I completely lost my cool and this was it (yes, this is still the story I told my friend was the funniest so far). I got out of the car, fell to my knees on the sand and screamed as loudly as I could. It didn’t help.

One of my favourite books in the world is the autobiography of veteran BBC foreign correspondent Kate Adie, entitled The Kindness of Strangers. It’s not actually that well-written as there are entire sections which I read and completely failed to absorb, being badly presented and boring. However, the fun bits make up for it and the story it told has been quite a major inspiration in my life. The title, especially, has always resonated with me. Like Adie, I have been fortunate enough to encounter the kindness of absolute strangers, stepping out of obscurity when I needed them most, asking for nothing in return and then disappearing back into the crowd, as though saving my life was no big deal. That’s what happened on that beach, miles from anywhere, when I was at my lowest.

Through the tears welling up in my eyes, I saw the glimmer of a pair of headlights on the otherwise completely deserted road through the middle of nowhere. I quickly ran out onto the road, caked in sweat and sand, waving and shouting for them to stop and, by some miracle, they did! Three young-ish Omani guys jumped out of the battered old pick-up truck. I was over 200 km from Muscat, well away from any major town, and my knowledge of Arabic stopped at “do you speak English?” However, by another miracle, they spoke English – really well, if memory serves. Croaking, my throat having been battered by the scream, I explained my problem. With barely a word, they walked right up to Lady Macbeth and started working on getting her off the beach.

When I was at university, studying journalism, one of my tutors explained to the class that the nature of the job meant that we would need to become an expert in any number of diverse subjects, learn everything about it, then immediately forget it all as soon as the article was written and published. Sure enough, as a general features writer, I have learnt about all sorts of weird and wonderful things and then forgotten a lot of it to make room in my brain for a new story. This included all of those basic lessons about driving on sand, which I’d literally only just written about, the first of which was to reduce the pressure in the tyres to increase the amount of surface area in contact with the sand, increasing grip. That was the first thing my saviours did and, after rocking the car on its suspension a bit and putting her in Neutral so they could start the engine, they drove her off the sand with ease.

The guys seemed profoundly indifferent to my gushing gratitudes. They just said that I’d need to get the tyres pumped up again if I was going to drive on tarmac roads, jumped on their truck and started driving away. They’d only gone a few metres when they stopped again and called back to ask if I had any beer. I didn’t, so they drove off. I have absolutely no idea who they were, what their names were, where they were going or where they were coming from. Whoever they were, they saved me from my own stupidity that night.

Unfortunately, that night of chaos and stupidity was only just beginning. It was only about 8pm by this point – still plenty of time to screw even more things up. However, this post is already too long, so I will have to save the rest of it for Part Three. Until then, I will leave you with the rather unflattering cartoon of the event, which was published in the Muscat Daily “Reporter’s Diary” section (where we documented the various funny stories our team encountered) on 27th April 2010. Incidentally, one of the other stories – the one about a reporter learning the wrong kind of Arabic – is also about me.