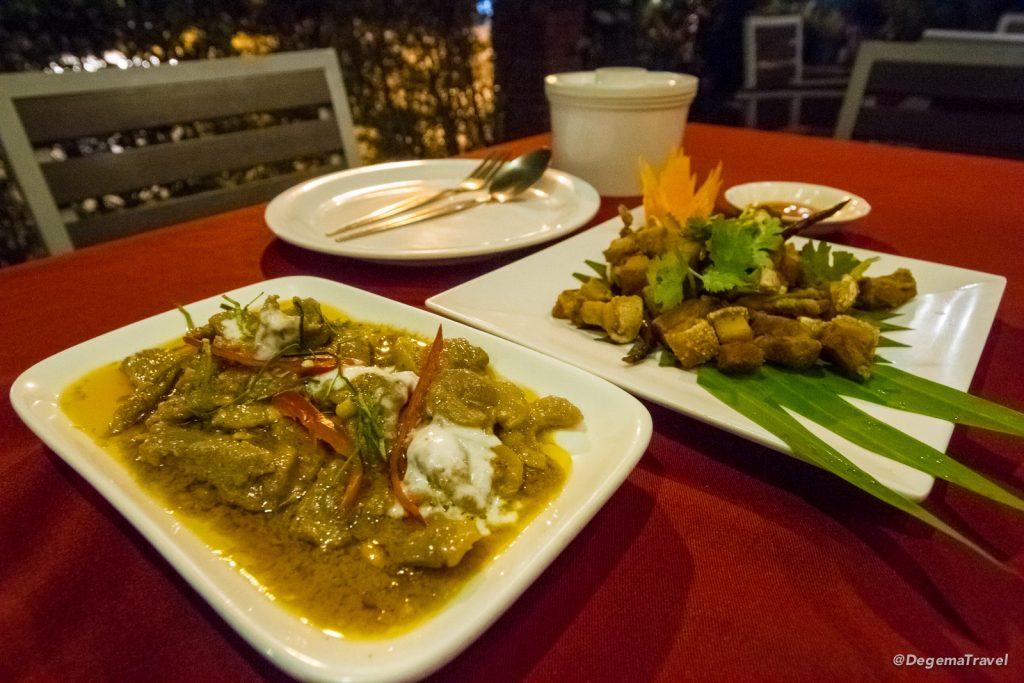 Reviewed on 23rd June 2016. Details may become inaccurate over time.

To be absolutely honest with you, I chose Kaab Gluay Restaurant as the first restaurant review on this site purely because I was in urgent need of a food photo for my Project52. This place happens to be pretty close to my apartment and, while I’d never previously eaten there, it has a good reputation. I also messaged my Thai friend at Traveliss.com for advice and it was her first suggestion, too.

There was one slight backfire in my plan, though. I accidentally put my thumb right in the middle of my lens, adding a smear where I needed it least. That’s why most of the pictures look a little off, with the light being distorted by my thumbprint.

Let’s get right to the point with this. Naturally, the most important part of a restaurant experience is the cuisine. Being in Patong – the main tourist resort in Phuket – and having most of the signage written in English, there is a chance that the restaurant is slightly tourist-oriented and that the genuine Thai flavours have been adapted for tastebuds not used to the intense flavours the locals like. However, the clientele are mostly locals, so obviously the tastes haven’t been adapted that much. The prices are a little higher than, for example, street food vendors and the sauces are noticeably richer, making this slightly higher-end Thai food.

The menu is quite a decent size, with soups, starters, salads, curries, various chicken, beef, pork, squid, fish, crab, prawn, vegetable and other assorted dishes, as well as desserts and drinks. There are no international options – only Thai – which is quite a gratifying thing to see in a restaurant. I would always rather a place did one thing well than try to do everything and do it all badly.

I had the signature cocktail, Kaab Gluay Delight, which is indeed delightful for 150 baht. It has a very fruity flavour and, despite a green-ish colour, it really does taste quite like banana. I should probably have mentioned earlier that “kaab gluay” is Thai for ‘banana leaf’. I couldn’t quite place the alcoholic ingredients, but it certainly had a kick to it. It could have done with some salt on the rim of the glass to offset the sweetness, instead of just a cherry and a cocktail umbrella.

To eat, I went for the ‘duck with thick and creamy curry sauce’ (190 baht) and deep-fried crispy streaky pork with salt (125 baht). The pork tasted rather like crackling (it’s possible that only Brits will get that reference), probably because that’s exactly what it was. The curry, meanwhile, was quite mild but full of flavour. The sauce was creamy and the duck was tasty and tender. The cocktail wasn’t a great choice of accompaniment, if I’m honest – one of the 65-baht local beers would have worked better.

Kaab Gluay Restaurant’s look is quite a simplistic one, but not in a ‘barely-decorated shop-house’ kind of way. It has stylised bare-brick walls with wood decking and brushed concrete floors. There is an indoor air-conditioned dining room, but the air is nice in the evenings and it is a great shame to lock it out instead of enjoying the outdoor seating. It’s all roofed over with an almost European-style look of exposed beams and whitewashed ceilings.

A pleasant atmosphere is created by the almost excessively friendly staff. The charming girl who served me perhaps didn’t have the best ability with English, but it didn’t create any major problems. Everyone was very welcoming and happy to help.

This is perhaps Kaab Gluay Restaurant’s biggest flaw. Frankly, the location couldn’t really be much worse. Quite far from the beach in Patong, it is on the wrong side of a very busy road. The design of restaurant and décor means that the traffic noise and smog isn’t too bad, but getting in and out is a little challenging.

There’s a guy at the front with a high-visibility vest, a red light baton and nerves of steel (as well as other ferrous body parts). He will step out into traffic, in front of the famously reckless minivans, to help you cross the road. He deserves a healthy tip, if not a medal.

Proper genuinely Thai tastes are relatively hard to find in Patong as the place is mostly geared towards foreign tourists. Kaab Gluay Restaurant stands out as a great local restaurant, enjoyed by tourists and Thais alike. The choice of dishes goes well beyond typical Phad Thai, chicken with cashew nuts and beef in oyster sauce, reaching into options normally only found in little family outfits with incomprehensible (or non-existent) menus. The prices are not the cheapest in town, but are not staggeringly expensive either and are entirely justified by the quality of the preparations and ingredients. I very much enjoyed my meal there and I think you will, too. Just be careful with crossing the road when you’re done.

I did not arrange this review in advance, the staff and management had no prior knowledge of me or my work and I paid the bill myself. I have no personal or professional relationships with anyone working there.