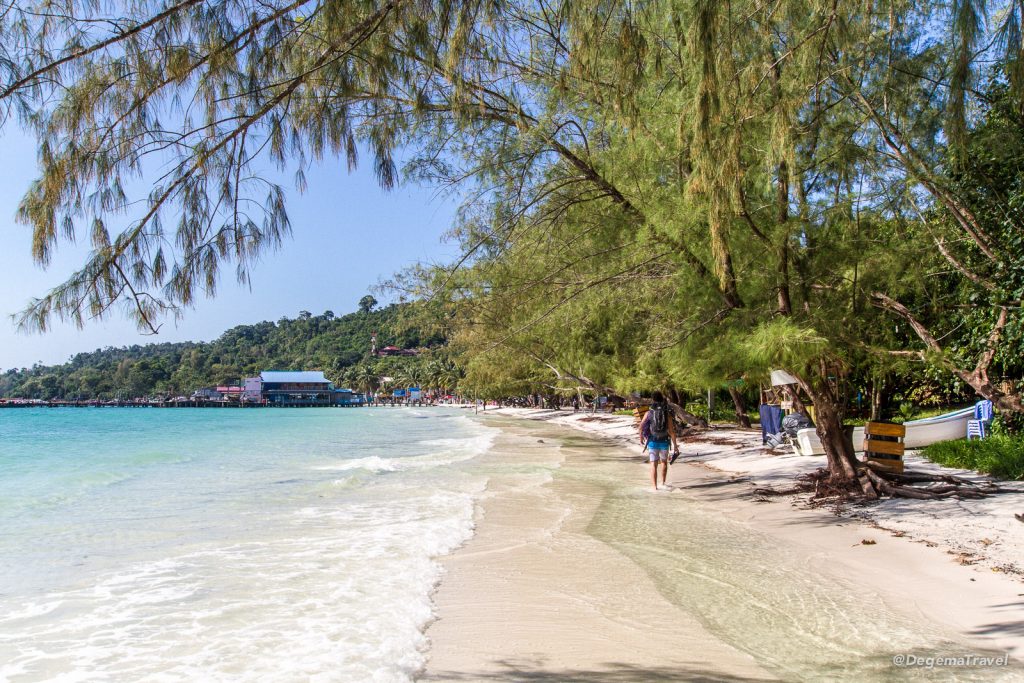 About four months ago, I was researching everything there is to know about Koh Rong – a tiny tropical island off the coast of Sihanoukville in Cambodia. While this was initially a work project, the information I found suggested that the place was very much like Koh Phayam in Thailand, which I had very much enjoyed visiting earlier this year. Realising I’d used virtually none of my annual leave up to this point, I decided to check the place out and have a week’s holiday there in December.

This proved a little more challenging to organise than expected. I didn’t much fancy wasting entire days of my journey crossing Cambodia from Phnom Penh to Sihanoukville in a bus. While this would have been the cheaper option, it would have cost me the one thing I am constantly chronically short of: time. Instead, I was determined to fly into Sihanoukville International Airport. The challenge was finding a route there from Phuket. There are surprisingly few flights into or out of the Cambodian coastal city and the only practicable one I found involved me flying via Kuala Lumpur, about an hour in the wrong direction.

No good journey ever starts at 5am – at least, not for me. I am not, by nature, a morning person. However, with an 8am flight to catch, a 5am start was required. At Phuket International Airport, I was immediately presented with my first obstacle. As my flights were with two different divisions of AirAsiaand the website hadn’t made it obvious how to book a fly-through ticket, I had been forced to make two separate bookings. Technically, therefore, I would have to pass through Immigration and actually enter Malaysia, only to turn around and check right back in. Fortunately, this ended up being unnecessary thanks to the magic of mobile check-in, airport WiFi and the fact that I had no checked baggage.

On the flight from KL to Cambodia, I was sat next a Singaporean guy, who randomly decided to start talking to me. It turned out that he ran some kind of a wellness retreat in Sihanoukville and he asked me for some advice on marketing, which I gladly gave. He asked more general questions too, including about my travel plans in Sihanoukville. When he discovered that it was my intention to get a taxi from the airport to Serendipity Pier in order to get a boat to Koh Rong, he immediately offered me a lift. For some reason, I long ago completely forgot the sound advice to never accept lifts from strangers, but I have always had pleasant experiences as a result.

As I arrived at the pier, I bid my new friend farewell and went to basically the first counter selling boat tickets. They offered me a round-trip ticket on a speedboat for US$22, which seemed fair. Even better, the outbound boat was leaving literally that moment, so I dashed down the pier and joined the queue of carefully embarking backpackers. About 30 minutes later, we disembarked equally precariously at Tui Village on Koh Rong.

As I was walking along the beach, heading in the direction I hoped my hotel was in, I was hailed by a rather scruffy looking backpacker at a large information booth. This, he declared, was a free service offered by a group of backpackers throughout the day. He and his colleagues would pro-actively help travellers as much as possible, presumably in the hope that they would buy a T-shirt or a tour or something from them. I never made a purchase, but I did appreciate the directions and they are worthy of mention just for their kindness.

When researching Koh Rong, I had set out a modest selection of objectives. Firstly, I wanted to see, photograph and enjoy the relative isolation of the beaches, which all accounts said are beautiful. Secondly, I wanted to see (and, hopefully, also photograph) the bioluminescent plankton, which is supposedly visible on very dark nights. Finally, I wanted to sample the nightlife, which is why I was staying at Tui Village instead of one of the quieter, more remote beaches around the island.

This, it turns out, was a profoundly dumb plan. The first objective immediately fell flat because I had failed to factor in one very important point: I live in Phuket. I hadn’t previously realised it, but beach holidays no longer hold any real attraction for me. I live on an island famous for its beaches. Travelling all the way to Koh Rong just for its sandy shores is like travelling all the way the UK to visit a famous Thai restaurant. Why go so far out of my way for something I can get at home?

That’s not to say the beaches aren’t stunning – they are, as I hope my photos are showing. The sand is the whitest I have ever seen, to the extent that it almost looks like snow. Supposedly, this isn’t even the nicest beach on the island. I was told that Sok San Beach (also known as Long Beach, 7 km Beach or Southwestern Beach, because apparently whoever names these things isn’t very imaginative) is even more beautiful and more natural. However, white sand and clear seas stop being a novelty when you’ve seen them every day for the past three years.

Alone in a Crowd

The bioluminescent plankton also proved to be a disappointment. My research had given me the impression that the beach literally glows on a dark night, mostly thanks to the lack of light pollution. However, that article must have been written a long time ago because light pollution was pretty much endemic and inescapable. My initial foray on foot revealed absolutely nothing. I followed this up the next day with an organised boat trip and discovered that, while there is indeed glowing plankton, it is only found out at sea, when you agitate the water. As charming as this was, I had mostly wanted to see it in order to photograph it. It is impossible to photograph barely glimmering lights in a pitch-black sea while hand-holding a camera on a moving boat.

Finally, the nightlife. Again, I had failed to factor in a psychological obstacle: I am a social drinker. I don’t like to drink alone and I don’t like to go out partying on my own. Had I visited the island with a travelling companion, I have absolutely no doubt that I would have had a blast most evenings. Instead, I went to bed pretty early most days and read a book or watched YouTube videos on my guesthouse’s intermittent WiFi.

That’s not to say I had a bad time or that the nightlife on Koh Rong isn’t good. I was actually perfectly content and happy to have a good rest. I’m sure the backpacker crowd on the island would have been perfectly welcoming of a stranger, but I felt no great urge to go to the effort. If I ever feel the need to return to the island, I will certainly do so with a companion of some sort and, in that event, I’m sure the modest nightlife of Tui Village will prove enjoyable.

My trip had been planned in two parts. Over the six days I would be in Cambodia, three would be spent on Koh Rong and three on the smaller neighbouring island of Koh Rong Sanloem. The day before the move, I went scuba diving from Koh Rong, but most of the best sites are around Koh Rong Sanloem.

This was my first dive in a staggering two years. It amazed me that a hobby I had once passionately enjoyed had been neglected for so long. I very quickly got back into the swing of it and remembered everything I loved about it. Sadly, the visibility underwater was very poor and none of the photos I took were really good enough to share. Even so, it was a very pleasant experience and the guys at Koh Rong Dive Center were very professional and friendly.

That evening, I had a couple of beers and a moment of quiet contemplation at Skybar, which is the highest point in Tui Village. Once you’ve recovered from the extremely steep and uneven stairs up there, you can enjoy quite a pleasant view over to Koh Rong Sanloem from the bar. In my moment of contemplation, I realised that the view did not move me. I was not wowed by it, even slightly. Again, I fear that my years of living in Phuket have immunised me to such tropical beauty. I realised that, in future, I would need to choose my travel destinations with much more care.

I paid my bill, went back to my guesthouse and packed my bags for my onward journey. My time in Koh Rong Sanloem was significantly more stimulating, but you’ll have to wait for the next post for that!