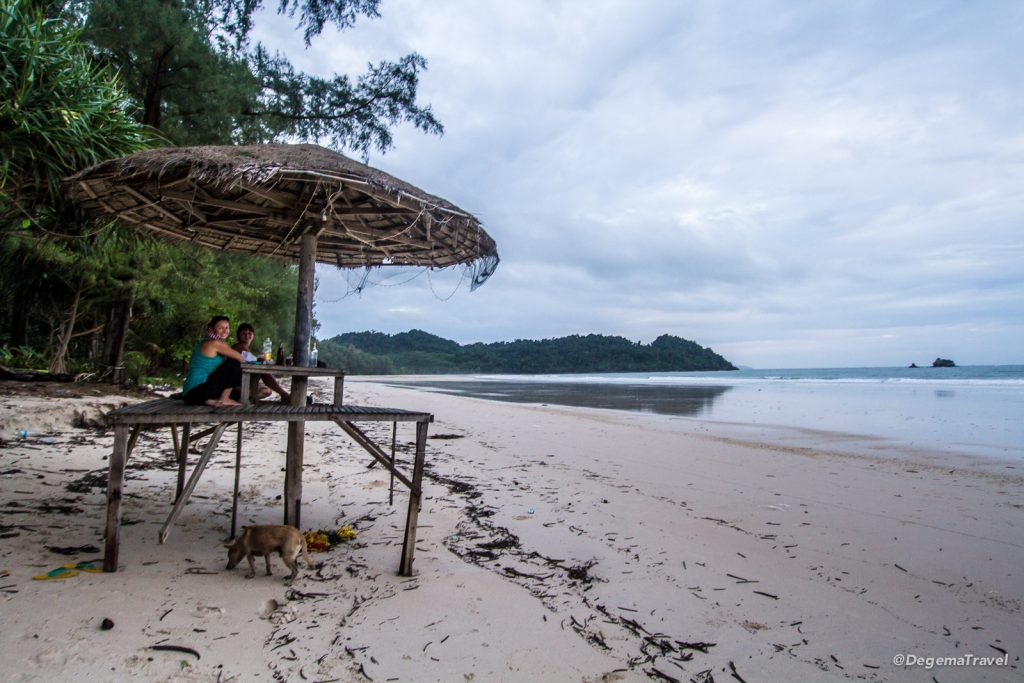 Koh Phayam is a tiny tropical island at the very southern tip of Thailand’s western border with Myanmar, near the city of Ranong. During the fabulous weather of the high season, it is an increasingly popular destination for sun-seeking backpackers, keen to enjoy a budget getaway on an unspoilt paradise. Unfortunately, it is currently the quaintly titled “green season”, better known as the low or rainy season, for obvious reasons.

In spite of the less-than-ideal circumstances, I really needed a break. With a build up of stress from various quarters, I needed a hard reset to clear my head, allowing me to start reorganising my weekly routines from a clean slate. In that regard, rain or shine, I cannot praise Koh Phayam enough as the perfect place to get away from it all. If anything, it is even better in the low season than high!

With a Little Help from my Friends

The exact timing of my trip, which lasted from last Sunday (25th June) to Wednesday (28th), was primarily down to my friend Malinda. Having met through CouchSurfing while she was looking for information about Pattaya, we met in real life some time in 2012 and have been friends ever since. A committed traveller and teacher, she left Thailand about three years ago to live in Costa Rica and explore Central America. However, she made a return trip to the Land of Smiles to see old friends and to visit Myanmar, where she is even as I write this. With the chance of seeing such a valued friend again, she could have suggested holidaying in a septic tank and I’d still have willingly booked the time off work!

Malinda had visited Koh Phayam once before, during the high season, and had dubbed it her favourite part of Thailand. The atmosphere is almost pathologically laid back. Even the street dogs are surprisingly easy-going, by Thailand’s standards, as well as looking quite healthy and well looked after. The super-friendly and easy-going way of doing practically everything allowed Malinda to acquire some really astounding travel stories, including spending her first night there in a hostel so ropey that, when she pointed it out to me, I joked that even Norman Bates would have turned his nose up at it! Accommodation-wise, it could be said that the only necessities are four walls, a roof and a mattress. Well, it certainly had a mattress and a roof, but only about 2.5 walls!

Getting There and Around

After having spent a night in the rather bleak and boring town of Ranong because there are only a few bus services there from Phuket and they all arrived at bad times, I met Malinda at the Ranong ferry terminal the next morning. Calling it a terminal is actually rather generous, since it’s just a small pier on a river, surrounded by a bunch of speedboat booking offices and surprisingly little public transport. We were told that the slow ferry (200 baht for a two-hour journey) does not run in the low season and, while we didn’t believe it for a second, the speedboat option was only slightly more expensive (350 baht) and considerably quicker (30 minutes), so we took it and did our best to catch up over the roar or the two big outboard engines. Sure enough, we later found that the ferry does indeed run year-round, though with fewer daily sailings during the low season.

Malinda had a bit of information about recommended places to hire a motorbike but, after completely failing to find the shops they suggested, we went for the obvious one right by the pier, fully expecting to be ripped off. However, we managed to get a 125cc twist-and-go moped for four days for under 600 baht, which we were more than happy with. By Pattaya and Phuket standards, that’s a pretty good price! The lady running the rental shop was actually a little surprised when we asked for crash helmets, which we later realised was because there is next to no police presence on the island, so the chances of getting fined at a checkpoint for not wearing one are as near to zero as you can get. However, Malinda and I still strongly recommend wearing one because the roads are often overhung with branches from the nearby trees, which could do some real damage to unprotected heads.

Driving isn’t the only available method of getting around, but it is the most convenient. The island is small and Malinda did walk from place to place during her first visit, but it’s a very slow option and, if you’re visiting in the low season, it’s impossible to guarantee that the place you’re heading to will be open, meaning that you risk going quite a long distance for a wasted trip, with the added danger of having nowhere to buy food and water to keep you going. There are a few motorbike taxis, but their fares are so steep, it is cheaper to just hire a bike for a day! The roads, while narrow, are pretty solid and are mostly in good repair (barring the occasional massive puddle). As usual, exercise extreme caution and take it slow and you should be fine.

We ended up staying at the resort which is among the furthest you can get from the pier, though that decision was largely made by the fact that almost everywhere else on the island was boarded up for the low season. Phayam Coconut Beach Resort (which, in spite of the name, is on the creatively named Long Beach, or Ao Yai) has a modest selection of fairly decent bungalows with double beds, good mosquito nets, cold showers and western-style toilets, which is pretty much all we needed out of a place to stay. They also had a decent restaurant, friendly staff, free wi-fi and an awesome perch to enjoy the sunset with food and drinks from. As well as being one of only about three or four resorts we found open and on the beach, their special low season offer of 50 per cent off the usual price made each room only 300 baht per night.

​​The staff, it must be said, cannot speak English too well. They were astoundingly impressed with the little Thai I speak, but any complex concepts proved extremely hard to explain. For example, the guy checking us in accidentally gave us back the money for the deposits on the keys to the bungalows (500 baht each), but still gave us the receipt as if we’d paid it. Fearing bad karma, we tried to explain this when it came to checking out and utterly failed. In the end, we had to just give them back the money as a giant tip. Other than that minor point, however, I highly recommend the resort.

​Koh Phayam is a great place for pristine beaches and chilling out. Our position on the west coast of the island meant that we were getting the full force of the Indian Ocean, so swimming and enjoying the beach were both completely out of the question, though it would have made a good spot for Malinda to go surfing. We found that the sea off Buffalo Bay was a lot calmer, so swimming there would have been an option, but we instead just explored the rocks at the northern end and the mangroves at the southern end, as well as the half-finished bridge over the river estuary, with a pulley-powered pontoon standing in until the bridge is done (which, judging by the look of it, might be quite a long time).

​​We drove every single road on the island, even risking a little bit of off-roading. We didn’t try exploring the footpaths, in spite of the promise of interesting wildlife, because neither of us had the right footwear or that much inclination to do anything too strenuous. We were both content with chilling, whether it was at the resort, the one bar which we found open (Freedom Bar – a reggae bar with a fantastically friendly owner named Dee) or at whatever restaurants we found still serving.

Malinda was a little concerned that I wasn’t seeing the island at its best and that I maybe wouldn’t understand why she felt it was the best place in Thailand. However, even the occasional torrential rain and the fact that there were a grand total of about six tourists and not that many more locals around failed to dampen my experience. We made a couple of interesting friends, shared travel stories and thoroughly enjoyed doing very little of anything for four days. I have every intention of returning, though I will certainly be waiting for the high season before I do.

This trip was entirely self-funded. I received no special discounts or freebies from any of the organisations mentioned and I have no relationship – business or otherwise – with any person working for those organisations.