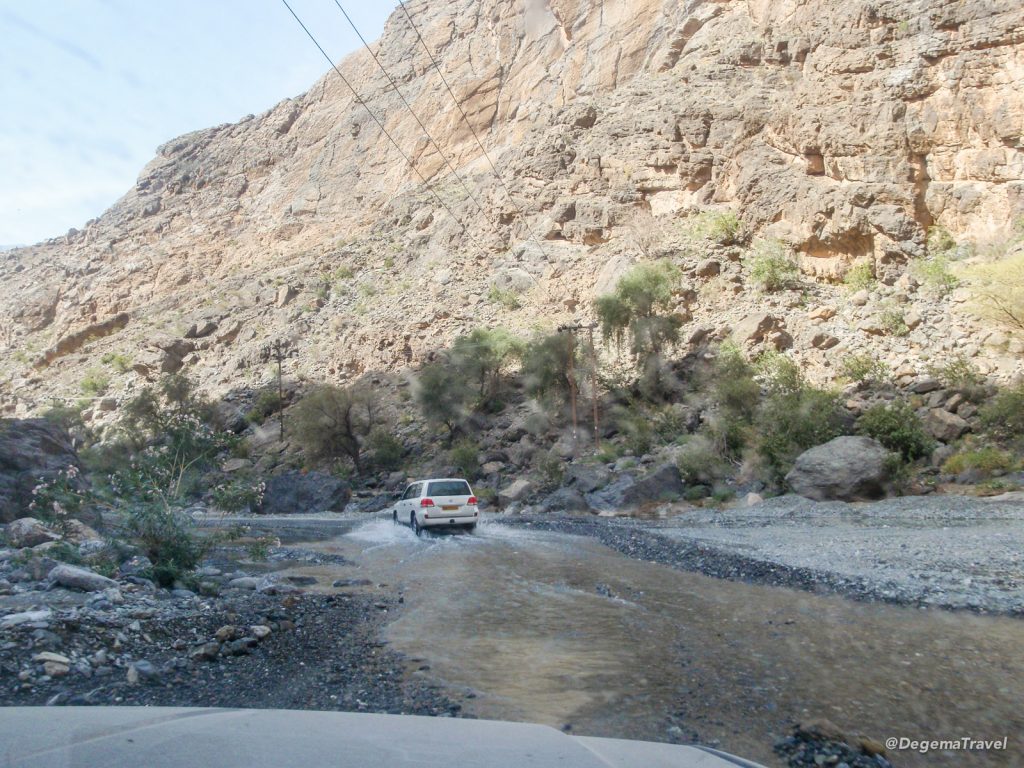 It occurs to me that people reading this travel blog might be getting the wrong impression about me and my experiences, particularly those regarding Lady Macbeth. Indeed, a friend who was planning a trip to Myanmar recently looked at my posts about the place and came to the conclusion that I hated my time there, which I didn’t. Aside from the fact that even the bad times are good (in hindsight), it seems evident that I should be telling some more of the happier stories.

In all honesty, there aren’t really that many good stories about my old Jeep Grand Cherokee. When she worked, she worked fine. She got me around Muscat, to and from work, assignments, the shops and so on in some degree of comfort and speed. There were a couple of occasions when I drove off into the countryside to go explore and, in those circumstances, she did herself proud.

One of the more memorable journeys was to Wadi Bani Awf, commonly known as Snake Gorge. This is the one part of Oman that a few Britons have heard of before. Predictably, it is only because the place takes a starring role in a news story in which a few of my fellow countrymen met their end. It often seems to me that people in the UK only know about other parts of the world where British people have died.

Snake Gorge, despite its name, is actually too deep, narrow and cold for cold-blooded reptiles to survive there. It takes its name from the way the watercourse twists and turns through the mountainous landscape. It is so narrow that, if you get even a modest rainfall at one end of the gorge, the water will come rushing down so fast that it can and has killed unwary hikers.

It is, however, a very fun hike. It’s about 4 km of walking, bouldering, swimming and leaping down waterfalls, though it is a one-way trip, so you need at least two vehicles (one at each end) to transport everyone around. The first time I went there, I was with about 10 people on a large, well-organised hike. My friend Abdulaziz, who had done the hike before, was effectively designated as our guide. I returned to do the hike a second time with him and a couple of his Omani friends and he informed me that, according to the logic of the other people in the first group, I was now a Snake Gorge veteran, having done it just once before.

On this second trip, Lady Macbeth played a pivotal role, as it was such a small group and there were only two vehicles. This was quite early on in my ownership of her, and I hadn’t quite figured out how to work the low gears for riding down sheer slopes. As such, Abdulaziz was a little surprised to find that I’d been following him down a steep gradient of loose gravel and rock just riding the brakes, in standard forward gear!

One of my first trips into the interior was with an English-teacher friend, to check out some of the noteworthy sites. These are mostly castles and forts, which Oman has a massive abundance of. For some reason, we went to some of the relatively minor ones – Nakhal and Rustaq. That’s not to say that these were not mightily impressive structures, well-preserved and restored, but they don’t have the same name-recognition as the likes of Bahla and Nizwa. If memory serves, my companion said she’d heard they were interesting and, lacking any better ideas, I took us there.

We stopped at Nakhal Fort first. Dating back to the pre-Islamic period of Omani history and extended in 1834, it required extensive refurbishing in 1990 to present the virtually as-new structure you can visit today. This seems a little incongruous when it is surrounded by collapsed mud-brick houses. Checking out a few old buildings in a nearby date grove certainly made for an interesting twist on the usual urbex experience, especially when an entire wall of one house had collapsed. Naturally, given the rather ropey state of the buildings and their seemingly historical nature, we proceeded with extreme care and caution.

The fort itself, while fascinating, was not well presented as a museum. The sights we saw lacked any kind of context. While it is an impressive place and worth a visit, don’t expect to learn all that much from the experience.

We next went to Rustaq and, once again, came across a virtually pristine fort surrounded by dilapidated housing. I don’t have any photos of the interior of the fort because, at the time, it wasn’t open to the public. According to my old ‘paper, they were only opened to the public at the end of 2013, nearly three years after I’d left the sultanate, following a protracted period of restoration.

Fortunately, we found a mini-fort on the drive back towards Muscat, which we were able to explore. Too small to justify restoration, it is just another one of the literally hundreds of towers, castles and forts in Oman, of which there are more than 500. Again, without context, it is difficult to appreciate the history of this particular one. I don’t even remember exactly where it was, other than just outside of Rustaq.

As I said at the start of this post, it is difficult to recount the good times with Lady Macbeth because, when she wasn’t playing up, she was just a car, doing exactly what cars are designed to do: Push one pedal and she goes forward, push the other and she stops (hopefully). There was nothing intrinsically noteworthy about the second of these stories because she got us to our destination and home again with no difficulty, exactly as intended.

On the other hand, this does act as a good penultimate chapter to the ongoing Adventures of Lady Macbeth. Her last ride, you see, was very similar in nature, but had a very different ending.