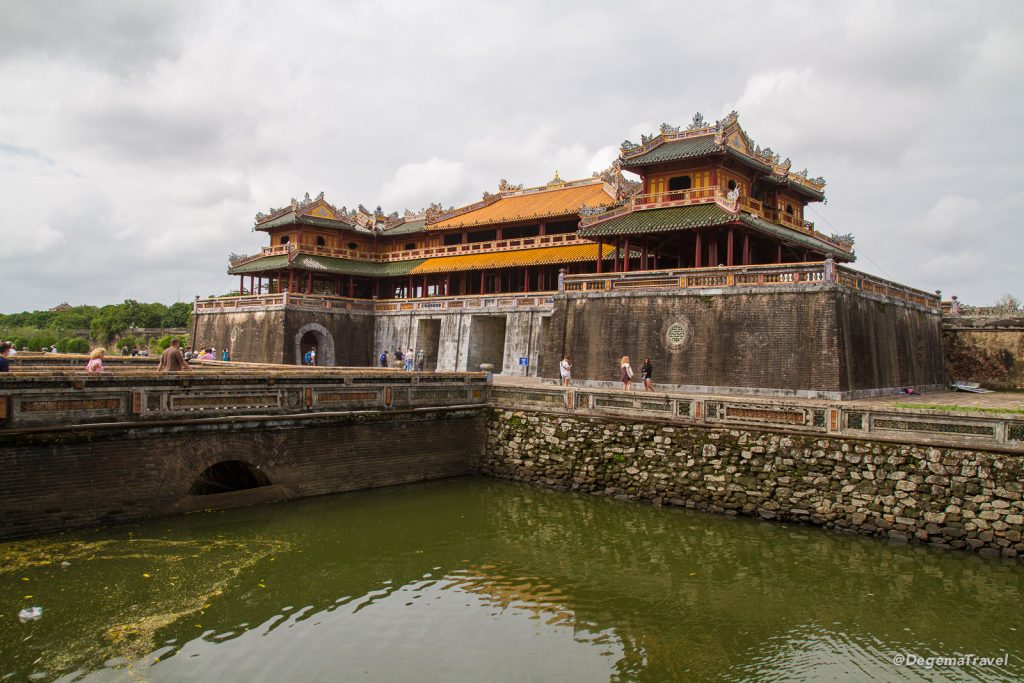 I had originally included Huế on my vague outline of a plan for my time in Vietnam not as a place of interest, but as a means to an end. One of the best bits of the Top Gear: Vietnam Special I have mentioned in previous posts was the ‘perfect road’ the hosts discovered as they left Da Nang on their way north – the Hải Vân Pass. Huế is the next big city along that coastal road and, as I was heading north to south instead of the other direction, it would therefore be my departure point.

I only realised the significance the city of Huế played in the Vietnam War once I had arrived and already explored the main attractions. It was very much glossed over on Top Gear, with no mention of the enormous siege that took place after North Vietnamese forces captured the city at the start of the Tet Offensive in January 1968, despite the fact that it’s the setting of the famous Vietnam War movie Full Metal Jacket. Based on what I’ve read since, it was a pretty black point in history for the city and the country as a whole, so it’s hardly surprisingly that the BBC would avoid mentioning it.

None of this was on my mind as, rather bleary-eyed, I stepped off the bus from Hanoi. Continuing their theme of customer disservice, the bus company was dropping us off in a residential district far from the city centre for no other reason than to make our first experience of Huế an utterly miserable one.

Progress in actually getting off the bus was slowed by the fact that every passenger was ambushed by motorbike taxi drivers as they stepped out of the vehicle. At one point, the driver and conductor had to order the riders to step back and off the bus, so eager were they to get at the newly arrived customers. As this reminded me so vividly of bad experiences with airport taxis, this morning was something of a low point in the trip.

Given that we had literally no alternative than to accept a ride from these hyenas, I moodily instructed one to head for the hostel I had hastily booked by mobile in the last stages of the bus journey – Amy Hostel. Once there, the driver offered his services as a tour guide. I finally agreed to accept a ride along the Hải Vân Pass to Da Nang from the guy the following morning, mostly on the strength of a lie. I’ll what I mean explain later.

Once I had checked in, I sat and updated my journal for a couple of hours as I’d fallen several days behind due to the fact that it’s virtually impossible to write coherently on a moving bus. This was mostly just killing time while my power bank recharged, though. As it reached 43 per cent and the grey, overcast day started to reach its middle, I headed out towards the Imperial City. From the rundown of the nearby attractions the hostel staff had given me, little else stood out as noteworthy. The other options consisted almost exclusively of tombs.

After walking down to the Perfume River and across a bridge, I made my way to the Imperial City – the seat of Vietnamese royalty up until 1945, when the country declared its independence from the French. It remains an impressive sight.

Sadly, the Citadel is not as impressive as I had hoped. It was severely damaged by first the North Vietnamese Army and then US forces in the Battle of Huế. While you can supposedly still see bullet impacts from that savage battle, it’s honestly hard to tell the battle damage from the ravages of time. That’s not actually what left me unimpressed, though.

I said in my post about visiting Mandalay in Myanmar that the palace there was profoundly underwhelming because it had been [badly] rebuilt using modern materials like corrugated metal. The result was tacky and, from a standpoint of historical appreciation, basically worthless. Well, the rebuilding of the Citadel in Huế was done with considerably more care and attention, yet left me with the same feeling.

I can’t say that I blame the Vietnamese government for choosing to restore the Imperial City to its former glory. For one thing, it’s a lot of glory – the structures they rebuilt are certainly impressive. They are definitely more attractive than the pile of pretty rubble left behind at the end of the Vietnam War. Perhaps I am only disappointed by the fact that it comes from a period of history that I feel too far removed from to be able to fully appreciate.

When I had departed from Amy Hostel, I went with two objectives. The first I had now completed – I spent a good couple of hour wandering around the Imperial City taking photos. My intention was to walk down the road for about 400 metres to the Thien Mu Pagoda, which seemed quite attractive (and wasn’t a tomb). Already a bit footsore by this point, I hoped to get there quickly, take some more pictures and head back to the hostel for a good rest.

After some time and a lot more than 400 metres, I still couldn’t even see the pagoda. I decided to check the distance on Google Maps and was shocked to learn that, when the receptionist at Amy Hostel told me the distance between the Citadel and the pagoda, I had somehow misunderstood her. It wasn’t 400 metres – it was 4,000! With a quiet curse, I about-faced and headed back.

On the way back to the hostel, I again stopped by the river and followed the Cầu đi bộ sông Hương – a sort of wood-decked promenade over the water. It seemed to be a very popular spot for the locals to gather and I sat watching people posing for photos for a while. I was kind of amused by the efforts they were going to and the sheer quantity of photos being taken, despite the fact that the backdrop was really dull and grey. Whatever makes them happy, I guess.

There was an odd-shaped building by the promenade, which I looked at as I walked by, thinking to myself: ‘hey, that’s kind of interest’. The building in question houses the Nhà hàng Festival restaurant. It wasn’t odd or remarkable enough to photograph, so I just carried on walking by without giving it a second thought.

Later, once I got back to the hostel, I was skimming through my Pinterest feed. I have a good many Vietnam War photos on there because of my interest in airsoft. Being the first (and almost only) conflict in which photojournalists got a front-row seat for much of the fighting, I use the Vietnam War as a source of inspiration for when I swap my BB gun for my camera and start taking pictures of my fellow airsoft players. As I was looking through my feed, I saw that exact same odd-shaped building from before. This time, as the photo was from 1968, it instead contained US Marines and a lot of bullet holes.

I felt more connection to Huế’s history through this photo and that building than I did at any point in the Imperial City.