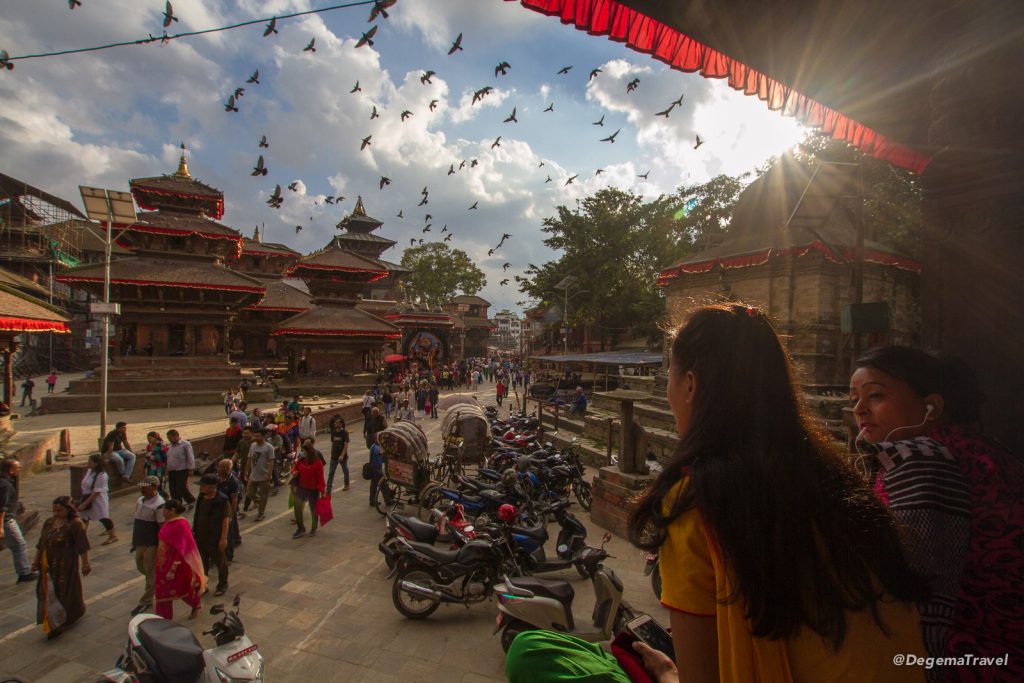 Doing the Tourist Thing in Thamel

My second day in Kathmandu saw me with only a very general plan to check out some of the attractions in the centre of the city, around the tourist hub — Thamel. I had a list of places deemed worth checking out from Anima and a second from my brother, and both proved to be pretty reliable. I also had an interest in just seeing where my feet took me. I had Google Maps on my phone and a pretty good sense of direction in my head, so I wasn’t that concerned about getting lost.

My first stop was the rather grandly titled Garden of Dreams, which had been on my brother’s list. I was keen to have as chilled-out a time as possible on this trip — a pleasant contrast from my usual perpetual stress and worry — so this proved to be a good suggestion. Dating back to 1920, it has a distinctly Edwardian English look to it. Now, I try not to be the sort of tourist who gravitates towards only those familiar foods, features and attractions, but I’ve lived outside of England for nearly a third of my life now, so a little flavour of home did me some good.

Once in the garden, its high walls and greenery blocking out the cacophonous sounds of Central Kathmandu, I took a few photos and sat on a bench by one of the water features. I updated my journal and did not much of anything — just breathed in the peace and quiet. It’s a good place to do so, if that’s your thing. I also wanted to get my money’s worth out of the experience because entry into the garden costs 400 rupees for non-Nepalis. I went and had a snack at the little café, took a few more photos and then headed off for my next stop.

After my taste of home, I wanted a little more of a taste of Nepal. Of course, the tourist hub isn’t the place to go for that, but I had already arranged to meet Anima the following day for my proper local experience. That being the case, I was content to tick off Thamel’s attractions early on in my trip.

I ended up just wandering around, taking a few photos here and there of anything that seemed interesting. At one point, a guy from Tibetan Lama Thangka Painting School stepped out of his shop and came to have a chat with me. Yes, it was patently a sales technique and I inevitably ended up in his shop, being shown a selection of very impressive paintings, but I managed to get out of there having given him nothing more than the promise that I’d consider it after I returned from my trekking tour. I wouldn’t consider my time talking to him wasted because I still had no particular plan of how to better spend my time and he at least shared some interesting information. Did you know that “Kathmandu” means ‘wooden city’, from when timber was cheap and plentiful enough to build most of the buildings out of it?

I needed to head back to my hotel room to grab my power bank as my phone was now running a little short on power. Along the way, a…let’s generously call him “wisened” chap walked up to me and slapped a dot of red powder on my forehead — what I have since discovered is called a “tika”. Very kind, I thought, until he wanted 200 rupees for his troubles. This approach to getting money out of tourists has always annoyed me, but I’ll admit that I’ve been stung for far more than 200 rupees in the past using this approach. Even so, it immediately makes me feel like the dot is less a symbol of welcome and good fortune and more like a huge neon sign reading “sucker”. The only thing that made me feel less frustrated about the incident was the fact that literally everyone I passed, tourist and local alike, had a tika. Maybe I was just overthinking again…

Power bank collected, I started to walk basically the entire length of Thamel to get to Kathmandu Durbar Square. The weather was nice and the streets were interesting, with some fascinating sights along the way. Anima had suggested this spot, it being a UNESCO World Heritage site, former royal palace and something of a hub for the city. There’s also Kumari Ghar on the southern end of the square — the home of a living goddess. That’s got to be worth a look, right?

I was rather surprised to find that there is actually a cost to enter the square. And not a small one — 1,000 rupees. It goes towards repair and restoration of the historical structures here, which is a worthy cause. However, as with the Garden of Dreams, I now had to stick around to get my money’s worth. I started wandered around and around, taking a lot of photos. I mean a lot. The total number of RAW photos I can store on all of my memory cards combined is about 1,600-1,700 and I took 550 photos in just that one day, most of them in Durbar Square.

While on my wanders, I was approached by a guide who, inevitably, was trying to sell his services. Fair enough, I guess — everyone’s got to make a living. However, it took a surprisingly amount of convincing for him to get the message that I neither wanted nor needed a guide. Before he gave up, he happened to mention that the President of Nepal was scheduled to make a visit to the square as part of some ritual for Dashain — the huge, days-long festival I’d happened to arrive in the middle of. Perfect, I thought, I now have an excuse to stick around for longer.

While staying in the square until after nightfall did pay off in the end because I got some great photos, the President’s visit was rather underwhelming. Gradually, more and more heavily armed and armoured guards had started to show up around the square, strongly suggesting something big was going to happen. Then a motorcade rolled past, not even passing through the square itself, and they all left. That was the extent of the visit that I’d waited a good four hours for!

And what of the living goddess I mentioned before? Well, it turns out that while non-Hindus are allowed to enter the house, they’re generally not allowed to meet the goddess. The same problem came up when I decided to try checking out the old Royal Palace — no non-Nepalis allowed. I can’t recall if this was just for the duration of Dashain or not, though.

You’d think that, after being charged for entering a public square, getting turned away from famous attractions and having been bombarded with salespeople the whole day, I’d be feeling pretty unwelcome by this point. Remarkably, that was not the case. You see, the everyday Nepalis around me were generally nice and friendly. However, if you’re going to hang around in the tourist hub, you have to expect to be treated like a tourist.