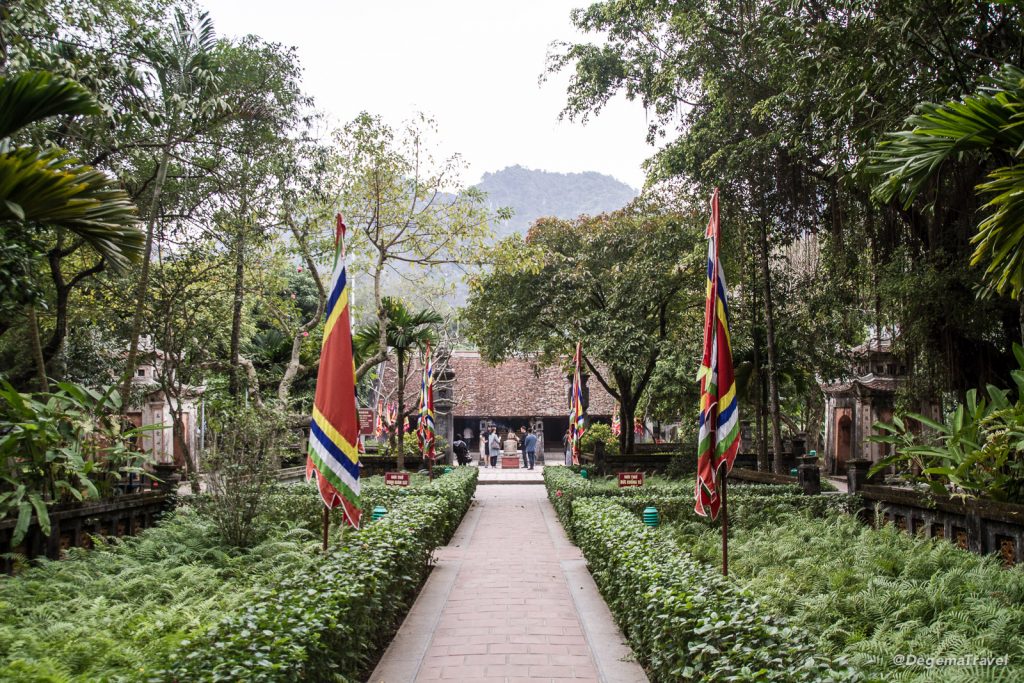 When it comes to historical edifices and their restoration, there’s a sweet spot – a fine line between completely ruined and completely rebuilt which is difficult to exactly trace. At least, there is for me. Sadly, the ancient capital of Hoa Lu missed the line by a country mile.

Allow me to elaborate a little: if you show me a selection of ditches and rocks and describe a mighty fortress or luxurious villa that once occupied the site, my imagination is put under too much strain and I fail to be inspired. On the other hand, if you slap down a modern reconstruction of the structure, my imagination is not given any room to work and I find it inauthentic.

Perhaps some examples will better explain what I mean. I personally find the ruins of Angkor Wat to be exactly the right level of ruined. There’s enough detail and structure remaining that it’s not that hard to imagine what life would have been like there, and the renovation work limits itself to just enough to keep the place from collapsing entirely. By contrast, I found the Royal Palace in Mandalay, which had been rather shoddily reconstructed using modern materials and methods, to be tacky and a complete waste of time and money to visit. Hoa Lu was, unfortunately, of a similar standard to the Royal Palace.

The long way around

After the outstanding previous day making new friends, I set out into a misty morning on my rented motorbike for a bit of solo exploration. The map that the owner of the homestay had given me still had a few marks on it which I’d yet to explore. My first target was the Hoa Lu ancient capital. Sadly, said map was not especially clear or precise and, for a second consecutive day, I managed to take a wrong turn. I took the scenic route getting there – and it certainly was scenic – but I eventually found it.

After being massively overcharged for parking, I joined the herds of fellow visitors passing through the gatehouse into…a large area of flat land with a few trees down one side. Amazingly, there were at least two or three big tour groups being kept utterly spellbound by their guides while plentiful selfies were being taken. All I can say is that those guides must be better storytellers than I because all I saw was a vacant lot.

A tale of two temples

The ticketing system was a little confusing. It seemed that you had to pay to get into one of the reconstructed temples but not the other, which was barely a minute’s walk away. The one you had to pay for was the Temple of the Dinh Tien Hoang King. If I understand the history right, he was the first ruler of Vietnam’s short-lived monarchy, which used Hoa Lu as its capital for just 42 years. It was quite a small temple and didn’t seem to justify the price, so I walked away.

The second temple was that of the Le Dai Hanh King, belonging to the dynasty that took over from the Dinhs. Based on what I could glean from the displays and peaking over the wall of the first temple, the two were similar in size and design. The gardens were pleasant and I enjoyed having a quick walk around, but the duration of my enjoyment was severely limited just by the tiny scale of the grounds.

Even padding out my visit by walking back to my bike by the most circuitous route possible, I wasn’t able to get much more out of the ancient capital and I left somewhat disappointed. If you’re looking for a travel tip for the Ninh Binh area, I would advise skipping this particular attraction. Instead, do as I did – just drive around. The scenery of the area is profoundly striking and you can enjoy it simply by following the roads as they weave and bend between towering karsts.

I eventually started heading to another point on my map: Thung Nham Bird Park. It wasn’t an easy one to reach, being at the far end of a narrow, bumpy road, I was looking forward to looking around some kind of natural reserve. When I spotted the ticket booth by the giant poster showcasing exactly the kind of tacky tourist trap I hate, I swore, parked and switched off the engine of my motorbike while I decided what I’d do next.

I have tinnitus. If you don’t know what that is, it means you didn’t see Baby Driver (2017), but the short version is I hear a loud ringing in my ears when there is no other sounds around. With my motorbike no longer humming, that’s exactly what I heard now. An insistent, deafening, total silence. It was amazing.

Then something even more amazing happened. A girl on a bicycle came peddling out of a nearby side road, her battered old bike rattling as it hit every bump and pothole in the road. Each rattle was reflected off the hills around me in one of the spookiest echos I’ve ever heard. That experience alone made driving so far out of the way completely worth it. Satisfied, I started to head back towards my homestay.

If you’ve lost track of time (because I certainly had, at the time), this second day of exploring was Christmas Eve 2018. That evening, as Father Christmas was preparing his sled team for their one busy evening of the year, I was waiting to board a bus to Sapa. I’ve had bad experiences with long-distance bus rides in the past, so I wasn’t massively looking forward to what promised to be about six hours of discomfort.

I was fairly surprised to find that the long-distance buses in Vietnam are what’s called “semi-sleepers”. The seats are, in fact, narrow bunk beds that are mostly reclined. They fit quite an impressive number in each vehicle, but part of the reason they are able to do so is that each seat/bed is not especially long. At least, not by my standards – my standards being a total height of about 6 feet 4 inches (193 cm).

While waiting for the bus, I was actually a little concerned. I’d booked it with the lady who ran the restaurant by the train station, from whom I’d also rented my bike. She’d assured me that there were seats available, despite having made no visible check. She hadn’t logged into any booking system or made any phone calls – just took my money and hand-wrote me a receipt. She then abruptly disappeared for a good 30 minutes to “help her dad out with something”, which I took to mean “leg it to the nearest travel agent and make sure there’s actually a seat”. Even after that, I still had nothing I would call an actual ‘ticket’, other than the receipt.

This proved to be enough though because, as night fell on the 24th December 2018, just outside Ninh Binh train station, I boarded the bus, took my seat (in the upper-bunk right by the bathroom) and started on my way to Sapa.