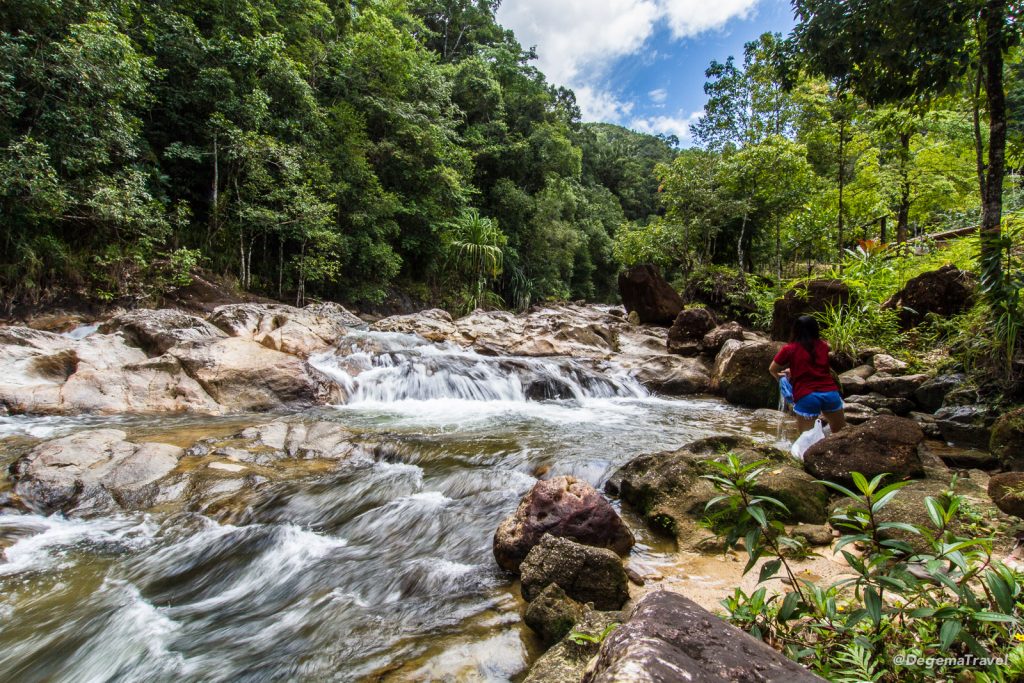 There are several activities which, when I was younger, I swore that I would never do, either because of the inherent risks or because of failing to see the point. The first was bungee-jumping, which I’ve now done twice. Next was going to a gym, which I now do four times every week. The last was whitewater rafting, which was ticked off last week.

Last Friday (28th July) was a national holiday in Thailand to celebrate the birthday of the new king – Rama X. As is increasingly the trend, many Thais took the opportunity to have a long weekend getaway, including some of my friends, who decided to go and explore the famously beautiful Phang Nga province. I still get a bit of a smug thrill out of the fact that such world-renowned destinations as Phang Nga and Koh Phi Phi are right on my doorstep, meaning that places ordinarily reserved for once-in-a-lifetime trips can be simple weekend jollies for me!

Waterfalls are a particularly popular weekend destination for Thais. The logic is fairly simple to follow: it’s a hot country, in the middle of the incredibly humid wet season, so they want somewhere cool to chill out. It’s not sunny enough for the beach and, even if it was, many Thais don’t like to get suntanned because of complex socioeconomic reasons, which I’ll explain in another post. Being in the shade of the jungle, with cold fresh water to take a dip in, waterfalls are a natural choice. The one we headed to was in the Ton Pariwat Wildlife Conservation Area, about 67 km northeast of Phuket.

This, it turns out, is a particularly popular one with tourists as well as locals and we ran into plenty of both. The draw for tourists is both the main waterfall and the river which runs downhill from it, which is just the right level of rocky for whitewater rafting. As inevitably occurs in such situations, countless effectively identical businesses have sprung up along the riverbank, offering this and other soft-adventure sports.

A Long Way to Fall

​​Veteran waterfall-chasers (assuming there is such a thing) will doubtless be scratching their heads about why Thailand has never appeared on their radar. The reason for that is pretty simple: the country has no especially spectacular falls. Probably the most noteworthy are those in the Erawan National Park, near Kanchanaburi, which I’ve yet to visit. By all reports, they are not much different from those I have seen, which include the Chantathain Waterfall near Pattaya and the Bang Niao and Bang Pae Waterfalls in Phuket. The latter was a memorable visit, way back around 2001-ish, because it required a lengthy trek along a jungle path to reach and turned out to be little more than a trickle (since it was the high and dry season at the time). Seeing as it was my idea to visit the falls and my father isn’t an adventurous (or even particularly energetic) type, I got a lot of stick for that disappointment.

All of these waterfalls, and many others, follow basically the same style – a main fall of maybe a handful of metres and then a handful of kilometres of smaller falls as the stream gradually grows into a river. Ton Pariwat Waterfall proved to be no exception, and we had to drive quite a long way up the river and then walk maybe 500 metres from the nearest car park to reach the main falls. The plunge pool there is quite wide, deep and busy, being a popular part of the standard tour package from the adventure centres we drove past on the way up there. After a brief visit, we walked back down the valley a short distance to a rocky confluence point, where two streams met. We picked a shady spot for a picnic and some photos. Swimming was not really a priority, at this point, because we knew we were going to get wetter later.

Along for the Ride

Seemingly at random (seemingly to me, though my friends were all nattering away in Thai and presumably went through some kind of process to pick it), we went to Thipthara Resort and Adventure Camp. If you’re hoping for a review of the place…well, it seemed fine to me, but it was functionally identical to all of the dozens of others around it. Probably the only notable advantages are the fact that they have a selection of riverside cabins you can stay in, a giant waterslide and they were willing to give me the discounted Thai price for the rafting, though I’m not sure why; possibly because I was with a group of three Thais, one of whom is a registered guide.

I was a little concerned when the safety briefing consisted of a dozen lines of texts on the wavier form we had to sign and the safety helmet consisted of an ill-fitting plastic cap padded with styrofoam. That didn’t make me as uncomfortable as the extremely sharp gravel they had inexplicably lined the boarding area with, though. The area was after we’d had to relinquish our sandals, but the challenge of finding somewhere out of the sun, out of everyone’s way and where I didn’t feel like the soles of my feet were being torn to ribbons at least provided a distraction until we boarded the boats.

The inflatable raft had a paddle-weilding guide at each end and a bit in the middle which comfortably seated the four of us. It had foot-gripping loops in the bottom for up to eight people, if memory serves, but they would have to be quite small people for it to not be extremely uncomfortable. There was also a web of ropes across the middle to hang onto and, with mental images of broken bones flashing through my head, I held onto that rope with every fibre of muscle I could muster! I have never yet broken a bone in my body and I did not plan to break my duck today.

This set-up, however, did mystify me. Could two guys really handle the raft on their own through rough waters? Weren’t all of the passengers supposed to chip in, too? The explanation revealed itself soon after we set off – the rapids here are not even slightly extreme. One of the guides jokingly slapped my hands off the rope after the first set of rapids, saying that it’s “only for girls and ladyboys”. Sure enough, I soon relaxed enough and realised that I could easily stay safely in the boat with just the foot straps, leaving my hands free to take pictures along the way.

To be fair, it was a fun experience. The guides were a good laugh, but they had to really work at making it feel risky, intentionally running us into rocks on three or four occasions. I suppose I can’t exactly call whitewater rafting “ticked off” because the rapids were more like sedates, but it provided an interesting view of the river and the beautiful nature preserve. Sadly, the resulting photos ended up mostly either blurred or badly exposed. I may need a new action camera to replace my ageing Olympus µTough 8010.

The day ended with watching a bit of the sunset on Natai Beach, near Khaolak (the rain clouds were closing in, making staying for the full show effectively redundant), then stopping for a seafood dinner by Sarasin Bridge, which joins Phang Nga to Phuket. It was certainly a pleasant way to spend a day off and I’m looking forward to my next jaunt across the water into the neighbouring province (yep, still smug).